Tony Kemp added an RBI double for the AL West-leading A's (24-14) against his former club in the first of five games over four days between the division rivals. Ramón Laureano provided insurance with a seventh-inning sacrifice fly and Stephen Piscotty singled home a run in the eighth.

Bassitt (3-2) struck out four and didn't walk a batter over seven scoreless innings, allowing seven hits. He had lost his previous two outings and was winless since beating the Angels on Aug. 12. 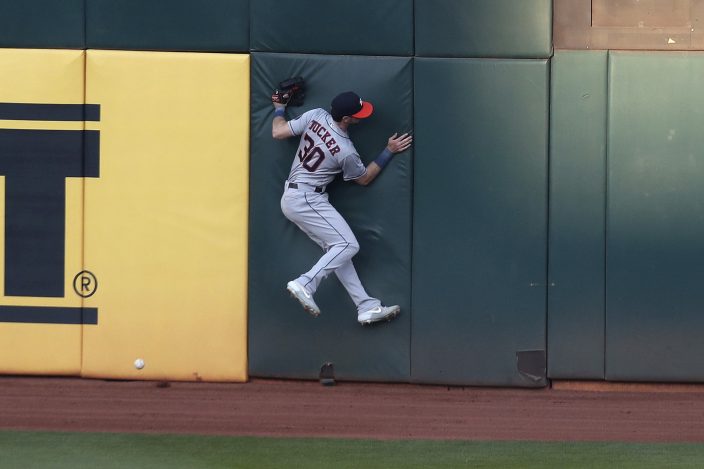 Houston Astros' Kyle Tucker crashes into the wall on a double by the Oakland Athletics' Tony Kemp during the second inning of a baseball game in Oakland, Calif., Monday, Sept. 7, 2020. (AP PhotoJed Jacobsohn)

The teams play a doubleheader Tuesday in which the opener is Houston’s home game. It is a makeup of a postponement from Aug. 30 following A’s right-hander Daniel Mengden’s positive coronavirus test result a day earlier.

Oakland missed four games in all, including three in Seattle that forces the club to play three doubleheaders in a seven-day span starting Tuesday. 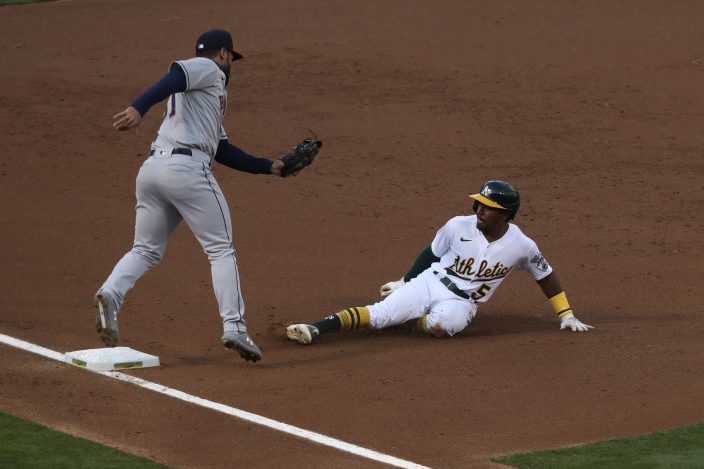 Oakland Athletics' Tony Kemp is tagged out on a steal attempt as the Houston Astros' Abraham Toro applies the tag during the second inning of a baseball game in Oakland, Calif., Monday, Sept. 7, 2020. (AP PhotoJed Jacobsohn)

The A’s had lost four of five including being swept in a doubleheader at Houston on Aug. 29 before the postponed contest the next day. They began a grueling week featuring three doubleheaders.

Oakland won 97 games each of the past two seasons but finished second in the AL West to the Astros and lost the AL Wild Card Game each time.

“Obviously we’d want to be in their spot and be up top but that’s not the case,” Astros outfielder Josh Reddick said of his former A's. “We do realize how important this series is, five games in four days, it’s going to be a grind.” 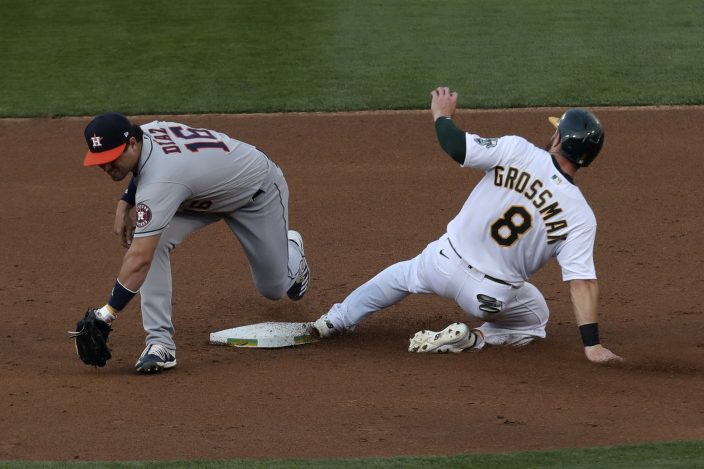 Reddick was back in the Astros lineup. He bruised his right elbow and lost feeling after hitting the wall Sunday but felt better Monday. X-rays were negative.

“No panic,” said Reddick, who reached 10 years of service time.

Houston starter Cristian Javier (4-2) was done after five innings and had his winning streak snapped at three. 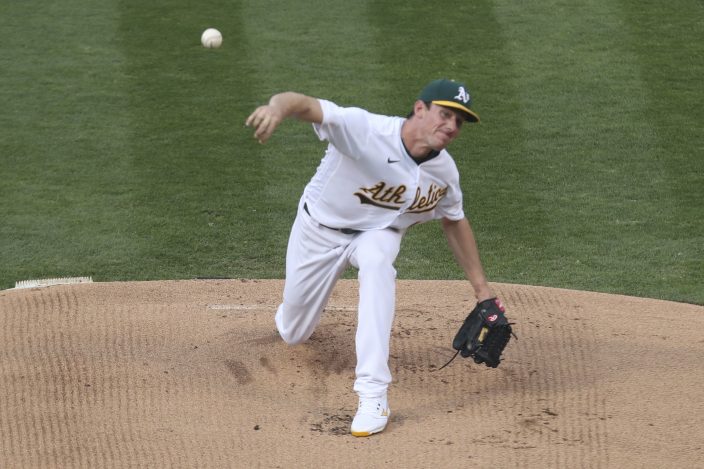 “Roberto Clemente was our Jackie Robinson. He was the greatest humanitarian this game has ever seen," Correa said. "It’s a dream come true to wear 21.” 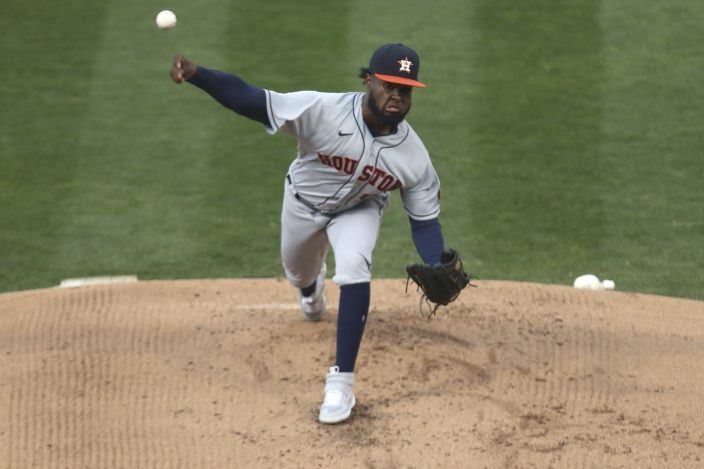 Astros: 3B Lance Bregman is expected to be activated at some point for the doubleheader Tuesday after being sidelined since Aug. 19 with a strained right hamstring he hurt that day at Colorado. “We've been really monitoring him. He's been trying to get back on the field. He knows how much we need him but at the same time we have to take care of him,” manager Dusty Baker said. “We've got a plan for him the next few days.” ... RHP Chris Devenski and LHP Blake Taylor were placed on the injured list with elbow discomfort. RHP Chase De Jong and RHP Humberto Castellanos were activated from the IL. ... RHP Lance McCullers Jr., on the IL since Sunday with neck nerve irritation, flew back to Houston following the series in Anaheim to be seen by a team doctor. “It's a nerve problem stemming from the neck and going down into the arm,” Baker said. “We're trying to calm that down.” ... 2B Jose Altuve (sprained right knee) is yet to do baseball activities. He was hurt sliding into third base during Thursday’s game against Texas and went on the IL on Saturday.

Athletics: Gold Glove 3B Matt Chapman underwent an MRI exam on his right hip that revealed tendinitis. The injury forced him out of Sunday's 5-3 series finale loss to the Padres. It's not an injury list situation yet, and manager Bob Melvin said “we'll hold out as long as we possibly can.” Chapman isn't expected to play for at least a couple of days. “He’s not happy about it, he’s frustrated,” Melvin said of Chapman sitting out this series. Chapman struck out 10 times in the three-game series with San Diego. ... SS Marcus Semien hit in the cage and was set to hit batting practice outside as well. Melvin is optimistic he will play this series, perhaps as soon as one of Tuesday's games. ... LHP A.J. Puk has further shoulder soreness and didn't throw Sunday as planned and didn't feel well enough to throw or play catch Monday. “We're shutting him down in the interim,” Melvin said, noting Puk will likely see a doctor. 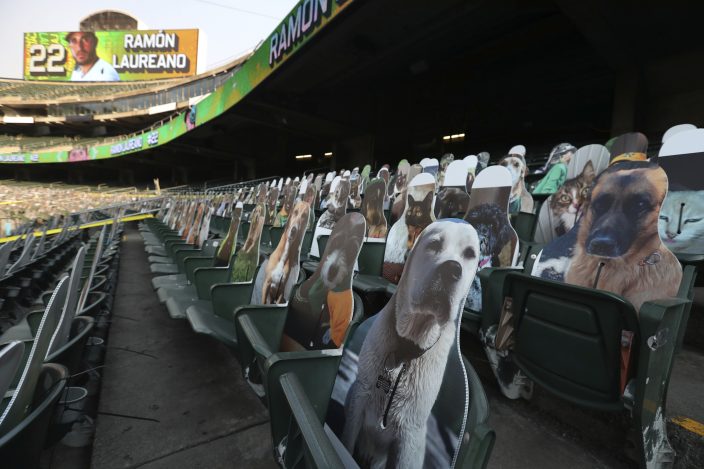 Cardboard cutouts of dogs are seen prior to the baseball game between the Oakland Athletics and Houston Astros in Oakland, Calif., Monday, Sept. 7, 2020. (AP PhotoJed Jacobsohn)

A’s RHP Frankie Montas (2-3, 6.06 ERA) is scheduled to pitch the second game of the series as the Astros counter with unbeaten RHP Zack Greinke (3-0, 2.91) trying to win his third straight start. 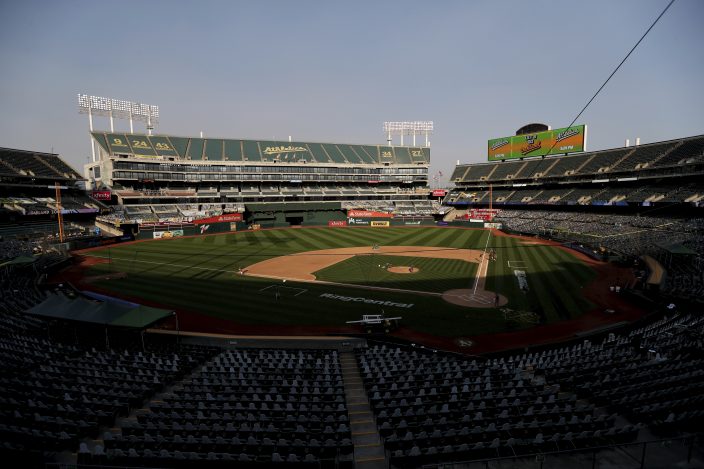 Missing the playoffs in back-to-ba ...