President Donald Trump and Democratic challenger Joe Biden are stepping up their campaign travel this week as the process of voting in the 2020 general election season accelerates. North Carolina began sending out absentee ballots last Friday and a handful of other battleground states — including Pennsylvania, Michigan and Virginia — are days away from offering early voting. 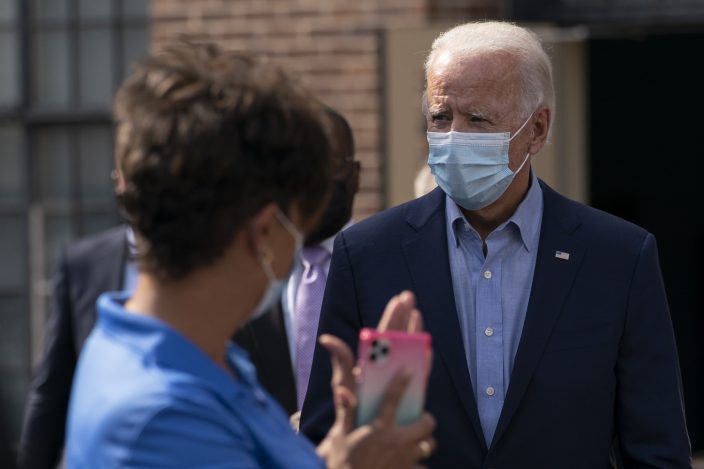 Democratic presidential candidate former Vice President Joe Biden is applauded as he arrives to pose for a photo with union leaders outside the AFL-CIO headquarters in Harrisburg, Pa., Monday, Sept. 7, 2020. (AP PhotoCarolyn Kaster)

As this critical phase begins, Trump desperately wants to keep the focus on protest-related violence — and away from the pandemic. Even as coronavirus-related deaths continue to mount under his watch, with little national strategy, his team believes last week was one of the best of the year for his political prospects as he helped guide the nation's attention toward violent protests in Wisconsin and elsewhere that could boost his standing among white, suburban voters.

While Biden is maintaining his lead in many polls, the race remains competitive in the states that matter most this fall. Biden's allies in places like the Minneapolis suburbs and western Pennsylvania are calling on him to ramp up his on-the-ground presence.

With Election Day in sight, the bright glare of the presidential race intensifies the national focus — and makes the candidates' mistakes more dangerous — as each day passes.

How long can Trump ride 'law and order'?

Public safety was the dominant theme on the campaign trail last week as both candidates traveled to America's latest epicenter of civil unrest, Kenosha, Wisconsin. Trump's team believes the focus on protest-related violence is a winning issue for him, and he'll continue to ride it as long as he can, but it's far from certain that the issue will have the same resonance in the days and weeks to come.

Biden's team began the week by pushing back as vice presidential nominee Kamala Harris on Monday met with the family of Jacob Blake, the Black man shot several times in the back by Kenosha police last month.

While the politics are delicate for both sides, at least for now, neither campaign is willing to back off.

Is Minnesota really in play?

No Republican has carried Minnesota since 1972. But Trump's team is increasingly confident about his chances in the state — even more so than in Wisconsin — and they're dwarfing Biden's television advertising budget there over the coming weeks.

We recently spoke to first-term Democratic Rep. Dean Phillips, who tells us Democrats should be taking very seriously the possibility of losing his state's 10 electoral votes — the same number Wisconsin offers. He also called on Biden to visit his suburban Minneapolis district as soon as possible.

If there's anywhere Trump's “law and order” message resonates, it could be Minnesota, an overwhelmingly white state where daily protests continue more than 100 days after George Floyd’s death. History suggests Trump has an uphill climb there for sure, but it's worth remembering that he only lost the state by 45,000 votes four years ago.

Is Biden really back on the trail?

He officially returned to in-person campaigning last week, but it is highly doubtful the Democratic nominee will ever get back to the kind of activity we're used to seeing from presidential candidates in an election's closing weeks. After appearing in Pennsylvania on Monday, he'll campaign in Michigan on Wednesday and return to Pennsylvania on Friday to commemorate the 9/11 attacks.

So far, Biden's events have been extremely small, tightly controlled and lacking any significant interaction with voters, though he talks directly to voters more often than Trump. He delivered three speeches last week with no crowd at all, save for a handful of reporters. Biden and his wife, Jill, met with just three people at one stop in Wisconsin, and even when he made an impromptu stop at a Pittsburgh-area fire station to pose for a picture, there were only about a dozen people on hand.

Biden, of course, is proceeding with extreme caution as the nation continues to battle a pandemic that has left about 190,000 Americans dead with no end in sight. But it's worth noting the strict limits he's imposing on himself as his campaign works to energize swing-state voters behind his candidacy.

Trump is mostly ignoring social distancing recommendations as he hosts more traditional gatherings of thousands of swing-state supporters, most of whom don't wear masks.

Trump and Biden will travel to Shanksville, Pennsylvania, on Friday to commemorate the anniversary of the 9/11 attacks at the site of the 2001 crash of United Flight 93. Typically, the anniversary of the deadliest attacks on American soil is a solemn day where politicians put aside politics and emphasize national unity. But this is no typical election.

Trump in particular has shown little respect for political norms or calls for unity. And it's worth noting that both candidates will be in the same town on the same day, although it's unclear if they'll have any direct interaction.

Still, the event offers an opportunity to highlight the differences in style and policy when it comes to leading the nation's military. Trump, of course, is still trying to move past the fallout of last week's explosive report that he made disrespectful comments about fallen soldiers during a 2018 trip abroad. He dismisses it as a “fake story.”

With the early voting phase getting underway, it's a good time to remind everybody just how close this election still is.

Biden's national lead may be as stable, but U.S. elections aren't decided by the national popular vote. Looking at the few recent battleground state polls that meet our standards, Biden has been statistically tied with Trump in Florida, North Carolina and Pennsylvania. He has an advantage in Wisconsin, but in Michigan, where much of the political world has written off Trump, there hasn't been a public poll that's met our standards in a month.

Let's not forget the lessons of 2016: Nobody knows how this thing will shake out.