As millions of American youngsters start the school year with online classes at home because of the coronavirus, they are running into technical glitches and other headaches that have thrust many a harried parent into the role of teacher’s aide and tech support person.

A ransomware attack forced schools in Hartford, Connecticut, to postpone the start of online and in-person classes this week. Seattle’s system crashed last week, and a Zoom outage caused it to shut down for more than two hours in August. An online learning program used in Alabama and other places recently crashed. North Carolina’s platform went down on the first day of classes last month.

Erik Rasmussen, a Falls Church, Virginia, resident who has three children taking online classes, said he regularly copes with computer glitches and short attention spans. The divorced dad has his children half the time. 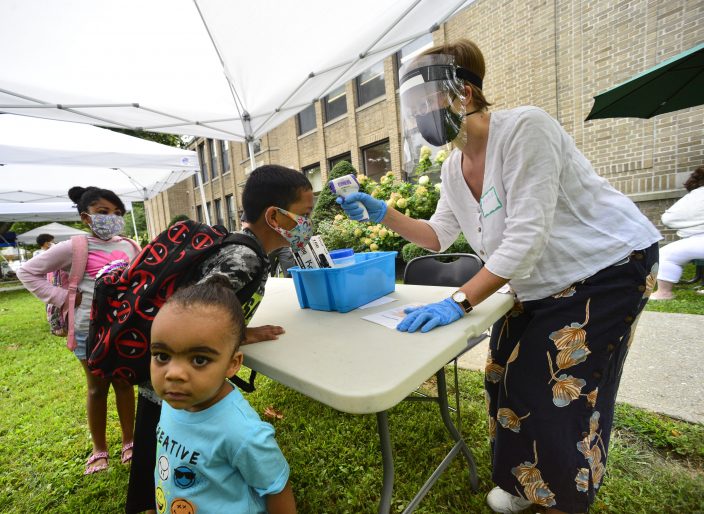 Ruth Venman-Clay, a para-educator at Green Street Elementary School, in Brattleboro, Vt., checks the temperature of Lebron Murray as he returns for his first day of school as Carter Trowell looks on Tuesday, Sept. 8, 2020. This was the first time students returned for in-person learning since March when schools closed down because of the COVID-19 pandemic. (Kristopher RadderThe Brattleboro Reformer via AP)

“You put your kids in front of the computer, and then I go to do my work, but kids are kids -- they’re going to turn off the video function and start playing a game,” he said.

Summer break gave school districts time to iron out kinks that cropped up when the virus forced them to switch to online classes in the spring. But the new school year already has been plagued by some of the same problems.

Florida’s largest school district, in Miami-Dade County, had assured parents that it had consolidated different programs into one platform that would be easier to navigate. But software glitches and cyberattacks disrupted the first week of the new school year that started Aug. 31. 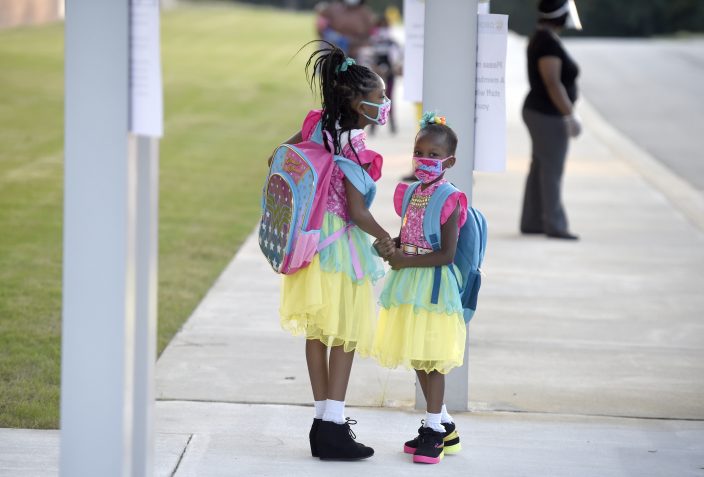 A high school student was arrested and accused of orchestrating a series of network outages. School administrators believe other people may be doing the same.

Christy Rodriguez, 36, said her third- and fourth-grade boys’ classes struggled with connection problems during the first week of school.

“Four full days were lost,” she said. “Either somebody is not able to go on, or the screen goes blank, or the teacher can’t hear the kids, so the teacher then just logs off and then sends a message to the parents.” 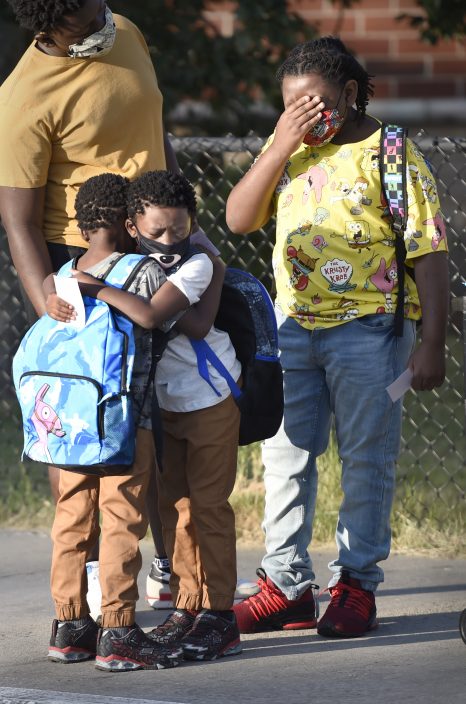 Keith Trim, from left, gives a hug to his twin brother, Vincent, both 5, as they say an emotional goodbye while accompanied by their big brother, Bricen Trim, 8, before heading into Wilkinson Gardens Elementary School for the first day of school Tuesday, Sept. 8, 2020, in Augusta, Ga. (Michael HolahanThe Augusta Chronicle via AP)

Rodriguez said she has been forced to work until late at night because her children need help fixing connection problems.

Another parent, Alessandra Martinez, said her 7-year-old son has struggled with logins, passwords and connection problems. He had a meltdown on Friday when he was moved to a smaller breakout group but didn’t see the teacher and didn’t know what he was supposed to be doing. 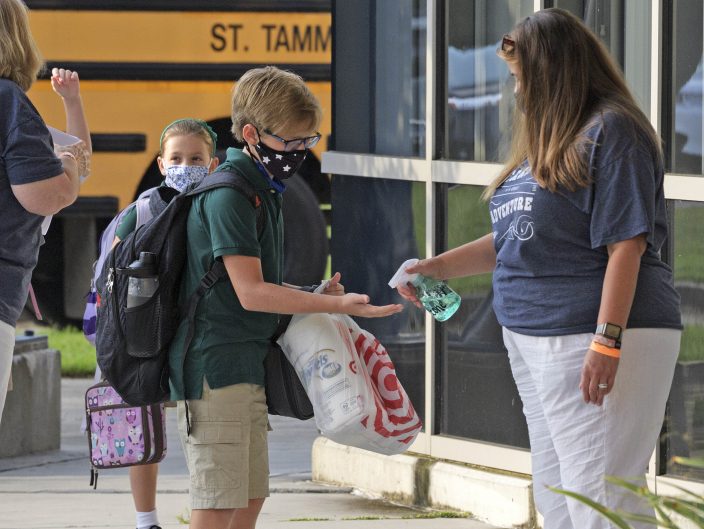 A student cleans his hands with hand sanitizer as educators welcome students on the first day of class at Lake Harbor Middle School with coronavirus restrictions Tuesday, Sept. 8, 2020, in Mandeville, La. St. Tammany Parish schools are opening with a quarter of students returning to school each day this week to assist in coronavirus precautions along with temperature checks, hand sanitizing at the door and face masks. (Max BechererThe Advocate via AP)

“At their age, everything is amplified, and it feels like a big deal,” Martinez said.

Martinez said she was against the school district using a product commonly employed by parents who homeschool.

“This is a homeschooling program, but for parents who are working from home and have multiple children, it is a bit overwhelming,” she said. “We have this set up as a one-size-fits-all, and it doesn’t work for everybody.” 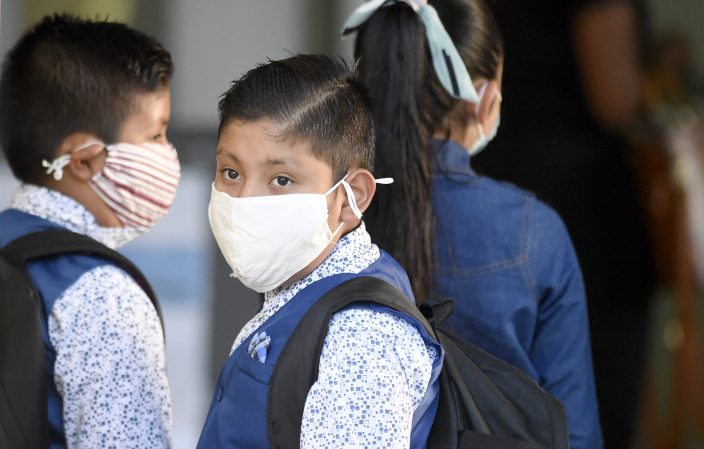 Students will be able to do five-day-a-week in-person instruction starting on Sept. 14 if their parents choose. Parents can opt for fully virtual learning instead.

“It was our intention all along that we wanted to have a cautious start,” said Shelby County schools spokeswoman Cindy Warner. “Along the way, we’ve monitored our data and looked at the state and county data to make sure that the number of cases have remained low.” 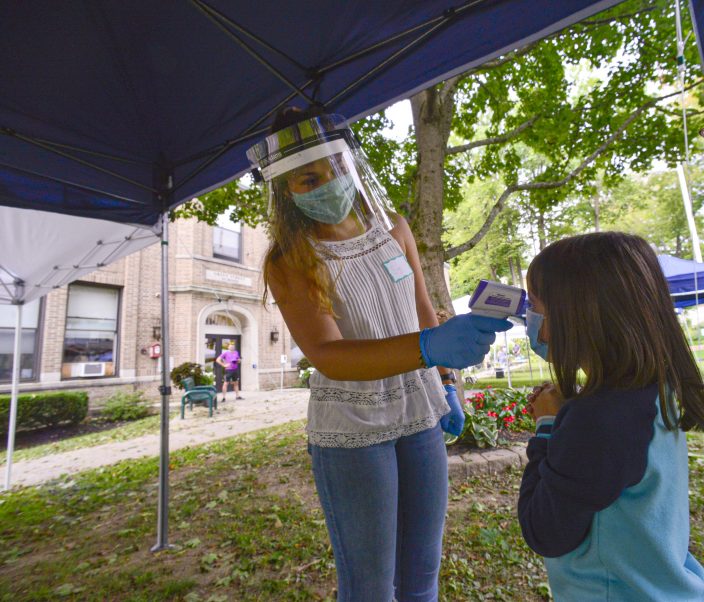 Evy Williams, a health screener at Green Street Elementary School, in Brattleboro, Vt., checks the temperature of Bralynn Earle, before her first day of kindergarten on Tuesday, Sept. 8, 2020. This was the first time students returned for in-person learning since March when schools closed down because of the COVID-19 pandemic. (Kristopher RadderThe Brattleboro Reformer via AP)

In Hartford, where the first day of school was supposed to be Tuesday, a new start date has not been announced. The ransomware attack crippled critical systems, including one used to supply transportation routes to a school bus company.

This story has been corrected to delete mention of Rasmussen having a child who is in college.