Dustin Johnson won the silver trophy as the FedEx Cup champion. Odds are he soon will pick up another trophy, this one a bronze variety in the image of Jack Nicklaus.

The vote for PGA Tour player of the year was up in the air going into the Tour Championship, with only one major being played and six players with multiple victories. The winner at East Lake was thought to be the front-runner. Johnson's victory gave him three titles this season, tied with Justin Thomas.

With the short turnaround to the new season — two days between the final putt at East Lake and the opening drive at the Safeway Open in California — the ballots were going out this week to the players. 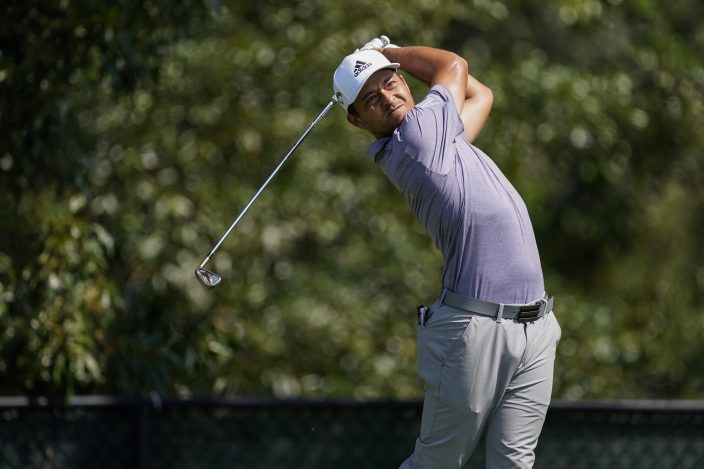 Scottie Scheffler hits his tee shot on the third hole during the third round of the Tour Championship golf tournament at East Lake Golf Club in Atlanta, Sunday, Sept. 6, 2020. (AP PhotoJohn Bazemore)

Thomas won his three in October, January and August, all against strong fields, all three of his victories against limited fields that had no cut (CJ Cup in South Korea, Sentry Tournament of Championship and a World Golf Championship). Johnson won the Travelers Championship and The Northern Trust to go along with his FedEx Cup title he won at the Tour Championship. He also was runner-up to Morikawa at the PGA Championship.

More interesting will be the vote for PGA Tour rookie of the year. 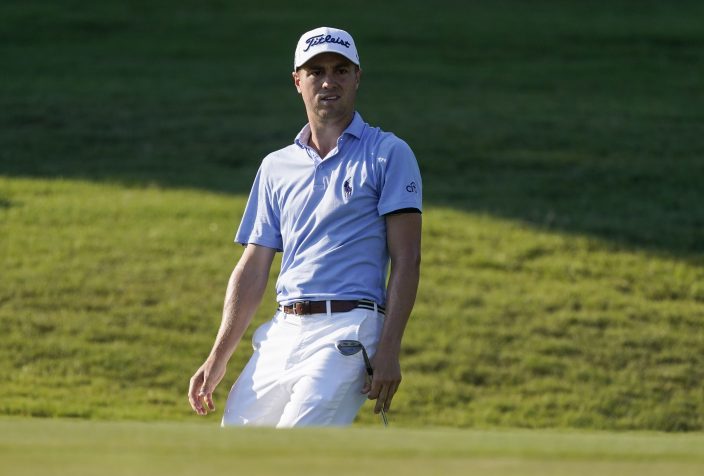 Justin Thomas reacts after he misses a putt for eagle on the 18th hole during the final round of the Tour Championship golf tournament at East Lake Golf Club in Atlanta, Monday, Sept. 7, 2020. (AP PhotoJohn Bazemore)

The race is between Scottie Scheffler and Viktor Hovland, with Harry Higgs and Maverick McNealey added to the ballot, presumably to fill space.

Hovland is the only rookie to have won this year, at the Puerto Rico Open the same week as the World Golf Championship in Mexico City where Scheffler was playing.

They were the only rookies to reach East Lake, and Scheffler had a 66-65 weekend to finish alone in fifth. Hovland tied for 20th at the Tour Championship. So it's a matter of how much players who vote value a victory, even against a weak field that didn't include anyone from the top 50. 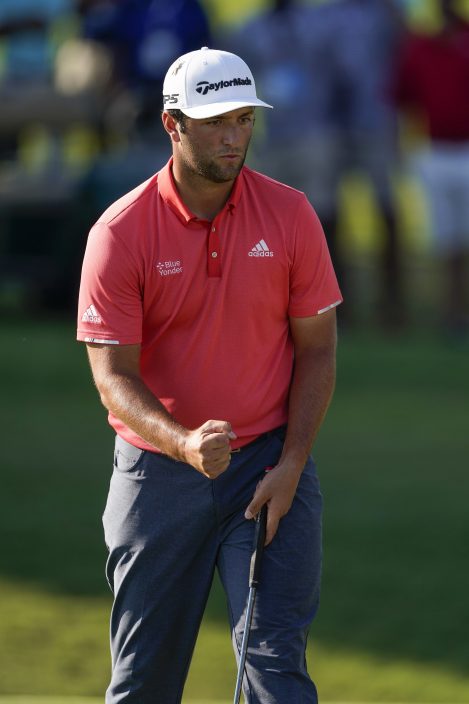 Jon Rahm reacts after making a putt for birdie on the 18th hole during the final round of the Tour Championship golf tournament at East Lake Golf Club in Atlanta, Monday, Sept. 7, 2020. (AP PhotoJohn Bazemore)

Scheffler had seven top 10s, compared with three for Hovland. He also played in the final group at the PGA Championship, where he tied for fourth.

Meanwhile, Webb Simpson wrapped up the Vardon Trophy for the lowest adjusted scoring average. Thomas won the money list with $7,344,040. It was the third time in the last four years Thomas has won the money title, even though the tour stopped presenting an award for that.

Thomas will get a trophy from the PGA of America for its points-based award for player of the year. Because golf was not played for three months, the race ended before the Tour Championship. Thomas won on the strength of three wins (each worth 10 points), 20 points for winning the money list and 16 points for being third in scoring average. 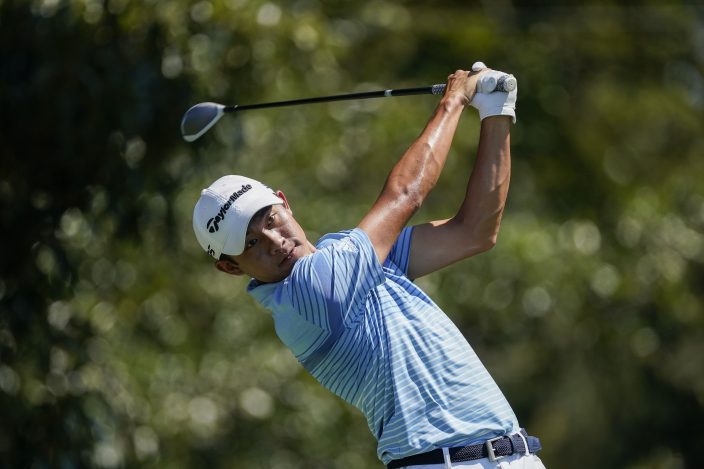 Collin Morikawa hits his tee shot on the third hole during the final round of the Tour Championship golf tournament at East Lake Golf Club in Atlanta, Monday, Sept. 7, 2020. (AP PhotoJohn Bazemore)

Augusta National announced last month that spectators would not be allowed when the Masters is played in November. That’s not to say the course will be entirely empty.

Players in the field learned last week in a letter from the club that they will be allowed to bring their spouses or significant others. Left unclear, and probably unlikely, is whether that guest list will extend to parents, siblings and other family members. 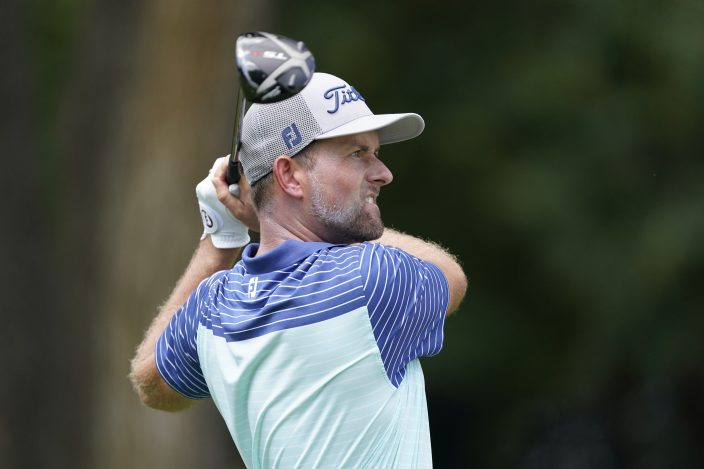 Competitors typically get eight guest passes for the Masters.

For the spouses or partners coming for the first time, it will be an Augusta National they’ve never seen, mainly because they will be able to see without having to look over the shoulders of thousands of spectators. But they will miss out on the sounds of the Masters, which can be as memorable as the scenery.

Sebastian Munoz is among the newcomers to the Masters and hopes his girlfriend can get the best of both worlds. He qualified for this year’s Masters (originally to be played in April) by winning the Sanderson Farms Open last September. He also will be in the next Masters because he reached the Tour Championship.

Sebastian Munoz tees off on the first hole during the second round of the Tour Championship golf tournament at East Lake Golf Club in Atlanta, Saturday, Sept. 5, 2020. (AP PhotoJohn Bazemore)

“It would be difficult if her only Masters was without fans,” Munoz said. “Hopefully, they’ll be there for the next one.”

SO MUCH FOR PLANNING

Rory McIlroy and his wife, Erica, learned they were expecting their first child over the holidays while in Ireland, and some quick math would have shown perfect timing. She was due in early September, right after the FedEx Cup season ended. 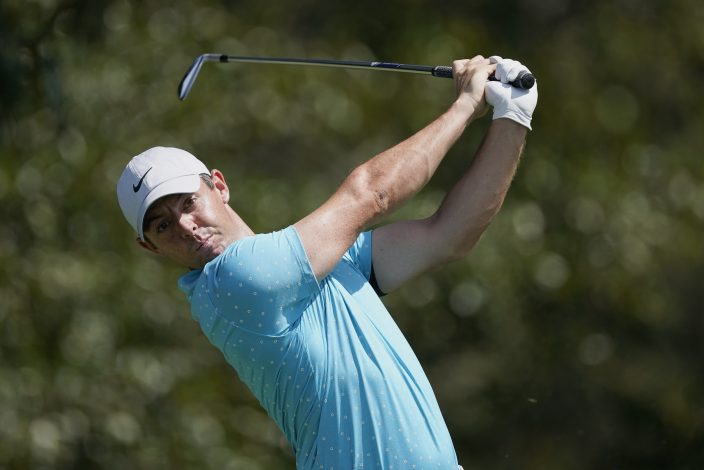 Rory McIlroy hits his tee shot from the third hole during the third round of the Tour Championship golf tournament at East Lake Golf Club in Atlanta, Sunday, Sept. 6, 2020. (AP PhotoJohn Bazemore)

“I was expecting a very quiet fall,” McIlroy said. “I thought, ‘October, November, December, three months at home watching my daughter grow up a little bit. That’ll be nice.’”

And then golf shut down for three months because of the COVID-19 pandemic, which upended the calendar.

Poppy Kennedy McIlroy was born two weeks before the U.S. Open. Still to come is the Masters in November, another shot for McIlroy to get the career Grand Slam.

After the U.S. Open, McIlroy plans to play the CJ Cup at Shadow Creek in Las Vegas, and the following week in the Zozo Championship at Sherwood in California. Two weeks later he has the Masters, and that’s it.

Reaching the Tour Championship comes with the perk of being exempt for the Masters, U.S. Open and British Open, and the PGA Championship was virtually a lock because it’s based on a money list and all 30 players at East Lake would have earned enough, anyway.

But the cancellation of the British Open this year due to the pandemic presented a different scenario.

The R&A sent out a notice last week saying it will honor all exemptions that had been decided by April 6, the day the 149th Open was pushed back to 2021. At the time, 106 players were exempt for the 156-man field.

“With only 50 places left for all qualifiers and new exemptions, there will be a reduction in the number of places available at certain championships and money lists over the year,” the R&A said. “That includes the Tour Championship.”

Of the 30-man field this year, 16 were not at East Lake a year ago, a list that includes Scottie Scheffler and Harris English, Mackenzie Hughes and Billy Horschel. Two others, Joaquin Niemann and Cameron Smith, would have made it to Royal St. George's this year from being on the Presidents Cup team.

The R&A is reviewing how to fill the final 50 spots. Among the last to get in was Joel Dahmen, who tied for fifth at the Arnold Palmer Invitational. That was the last of the International Final Qualifying series before the pandemic shut down golf.

Two other IFQ sites in America, the RBC Canadian Open and John Deere Classic, were canceled this year. Another was the Travelers Championship, where the two spots would have gone to Hughes and Kevin Streelman. But then, that was held after the Open had been canceled.

“Players should not make assumptions about exemptions based on previous years’ events,” the R&A said.

The 30-man field at the Tour Championship was represented by a 12 countries, the most since the FedEx Cup began in 2007. Every continent had at least two players except for Africa, which had none. ... For the first time, the average age of the 30 players was at East Lake was under 30 (29.33). Ryan Palmer (43) was the only player in his 40s. ... Americans have won four of the nine LPGA events that have been held this year. ... Country singer Colt Ford, who once played professionally, is making his PGA Tour Champions debut on a sponsor exemption. The other sponsor exemption has gone to Gary Nicklaus.

The ANA Inspiration is missing seven out of the top 20 in the women's world ranking, all from Asia, because of travel involved amid the COVID-19 pandemic.

“When I went through all three stages of Q-school and got my tour card, I think they gave me a $25,000 check. I thought I was rich because I didn’t have but a couple hundred bucks in my bank account probably.” — Dustin Johnson, after winning the $15 million prize as FedEx Cup champion.