Khris Davis homered and hit an RBI double against previously unbeaten Zack Greinke, and the Oakland Athletics sent the Houston Astros to their sixth straight loss, 4-2 Tuesday in the first game of a doubleheader.

Ash from nearby wildfires fell inside the Coliseum as the A's stretched their AL West lead over second-place Houston to 5 1/2 games.

Robbie Grossman hit a go-ahead double in the sixth and Ramón Laureano added an RBI single for Oakland.

Oakland Athletics' Khris Davis hits an RBI double against the Houston Astros during the sixth inning of the first baseball game of a doubleheader in Oakland, Calif., Tuesday, Sept. 8, 2020. (AP PhotoJed Jacobsohn)

The A's played as the visiting team in a makeup of a postponement from Aug. 30 after pitcher Daniel Mengden’s positive coronavirus test result. Oakland missed four games in all, including three in Seattle that forced the club to play three doubleheaders in a seven-day span that began Tuesday.

Davis, the major league homer leader in 2018, snapped an 0-for-8 stretch playing for the first time since Aug. 26 at Texas. He began the day 3 for 8 lifetime against Greinke with a home run and a double. 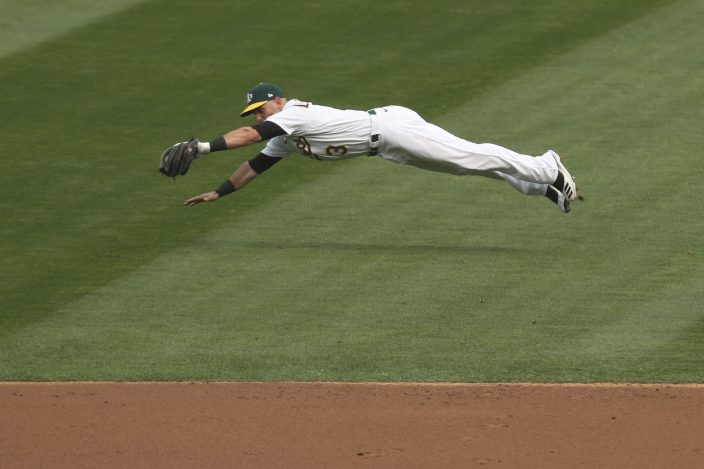 Michael Brantley hit a two-run homer in the fifth for Houston. The Astros' losing streak is their longest since a seven-game skid in June 2019. 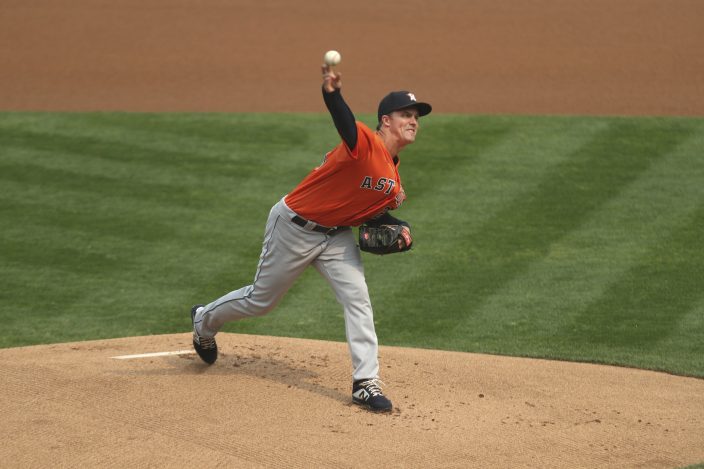 Houston Astros' Zack Greinke throws to an Oakland Athletics batter during the first inning of the first baseball game of a doubleheader in Oakland, Calif., Tuesday, Sept. 8, 2020. (AP PhotoJed Jacobsohn)

Astros: Houston activated 3B Alex Bregman from the 10-day injured list, making him the 29th player for the doubleheader. He batted second in the first game to try to get him as many at-bats as possible “to find his stroke.” He went 0 for 3, striking out twice with a walk. He had been sidelined since Aug. 19 with a strained right hamstring he hurt that day at Colorado. ... 2B Jose Altuve (sprained right knee) did some running as he resumed baseball activity. “He went out and ran today and he looked pretty good, he looked real good actually,” manager Dusty Baker said. Altuve was hurt sliding into third base during Thursday’s game against Texas and went on the IL on Saturday. ... RHP Lance McCullers Jr., on the IL since Sunday with neck nerve irritation, underwent a procedure in Houston that alleviated much of the discomfort.

Athletics: SS Marcus Semien returned from a four-game absence with a left side injury. Manager Bob Melvin will determine his lineup each day based on how Semien feels. ... RF Stephen Piscotty was a late scratch for the first game because of left wrist soreness. ... 3B Matt Chapman hopes to do some baseball work Wednesday but doesn't necessarily expect to return this series from right hip tendinitis that forced him out of Sunday's series finale against San Diego. “We’re just kind of waiting it out and seeing if we can calm down that area," Chapman said. "It’s something that had kind of been bugging me this whole season. It didn’t feel like I had my legs under me. ... Once I started playing defense and I was having to think about every step I took, it’s hard enough to go out there and compete when you have a clear mind.”

The A’s recalled RHP James Kaprielian from their Sacramento alternate site to be the 29th player for the doubleheader.

Beating the goalie: Equipment changed how position is p ...

With new protests outside, Man United loses 4-2 to Live ...

The beefed-up defense outside Old ...