Rookie Gavin Lux hit two homers, including a three-run shot in the 10th inning, and the Los Angeles Dodgers rallied from four runs down to beat the Arizona Diamondbacks 10-9 on Tuesday night.

In the decisive 10th inning, A.J. Pollock started on second base and advanced to third on Cody Bellinger’s fly ball to left. Max Muncy was intentionally walked and Pollock scored on an error by Eduardo Escobar, who mishandled Chris Taylor's grounder.

Lux followed with a towering homer that landed deep in the right-field seats and made it 10-6. It was the 22-year-old prospect’s first multihomer game in the big leagues. 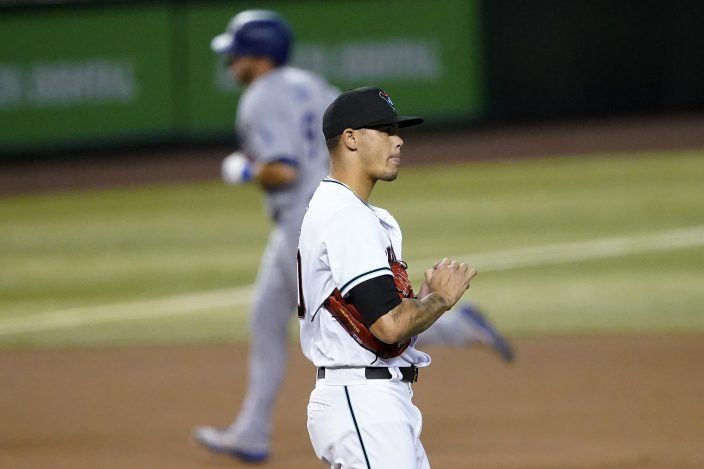 Arizona nearly fought back in the bottom of the frame. Christian Walker hit a two-run homer to make it 10-8 and David Peralta's single brought home Escobar for a 10-9 margin. Kenley Jansen (3-0) struck out rookie Wyatt Mathisen to end the 4-hour, 25-minute game.

The Dodgers bounced back from two straight losses and improved to 31-12 for the season. The disappointing Diamondbacks lost for the 17th time in 19 games.

Arizona built a 6-2 lead after six innings but the Dodgers fought back in the seventh to even the score. Edwin Rios had a two-run double during the rally and Mookie Betts brought home the tying run on a one-out single up the middle. The Dodgers would have taken the lead, but D-backs shortstop Josh Rojas snagged a sharp grounder as he was dragging a foot across second and then threw to first for the double play. 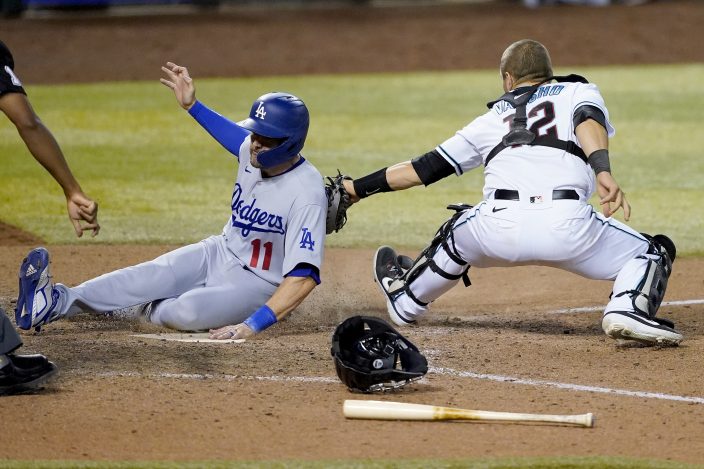 CORRECTS TO GROUND BALL, INSTEAD OF BASE HIT - Los Angeles Dodgers' A.J. Pollock scores on a ground ball by Chris Taylor as Arizona Diamondbacks catcher Daulton Varsho makes the late tag during the 10th inning of a baseball game Tuesday, Sept. 8, 2020, in Phoenix. (AP PhotoMatt York)

The D-backs had a chance to win in the ninth before Tim Locastro's baserunning blunder. The speedy outfielder walked and then stole second with two outs. Catcher Austin Barnes' throw bounced into the outfield and Locastro easily took third before inexplicably trying for home. He was thrown out easily.

Dodgers All-Star pitcher Walker Buehler looked dominant early in his second start since his return from the injured list because of a blister on his right hand. He retired the first seven hitters he faced, slicing through the D-backs lineup with a fastball that touched 101 mph.

But Diamondbacks rookie Daulton Varsho snapped that streak by lifting a high fly ball down the left-field line that banged against the foul pole as it barely cleared the fence for a homer and tied the game at 1-all. 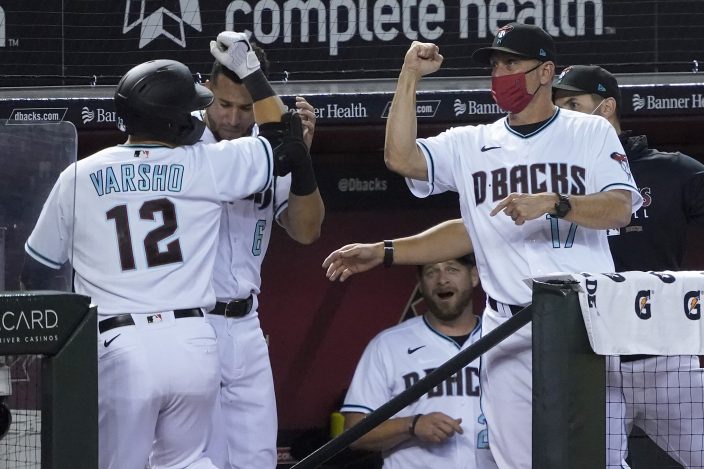 From there, Buehler's night unraveled quickly. Locastro and Josh Rojas hit one-out singles and Ketel Marte reached first on a throwing error by Lux on a play that scored Locastro. Christian Walker followed with a fielder's choice that scored Rojas, and Calhoun finished the rally with a two-run homer that pushed the Diamondbacks ahead 5-1.

Suddenly, Buehler was out of the game. He lasted just 2 2/3 innings and gave up five runs, though only two were earned. More worrisome for the Dodgers is the pitcher's blister issue might be a lingering problem — he was seen on TV picking at his right index finger in the dugout.

The Dodgers jumped ahead 1-0 in the second inning when Lux hit an opposite-field homer that just cleared the left-field fence. It was his first homer of the season. 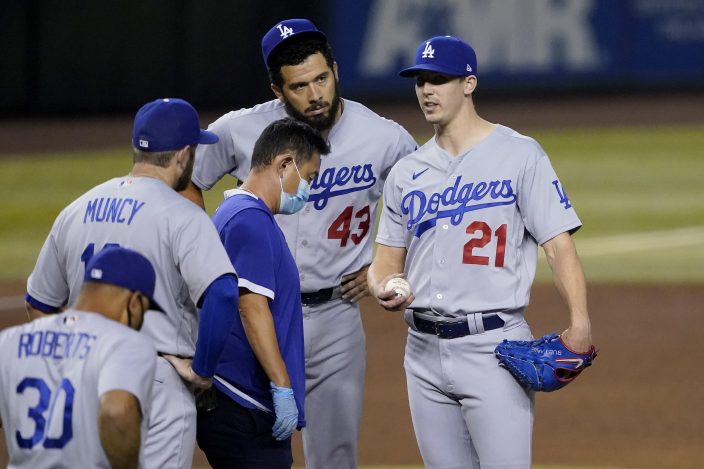 Los Angeles Dodgers starting pitcher Walker Buehler (21) is checked by the trainer during the third inning of a baseball game against the Arizona Diamondbacks, Tuesday, Sept. 8, 2020, in Phoenix. (AP PhotoMatt York)

The Dodgers won despite leaving 15 men on base.

Yoan López (0-1) took the loss, giving up four runs, including three earned, in one inning.

Los Angeles outfielder Joc Pederson was placed on the paternity list and replaced on the roster by right-handed pitcher Josh Sborz. The 26-year-old has appeared in eight big-league games with the Dodgers, including one earlier this season. Dodgers: LHP Clayton Kershaw (5-1, 1.50 ERA) takes the mound for Los Angeles. The three-time Cy Young Award winner is in the running for a fourth after six excellent starts to begin the abbreviated season. Diamondbacks: RHP Taylor Clarke (1-0, 2.96) has pitched fairly well since joining the team's injury-depleted starting rotation. This will be his fourth start of the season. 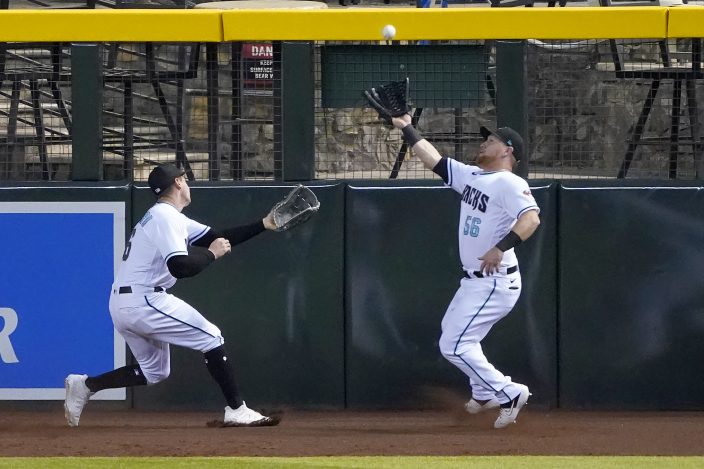 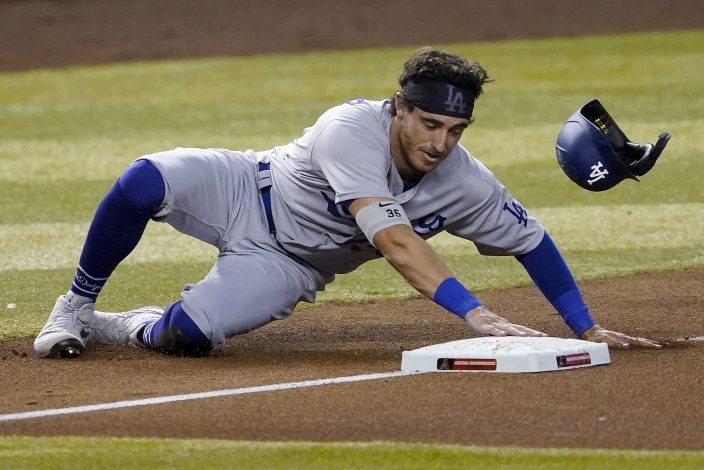 Los Angeles Dodgers' Cody Bellinger slides safely into third on a base hit by teammate Max Muncy against Arizona Diamondbacks during the third inning of a baseball game, Tuesday, Sept. 8, 2020, in Phoenix. (AP PhotoMatt York) 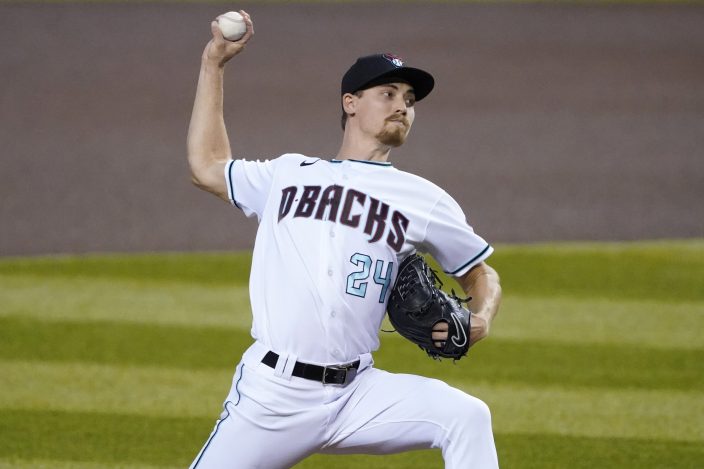