Ramón Laureano, suspended last month for charging the Houston dugout and triggering a bench-clearing brawl, hit an RBI single with two outs in the ninth inning that lifted the AL West-leading Oakland Athletics over the Astros 3-2 Wednesday night.

Laureano yelled over and over as he celebrated yet another walkoff win by the A's. They increased their division lead to 5 1/2 games over second-place Houston.

Tommy La Stella hit a tying, two-run double in the seventh before Laureano came through against Ryan Pressly (1-2). Pressly allowed Sean Murphy's leadoff walk before hitting Tony Kemp in the foot as he pulled his bat back from a bunt attempt. 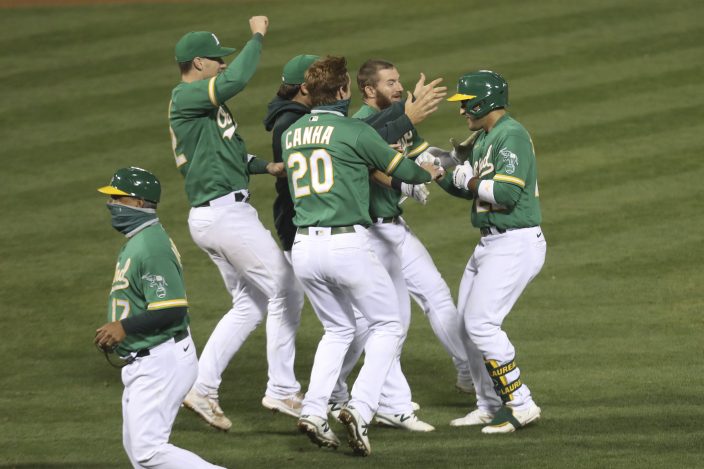 Oakland Athletics's Ramón Laureano celebrates with teammates after his single drove in the winning run against the Houston Astros during the ninth inning of a baseball game in Oakland, Calif., Wednesday, Sept. 9, 2020. (AP PhotoJed Jacobsohn)

Laureano was suspended four games in August for his role in the benches-clearing fracas at the Coliseum, which began after he was hit by a pitch. Houston hitting coach Álex Cintrón received a 20-game suspension and a fine.

Jesús Luzardo pitched a career-best seven innings for the A's before Joakim Soria went 1-2-3 in the eighth. Liam Hendriks (3-0) got the win.

George Springer and Yuli Gurriel homered for Houston, which snapped a six-game losing streak with a win in Game 2 of Tuesday's doubleheader. 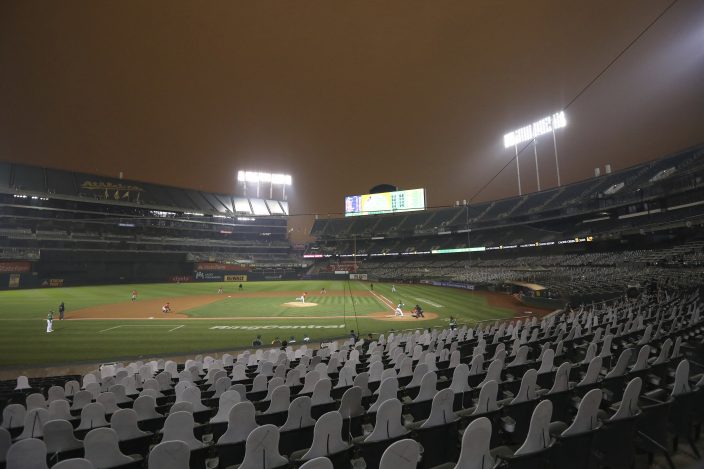 Astros rookie Luis Garcia hung tough with Luzardo in a pitching matchup of prized rookies on an eerie Bay Area day during which the dark sky glowed orange from wildfire smoke that blocked the sun. Ash covered the green seats.

Shortstop Carlos Correa stole a likely run from the A's with his strong throw on Laureano's groundout in the sixth.

Houston is nearly done with a grueling three-city road trip featuring 11 games over 10 days. The Astros are 6-16 away from Minute Maid Park. 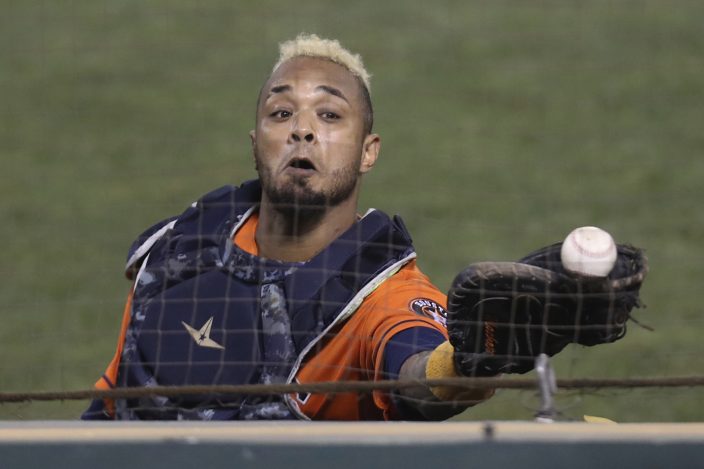 Garcia became the fifth rookie to start a game for the Astros this season and 15th to pitch for Houston overall in 2020.

Astros: 3B Alex Bregman sat out aside from a pinch-hit appearance after being activated Tuesday from the 10-day injured list and playing the doubleheader opener. He is scheduled to play Thursday afternoon's finale then after Friday's off day try back-to-back games this weekend at Dodger Stadium. Bregman had been sidelined since Aug. 19 with a strained right hamstring he hurt that day at Colorado. ... 2B Jose Altuve (sprained right knee) took groundballs mostly directed right at him. “We didn't have him go to his right or left too much,” manager Dusty Baker said. “He looked pretty good the balls right at him. You're a bit worried about his lateral movement.”

Athletics: SS Marcus Semien was back leading off after he returned in Tuesday's opener from a four-game absence with a left side injury before sitting the nightcap. ... RF Stephen Piscotty, a late scratch for the opener Tuesday because of left wrist soreness, received an injection that will sideline him for a couple of days. ... 3B Matt Chapman didn't begin baseball activity as he had hoped. He is dealing with right hip tendinitis that forced him out of Sunday’s series finale against San Diego.

The Astros activated RHP Josh James from the injured list and optioned C Garrett Stubbs to their alternate site.