Chris Taylor and AJ Pollock each hit a run-scoring single in the 10th inning and the Los Angeles Dodgers overcame a rare off night for ace Clayton Kershaw to beat the Arizona Diamondbacks 6-4 on Wednesday.

Los Angeles tied the game with two runs in the fourth and its bullpen held to send the game into extra innings. 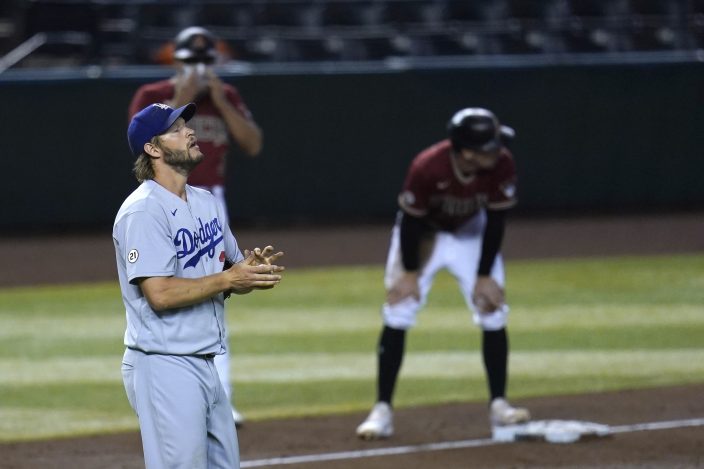 Los Angeles Dodgers starting pitcher Clayton Kershaw rubs up a new baseball after giving up an RBI triple to Arizona Diamondbacks' Tim Locastro, who stands next to Diamondbacks third base coach Tony Perezchica during the second inning of a baseball game Wednesday, Sept. 9, 2020, in Phoenix. (AP PhotoRoss D. Franklin)

Jake McGee (3-1) struck out two in the ninth and Taylor lined a single off Kevin Ginkel (0-2) after Corey Seager started at second base under baseball's new extra-inning rules.

Pollock made it 6-4 with a single off Hector Rondon, and Blake Treinen worked a perfect 10th for his first save in the Dodgers' seventh straight win over Arizona.

Mookie Betts and Kiké Hernández each hit a solo homer for the NL West leaders. 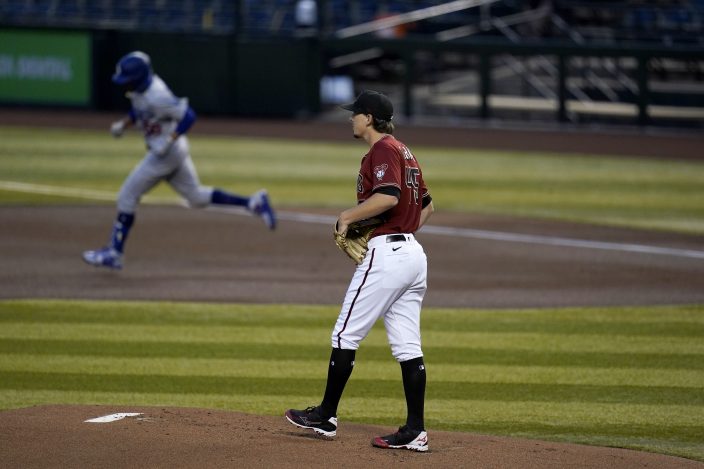 Kershaw arrived in the desert on a four-game winning streak, but spent the early part of Wednesday's game struggling to locate breaking balls and muttering to himself.

Arizona loaded the bases with no outs against Kershaw in the second and took a 3-2 lead on a groundout, Jon Jay's sacrifice fly and Tim Locastro's triple. The Diamondbacks tied it 4-all in the fifth on Nick Ahmed's double and Betts' double error in right. 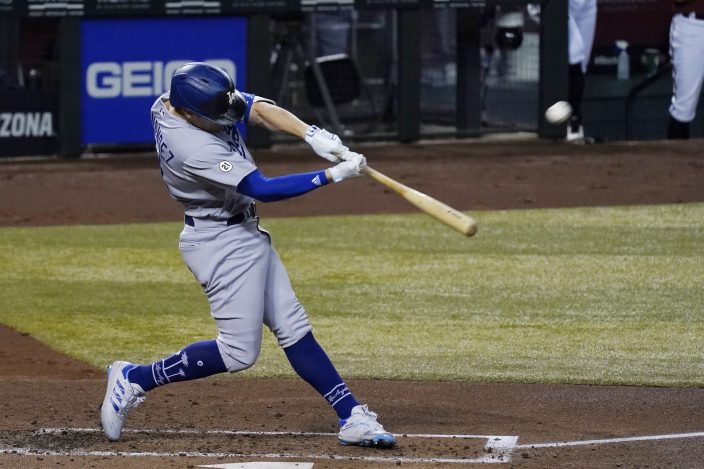 Los Angeles Dodgers' Enrique Hernandez connects for a home run against the Arizona Diamondbacks during the second inning of a baseball game Wednesday, Sept. 9, 2020, in Phoenix. (AP PhotoRoss D. Franklin)

Arizona starter Taylor Clarke had a rough outing his last start, allowing three runs in three innings against the Giants.

Betts greeted the right-hander with a leadoff home run and Hernandez hit another solo shot in the second. The Dodgers went up 4-3 with two runs in the fourth on a groundout and Hernandez's run-scoring single. 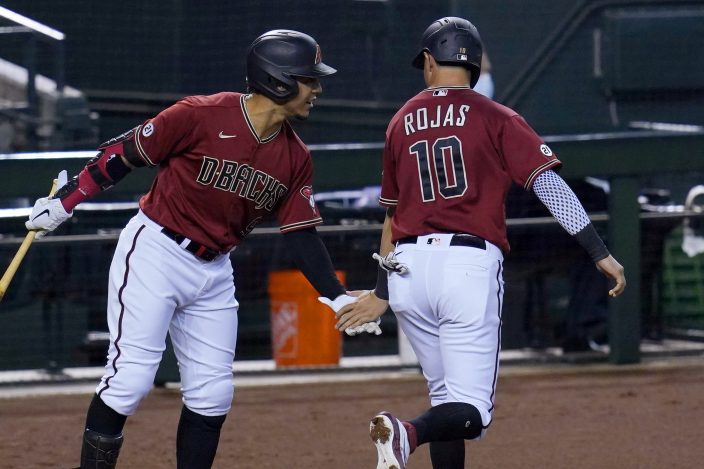 The Diamondbacks placed INF/OF Ketel Marte on the 10-day injured list with left wrist inflammation. He was hitting .290 with two homers and 14 RBIs in 40 games this season. 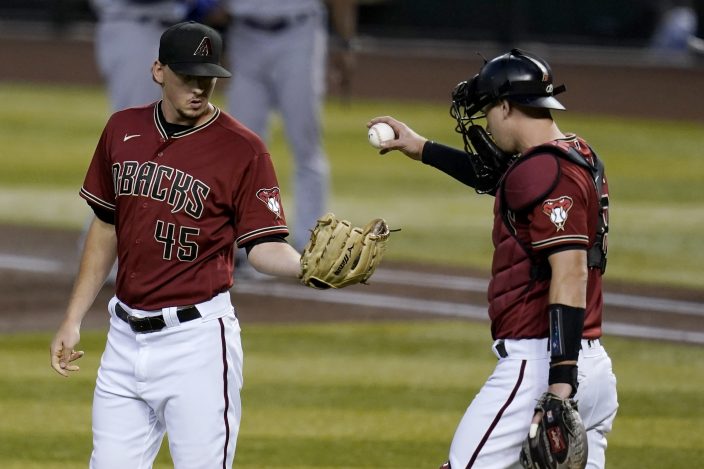 Arizona Diamondbacks starting pitcher Taylor Clarke (45) gets a visit to the mound by catcher Carson Kelly during the first inning of the team's baseball game against the Los Angeles Dodgers on Wednesday, Sept. 9, 2020, in Phoenix. (AP PhotoRoss D. Franklin)

Dodgers: 3B Justin Turner could return from the injured list this weekend, possibly as a designated hitter. He's been out since straining his left hamstring stealing a base on Aug. 29. ... RHP Pedro Baez (groin) also could return this weekend after throwing two innings to hitters.

Diamondbacks: RHP Merrill Kelly had thoracic outlet syndrome surgery to relieve pressure on the nerves around his right shoulder. He is out for the season.

Dodgers: RHP Dustin May (1-1, 2.88 ERA) will pitch against Arizona on Thursday after allowing two runs in 5 2/3 innings of a no-decision against Colorado his last start.

Diamondbacks: LHP Madison Bumgarner (0-4, 8.44) will make his second start since returning from the injured list with a mid-back strain Thursday against the Dodgers. He allowed two runs in four innings against the Giants his first start back.