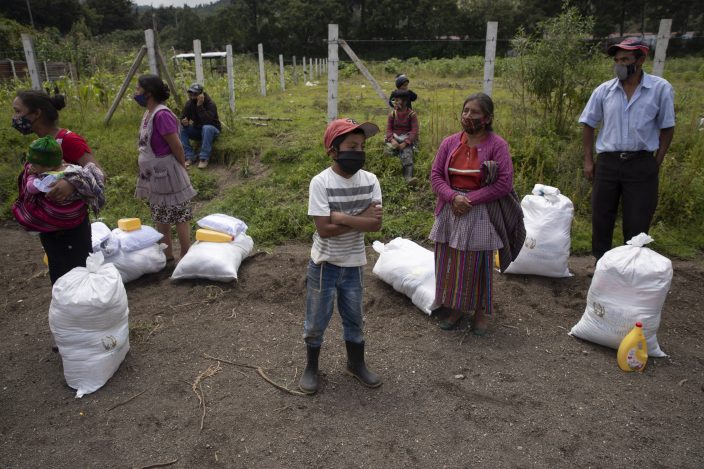 Relatives of deported people from the U.S. wearing face masks as a precaution against the spread of the new coronavirus, wait for their neighbors to collect aid after they received their bagfuls of aid, in San Jose Calderas, Guatemala, Wednesday, Sept. 9, 2020, amid the new coronavirus pandemic. The government's migrant support agency Conamigua, delivered bags of food and household items to the community of people who have been deported from the United States and affected by COVID-19. (AP PhotoMoises Castillo)

VIRUS OUTBREAK-MASK SHORTAGES — White House officials say the United States has all the medical supplies needed to battle COVID-19, but health care workers, hospital officials and even the FDA say that’s not the case. Shortfalls of medical N95 respirators and other protective gear started in March, and the American Medical Association’s president says the tremendous pressure on the supply chain continues today. By Martha Mendoza, Juliet Linderman, Thomas Peipert and Irena Hwang. SENT: 2,070 words, photos. An abridged version of 1,000 words is also available. 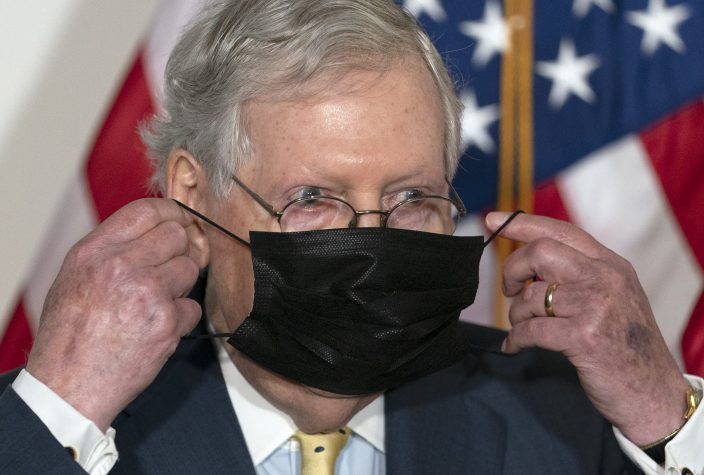 Senate Majority Leader Mitch McConnell of Ky., puts his face mask back on after speaking during a news conference of Senate Republican leadership, Wednesday, Sept. 9, 2020, on Capitol Hill in Washington. (AP PhotoJacquelyn Martin)

TRUMP-WOODWARD BOOK — President Donald Trump’s own words are redirecting attention to his handling of the pandemic when he can least afford it — less than two months before Election Day. “I wanted to always play it down,” Trump said of the threat from the virus in a March conversation with journalist Bob Woodward. By Zeke Miller. SENT: 830 words, photos, video. With TRUMP-WOODWARD BOOK-GLANCE — Trump’s thoughts on Kim Jong Un, racial unrest and a mysterious new weapon; TRUMP-WOODWARD BOOK-TIMELINE. 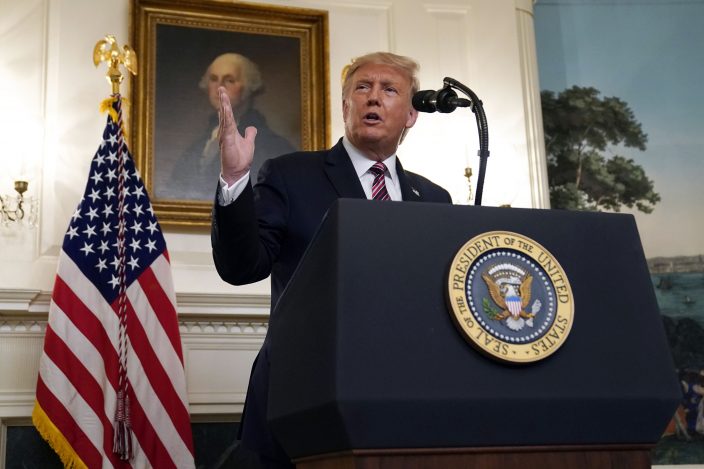 President Donald Trump speaks during an event on judicial appointments, in the Diplomatic Reception Room of the White House, Wednesday, Sept. 9, 2020, in Washington. (AP PhotoEvan Vucci)

CALIFORNIA-WILDFIRES — A Northern California wildfire threatened thousands of homes after winds whipped it into a monster that incinerated houses in a small mountain community and killed at least three people. Several other people have been critically burned and hundreds, if not thousands, of homes and other buildings are believed to have been damaged or destroyed by the North Complex fire northeast of San Francisco, authorities say. By Terence Chea and Brian Melley. SENT: 680 words, photos. With WILDFIRES-RAPID-SPREAD — California wildfires growing bigger, moving faster than ever.

HOMELAND SECURITY-WHISTLEBLOWER — An official at the Department of Homeland Security says he was pressured by agency leaders to make his intelligence reports reflect the priorities of the Trump administration. Brian Murphy says he was demoted for refusing to alter his reports on such matters as Russian interference in the election and the extent of the threat posed by white supremacists. By Ben Fox. SENT: 840 words, photos. 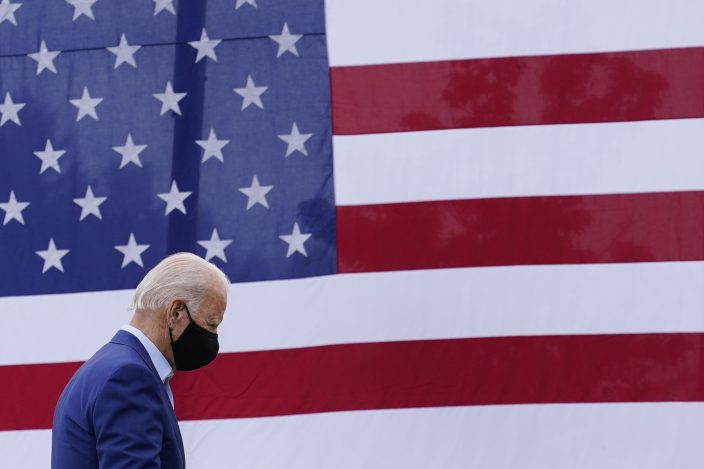 VIRUS-OUTBREAK-ISRAEL-POLITICAL-PANDEMIC — Israeli Prime Minister Benjamin Netanyahu has long cultivated a symbiotic relationship with the country’s ultra-Orthodox parties, doling out generous subsidies and leaving their insular way of life unperturbed in exchange for ironclad backing that has helped crown him Israel’s longest serving leader. Now, with the coronavirus pandemic raging and the Jewish High Holidays approaching, Netanyahu finds himself caught between his ultra-Orthodox partners and the need to drive down surging infection rates. By Tia Goldenberg. SENT: 1,010 words, photos.

Find more coverage on the Virus Outbreak on the featured topic page in AP Newsroom and below.

SEPT-11-ANNIVERSARY — In a year when the coronavirus pandemic has reshaped countless American rituals, even the commemoration of 9/11 could not escape unchanged. The 19th anniversary of the terror attacks will be marked by dueling ceremonies at the Sept. 11 memorial plaza and a corner near the World Trade Center, reflecting a divide over the memorial’s decision to suspend a cherished tradition of relatives reading victims’ names in person. By Jennifer Peltz. SENT: 1,000 words, photos.

VIRUS OUTBREAK-ASIA — India reported another record spike of 95,735 new coronavirus infections in the past 24 hours as the virus spreads beyond its major cities. SENT: 400 words, photos. With VIRUS-OUTBREAK-THE-LATEST.

VIRUS-OUTBREAK-ONE-GOOD-THING-NEPAL-HEALTH-WORKERS — At one of the largest hospitals in Nepal, a pharmacist and taxi driver have teamed up to feed COVID-19 patients, doctors, nurses and health workers. SENT: 500 words, photos.

VIRUS-OUTBREAK-VIRAL-QUESTIONS-EMPLOYERS — Employers are generally not required to tell workers when someone in the workplace has tested positive for the coronavirus. SENT: 280 words, graphic.

TRUMP-POLITICS AS UNUSUAL-ANALYSIS — When it comes to the Trump presidency, Americans are confronting questions they’re not used to asking. By Calvin Woodward. SENT: 900 words, photos.

ASEAN — U.S. Secretary of State Mike Pompeo asks Southeast Asian nations to go beyond words and act against China’s “bullying” in the disputed South China Sea, promising America will back them up. SENT: 460 words, photos.

GERMANY-BLACK-IN-BERLIN — A talent acquisition manager working in Berlin’s technology industry asked herself last year where all of the Black software engineers in Germany’s capital were. SENT: 610 words, photos.

CHIEFS-FANS-NATIVE-IMAGERY — Kansas City Chiefs fans who file into Arrowhead Stadium for a masked and socially distanced start to the NFL season won’t be wearing headdresses or face paint amid a nationwide push for racial justice following the police-custody death of George Floyd in Minneapolis. SENT: 720 words, photos.