The Oakland Athletics have long been a stellar second-half team. In a shortened season, they have dominated since Day 1.

“Big series,” Oakland's Mark Canha said. “We came in here with the right mindset. It was very businesslike and we made it happen. Well-played series.” 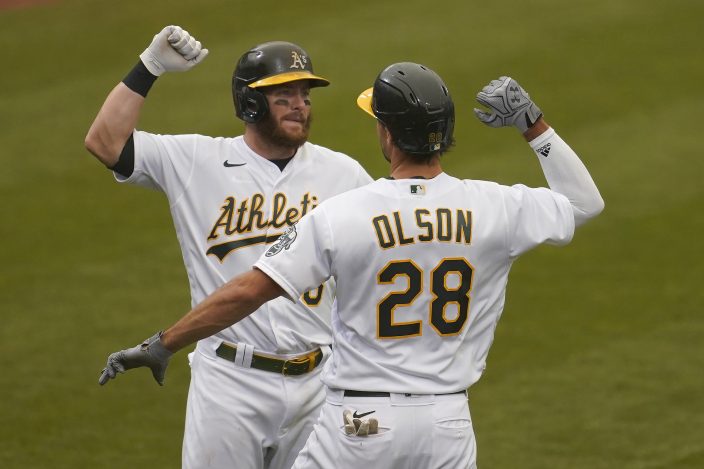 Oakland Athletics' Matt Olson (28) is congratulated by Robbie Grossman, left, after hitting a two-run home run that scored Ramon Laureano against the Houston Astros during the sixth inning of a baseball game in Oakland, Calif., Thursday, Sept. 10, 2020. (AP PhotoJeff Chiu)

The division-leading A's (27-15) moved 6 1/2 games ahead of second-place Houston in the AL West. The teams split Tuesday's doubleheader that was forced by an Aug. 30 postponement at Houston because of Oakland pitcher Daniel Mengden's positive coronavirus test result.

Oakland had four games postponed and is 5-3 since resuming play last Friday against the Padres. Houston (22-23), which won a majors-best 107 games last season and the past three AL West titles, lost for the eighth time in nine games.

“It's not easy. We're all frustrated," Astros manager Dusty Baker said. “But these guys they never get down. They get down momentarily but then they bounce right back.” 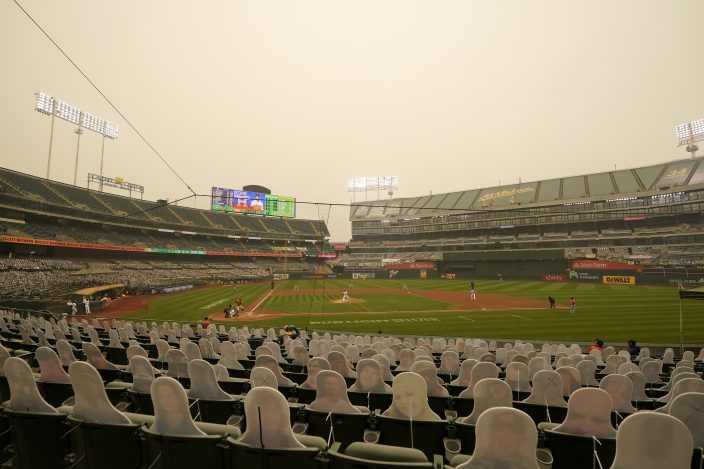 Smoke and haze from wildfires hovers over Oakland Coliseum during the fourth inning of a baseball game between the Oakland Athletics and the Houston Astros in Oakland, Calif., Thursday, Sept. 10, 2020. (AP PhotoJeff Chiu)

Manaea (4-2) struck out four and didn't walk a batter over seven innings. The lefty has surged since going 0-2 over his initial five outings. He didn't allow a runner until Josh Reddick doubled leading off the sixth.

“How many rockets did we hit off of him? We hit some balls extremely hard off of him they just didn’t find any holes,” Baker said. “We actually hit the ball harder than they did. It didn’t work.” 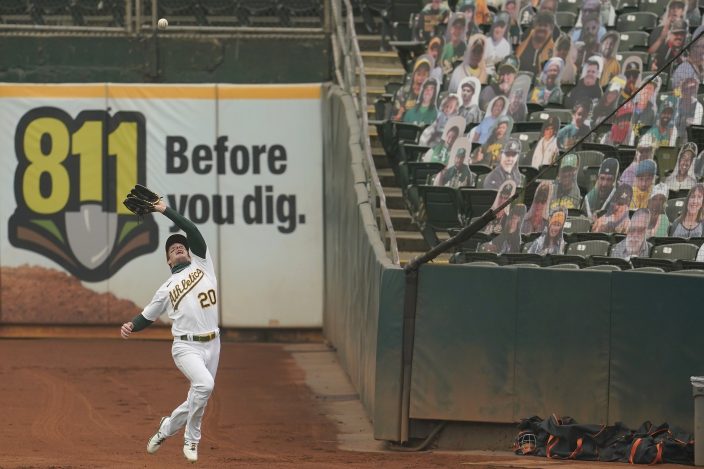 Chad Pinder provided insurance with an RBI single in the seventh as Oakland took four of five in the series. Liam Hendriks finished the 2-hour, 18-minute game for his 12th save.

Martín Maldonado grounded into a double play that scored Houston's lone run off Manaea in the sixth. Olson connected in the bottom half on another smoky, sunless day that had the strange sight of ballpark lights on in the afternoon. Ash fell on the field for a third straight game.

Astros right-hander José Urquidy (0-1) didn't allow a runner until Marcus Semien's one-out walk in the fourth and didn't give up at hit until Canha's single in the fifth. "Everything was going the other guys' way. Today was disheartening because we hit a lot of balls hard off Manaea," Houston's Josh Reddick said. “It's been very heartbreaking but we have to keep moving forward.” 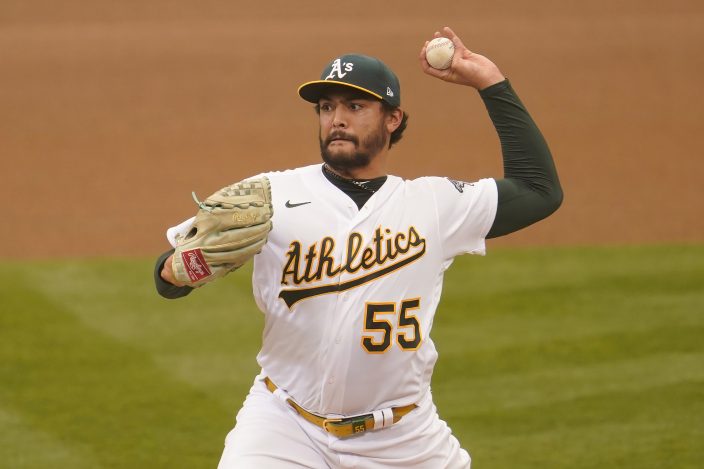 This marked the 15th five-game series in Oakland history. The A's have never swept one but won four of the games in a five-game set for the fourth time and first since July 5-8, 1984, at Milwaukee. 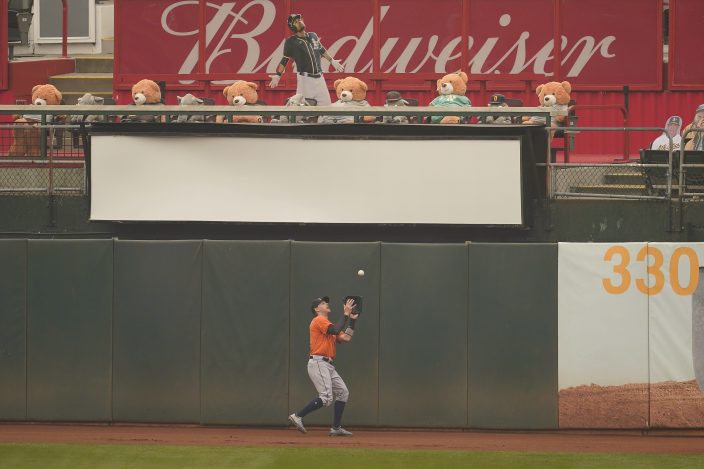 Astros: RHP Justin Verlander (strained forearm) threw a bullpen Wednesday in Houston. Baker was waiting to hear more details about the session and remains optimistic Verlander will return before season's end. The Astros have mapped out the pitcher's rehab schedule for the rest of September. “He's supposed to be on the mound if everything goes well, no setbacks here, again pretty soon,” Baker said. “Hopefully if everything goes well he could be back at the end of the month.”

Athletics: 3B Matt Chapman still wasn't ready to resume baseball activity as he had hoped. He is nursing right hip tendinitis that forced him out of Sunday’s series finale against San Diego. ... LHP A.J. Puk, who hasn't pitched this year and is on the injured list with an inflamed pitching shoulder that required injections, will be re-examined in the coming days by Dr. Neal ElAttrache in Los Angeles. 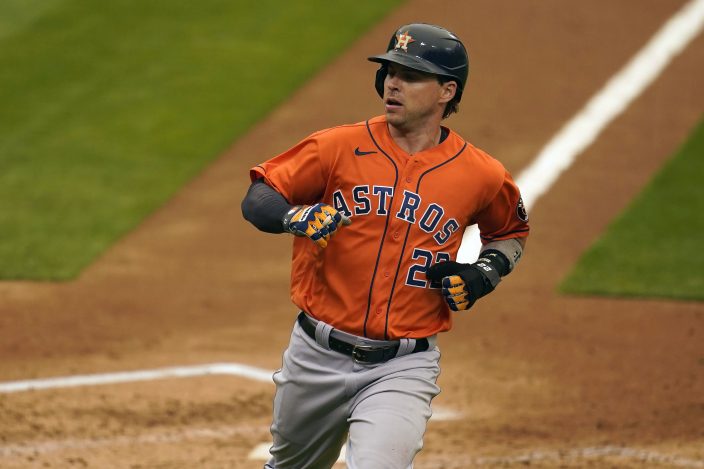 Oakland RHP Mike Fiers (4-2, 4.93 ERA) pitches Friday at Texas. He has gone 3-1 with a 3.22 ERA over his last four starts and the A’s are 6-2 in his outings. Oakland heads on the road with doubleheaders Saturday at Texas and Monday at Seattle.

Following an off day Friday, LHP Framber Valdéz (3-3, 3.61) pitches for the Astros on Saturday in a two-game interleague stop at Dodger Stadium. 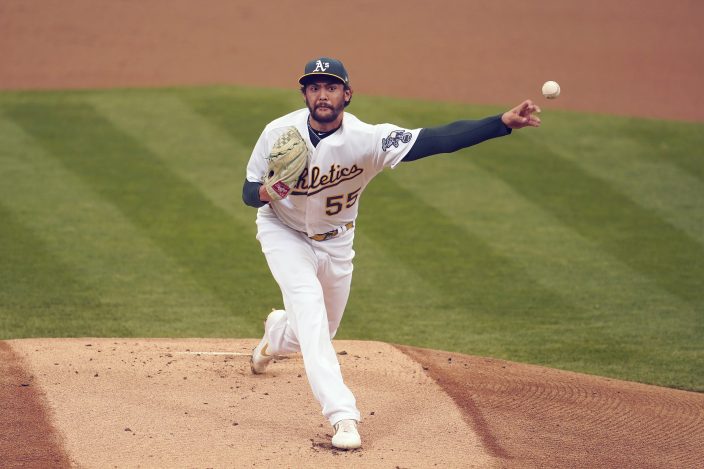