Smoke billowed from the port in Lebanon's capital Friday hours after firefighters said they were able to bring under control a huge fire that terrified the city’s residents five weeks after a massive blast killed and wounded thousands of people.

The fire led authorities to order the removal of all dangerous materials from the country's ports and airport to avoid more such incidents that have traumatized the nation of 5 million. Military police have already opened an investigation into the fire.

It wasn't clear what caused the fire that broke out Thursday afternoon and covered the city with dark smoke and toxic fumes. No one was hurt by the fire, the second at the port this week. 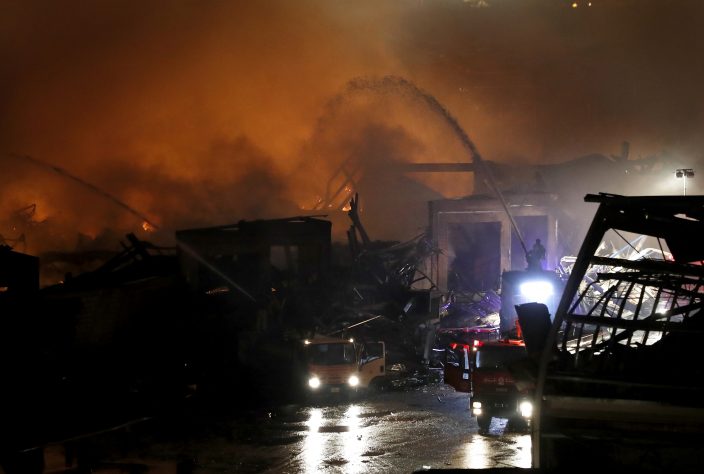 Firefighters extinguish a fire in warehouses at the seaport of Beirut, Lebanon, Thursday, Sept. 10. 2020. A huge fire broke out Thursday at the Port of Beirut, triggering panic among residents traumatized by last month's massive explosion that killed and injured thousands of people. (AP PhotoHussein Malla)

The head of Lebanon's Civil Defense said Friday the fire was extinguished and firefighters are working to cool down the area of the fire.

Many Beirut residents opened their apartments windows and hid in corridors fearing a repeat of the Aug. 4, blast that killed 192, wounded 6,500, left a quarter million people homeless and caused damage worth billions of dollars. The explosion of nearly 3,000 tons of ammonium nitrate stored at the port for six years forced the government to resign six days alter.

The port explosion is still under investigation and negligence and mismanagement appear to be a main reason. Corruption is widespread in Lebanon, where the ruling class made up of sectarian groups has been running the country with impunity since the end of the 15-year civil war in 1990.

“The fire at the port of Beirut cannot be justified no matter what. Accountability is a main condition that such painful incidents are not repeated,” Prime Minister-designate Mustapha Adib wrote in a tweet Friday. Adib, a Lebanese-French citizen, won majority support from legislators last week for form a new Cabinet.

Following a meeting Thursday night by the Higher Defense Council, the country’s top security body, a statement said they discussed the presence of dangerous material at the country’s ports and only international airport in order to destroy them or get rid of them “to avoid any catastrophic incidents.”

In a sign of widening distrust after the explosion, many Lebanese accused politicians of deliberately trying to destroy evidence at the port that led to the blast. Thursday’s fire was the second mysterious blaze there this week, following a small one Tuesday that also caused some panic but was quickly extinguished.

The panic was compounded by the fear that more chemicals could be in the port's wreckage. Earlier this month, the army said it found more than 4 tons of ammonium nitrate in four containers stored near the port that it said were “dealt with.”

Outgoing Minister of Public Works and Transpiration Michel Najjar, whose ministry is in charge of the port, told a local TV station that the fire appears to have been caused by sparks from a power tool during work at the port.

Lebanon is gripped by an unprecedented economic crisis and financial collapse, blamed on decades of mismanagement and corruption by an entrenched political class. Last month's blast is seen as the culmination of leaders unable to manage the country’s affairs or protect its people. So far, authorities have been unable to provide answers about the explosion, and there has been no accountability for it.

Qatar apologized Wednesday after a ...