Berlin's Justice Ministry has approved a request from Moscow for legal assistance in the investigation of the poisoning of opposition leader Alexei Navalny, and has tasked state prosecutors with working with Russian authorities, officials said Friday.

Berlin state prosecutors said in a tweet that their office had been commissioned to provide legal assistance to Russia and information on Navalny's state of health, “subject to his consent.”

The office said it would provide no further information on the request at this time. 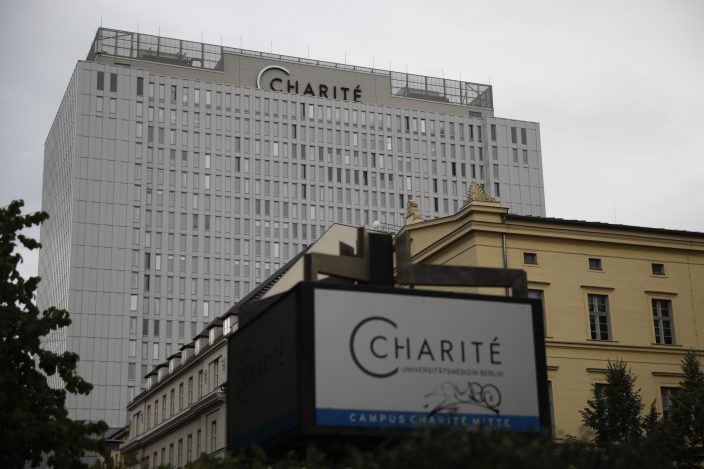 FILE-In this Wednesday Sept. 2, 2020 file photo an exterior view shows the central building of the Charite hospital where the Russian opposition leader Alexei Navalny is being treated, in Berlin, Germany. Berlin’s Justice Ministry has approved a request from Moscow for legal assistance in the investigation of the poisoning of opposition leader Alexei Navalny, and has tasked state prosecutors with working with Russian authorities. (AP PhotoMarkus Schreiber, file)

Navalny, the most visible opponent of Russian President Vladimir Putin, was flown to Germany two days after falling ill on Aug. 20 on a domestic flight in Russia. German chemical weapons experts have determined that the 44-year-old was poisoned with a Soviet-era nerve agent, prompting Berlin to demand that Russia investigate the case.

He was kept in an induced coma for more than a week as he was treated with an antidote, before hospital officials said Monday his condition had improved enough for him to be brought out of it.

The hospital had no comment Friday on his condition, but doctors have not ruled out long-term effects of the poisoning.

The Kremlin has bristled at calls from Chancellor Angela Merkel and other world leaders for Russia has to answer questions in the case, denying any official involvement and accusing the West of trying to smear Moscow.

Russian authorities have prodded Germany to share the evidence that led them to conclude “without doubt” that Navalny was poisoned with a military nerve agent from the Novichok group, the same class of Soviet-era agent that British authorities said was used on former Russian spy Sergei Skripal and his daughter in Salisbury, England, in 2018.

Germany’s Defense Ministry has said the data about Navalny has already been provided to the Hague-based Organization for the Prohibition of Chemical Weapons, of which Russia is a member.

Merkel's spokesman, Steffen Seibert, said Friday the agency was best equipped to handle an issue that was “not a bilateral German-Russian problem."

“This is about a crime that took place in Russia with a chemical nerve agent that is internationally prohibited — the OPCW is the logical point of contact,” he told reporters.

On Wednesday, the Russian Foreign Ministry invited German Ambassador Geza Andreas von Geyr to reaffirm Moscow’s demand for Germany to provide Russian authorities with the medical data, including biological materials, the results of samples and tests to allow Russian experts to study and check them. Russian doctors previously said they had found no sign of Navalny’s poisoning.

The move to task Berlin prosecutors to work with Russian investigators came a week after Russia's request for assistance was received by the Berlin state Justice Ministry.

Separately, Seibert denied reports that Germany had received a Russian request for permission to send investigators to interview Navalny.