The indelible moment of rage affected Myles Garrett and shaped how others see him.

But Garrett isn't going to let the incident define him, and as he prepares for his fourth season, he's not worried about any outside perceptions of him as a person or player. 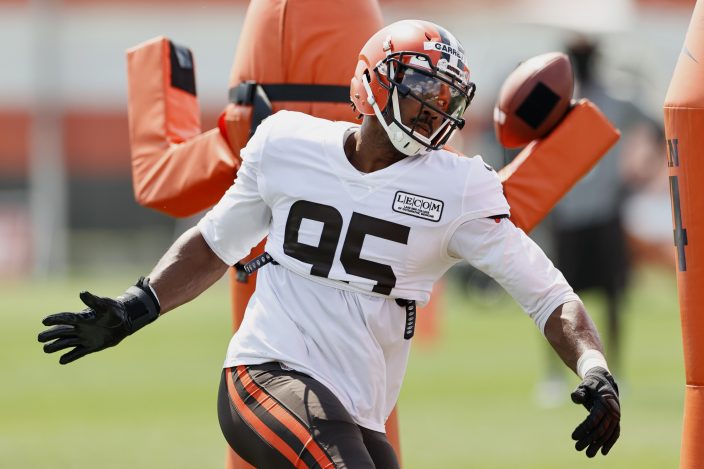 “Either they'll see eventually or they'll keep on hating," he said of detractors. "That's just part of life. When you're successful, you're going to have people who drag you or hate on you.

"But they will recognize you for your game or what you do outside of it, or they just don't matter.”

Garrett returns Sunday for his first game since that violent, fateful encounter on national TV with Rudolph. The Browns, led by rookie coach Kevin Stefanski, open their season at Baltimore against defending league MVP Lamar Jackson and the Ravens. 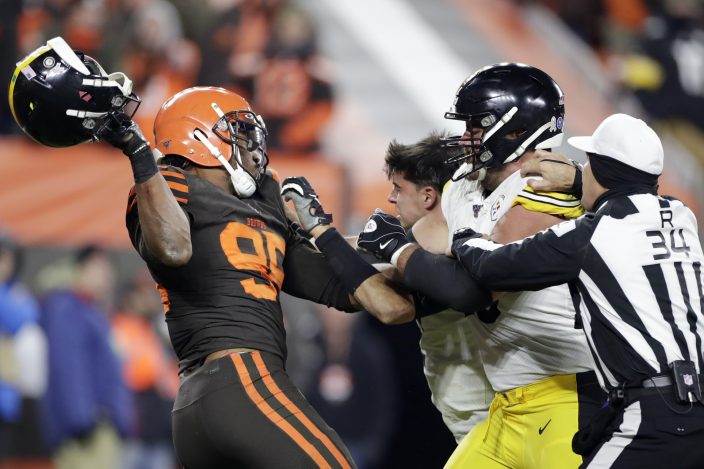 FILE - In this Nov. 14, 2019, file photo, Cleveland Browns defensive end Myles Garrett, left, gets ready to hit Pittsburgh Steelers quarterback Mason Rudolph, second from left, with a helmet during the second half of an NFL football game in Cleveland. The Browns star defensive end can't undo his helmet-swinging attack on Rudolph last season or the six-game NFL suspension that ensued. That damage is done and irreparable. But he isn't going to let the incident define him, and as he prepares for his fourth season, he's not worried about any outside perceptions of him as a person or player. (AP PhotoRon Schwane, File)

It's been nine months since an enraged Garrett ripped off Rudolph's helmet and smashed him over the head with it in the closing seconds of Cleveland's 21-7 win on Nov. 14 over the archrivals. Garrett has claimed Rudolph used a racial slur to provoke him, a charge the QB has strongly denied.

In the aftermath of his actions, Garrett was banned indefinitely and the Browns' defense struggled mightily without him. Cleveland lost four of its last six, finished 6-10, coach Freddie Kitchens was fired and general manager John Dorsey left.

Through his behavior, Garrett let the Browns down, and the incident with Rudolph scarred the No. 1 overall draft pick in 2017 to the point that he questioned his desire to keep playing. Earlier this week, he told cleveland.com that he pondered quitting.

On Friday, Garrett was evasive when asked why the incident made him consider retirement.

The vague answer in some ways epitomizes Garrett, who can be mysterious, aloof, gregarious and charming in the same conversation. There's no denying his talent, and the Browns have no qualms about his character despite the incident with Rudolph, which is why they signed him to a five-year, $125 million contract extension this summer.

Garrett is expected to be a cornerstone, a difference maker, one of the game's top players.

Stefanski has only known him for a few months, but feels a strong connection to the 24-year-old Garrett, who writes poetry and is a member of the Browns' social justice committee. During protests this summer, Garrett donated money to the families of retired St. Louis police captain David Dorn and Louisville chef David McAtee, who were shot and killed.

Garrett has been up front about personal goals: league's best defensive player, a Hall of Fame career. And he wants desperately to get the Browns back to the playoffs after a 17-year drought.

“This is a brand new season for me,” he said. "A blessing to be out there. I feel like every guy feels like that, especially with COVID and what is going on in the world, not knowing if there would be a season in general. And then we are all just excited to be out there and play the game that we love.”

The 6-foot-4, 270-pounder is more determined than ever, and teammate Sheldon Richardson isn't shy about what he thinks he'll see from Garrett in 2020.

“Pure dominance," the defensive tackle said. "He felt some type of way about him not making the Pro Bowl last year. I think the boy is more explosive and even a little bit stronger, so that is even more dangerous coming off the edge.

NOTES: Stefanski ended mystery about play calling by saying he'll handle the offense on Sunday. “With any decision, we spend a lot of time thinking about what is best for the team,” he said. "That is where we landed.” ... Starting CB Greedy Williams (shoulder) will not play Sunday and C JC Tretter (knee) is questionable after returning to practice this week.