Cleanup hitter Matt Olson connected for a grand slam off Luís Garcia after the Texas opener walked the bases loaded to start the game, and the Oakland Athletics beat the Rangers 10-6 on Friday night.

Mike Fiers (5-2) won for the third time in three starts against the Rangers with six solid innings as the AL West-leading A’s moved a season-high 13 games over .500 and reduced their magic number for reaching the playoffs to single digits.

Oakland improved to 6-1 against the last-place Rangers, clinching the season series for the fourth consecutive year. 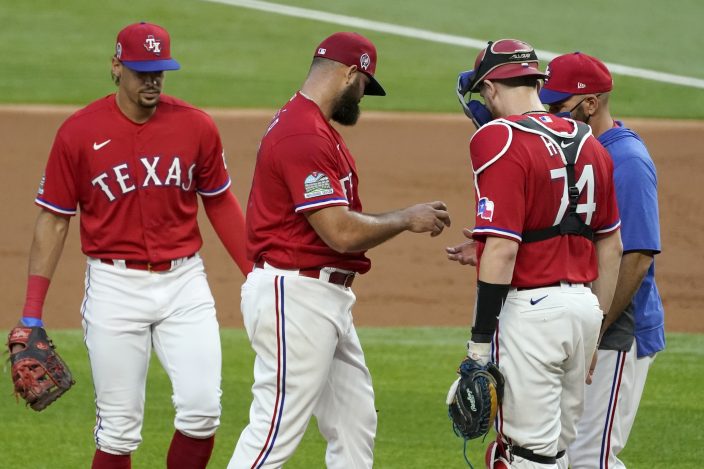 Texas Rangers' Ronald Guzman, left, and Sam Huff (74) watch as Luis Garcia, second from left, turns the ball over to manager Chris Woodward after giving up a grand slam to the Oakland Athletics during the first inning of a baseball game in Arlington, Texas, Friday, Sept. 11, 2020. (AP PhotoTony Gutierrez)

Olson's 426-foot drive about 15 rows up in right field on a 3-2 pitch was his 13th homer and second grand slam this season. The other was a game-ender against the Los Angeles Angels on opening day. Olson added an RBI single in the second inning.

Garcia (0-2) didn't get an out in what was supposed to be the second tandem start for the right-hander with Jordan Lyles. Instead, reliever Jimmy Herget came in after Olson's slam as Garcia's ERA rose from 3.68 to 8.59.

Lyles started the second inning as planned, and Sean Murphy sent his second pitch into the pavilion above the hitting background in center. Murphy's fifth homer of the season traveled 464 feet. Robbie Grossman hit his fifth homer in the sixth. 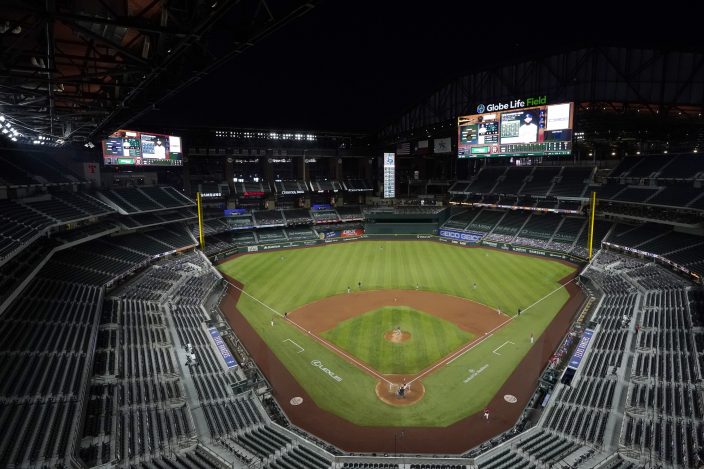 Texas Rangers' Rougned Odor stands at the plate while waiting on a pitch from Oakland Athletics' Mike Fiers in the second inning of a baseball game in Arlington, Texas, Friday, Sept. 11, 2020. (AP PhotoTony Gutierrez)

Fiers gave up one run through six innings before Elvis Andrus homered leading off the seventh and Rougned Odor and Ronald Guzman walked, ending the right-hander's night. Fiers ended up allowing four runs with five strikeouts.

Sam Huff made his major league debut and matched Sandy Alomar (2005) and Mark Parent (1991) as the tallest catchers in Rangers history at 6-foot-5. The prized prospect struck out on three pitches in his first at-bat and finished 0 for 3 with a walk. Odor hit a two-run homer in the eighth. 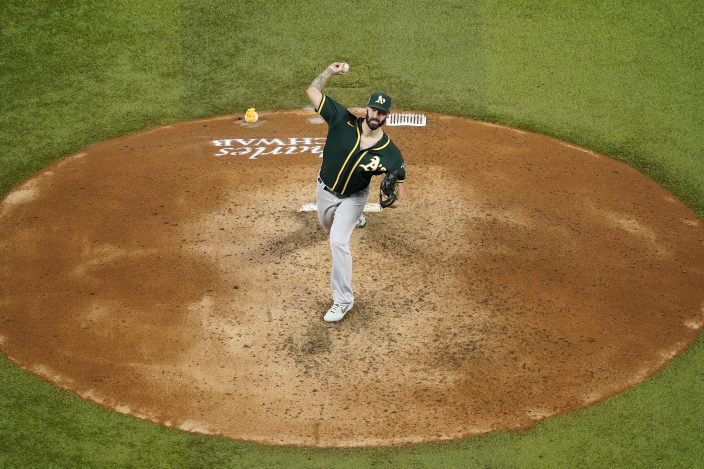 Lyles recovered from a rough second to go seven innings, the longest relief outing in the majors this season. The right-hander allowed nine hits and five runs while throwing 115 pitches, the most for a big league reliever since Jason Johnson threw the same number for Baltimore against the Chicago White Sox in 2000, according to Baseball Reference. It was the longest relief outing for the Rangers in 12 years.

The Rangers opened the roof on their new $1.2 billion stadium for the second time — the first time because of pleasant weather. The first-pitch temperature was 76 degrees. It was 95 degrees when Texas experimented with an open roof in August.

Athletics: LHP A.J. Puk will have season-ending surgery on his pitching shoulder. He hasn't pitched this season because of inflammation that required injections. ... 3B Matt Chapman visited a doctor in Vail, Colorado, on Friday for another opinion on his right hip tendinitis. He hasn't played since Sunday.

Rangers: Manager Chris Woodward said C Jose Trevino's sprained left wrist was improving faster than expected and he could return Sunday or Monday. He injured the wrist on a swinging strike Wednesday.

Oakland RHP Daulton Jefferies is expected to make his major league debut in the first game of a doubleheader scheduled after the A's decided not to play the final game of a four-game series at the Rangers on Aug. 27 to support calls for racial justice. RHP Chris Bassitt (3-2, 3.12 ERA) is set for the second game for the A's.

Rookie reliever Wes Benjamin is scheduled to be another opener for the Rangers, with fellow lefty Kolby Allard (0-5, 7.22) expected to make the other start. It's the first doubleheader of the pandemic-shortened season for the Rangers and the second this week for Oakland.