Rougned Odor and Ronald Guzman homered in a five-run first inning for the Texas Rangers, who beat the Oakland Athletics 5-2 in the first game of a doubleheader Saturday to spoil the major league debut of Daulton Jefferies.

Rangers rookie left-hander Wes Benjamin (1-0) worked four innings for his first big league victory, coming in his fifth game. He struck out four and walked one while allowing two runs after Nick Goody retired the first three batters as an opener.

Rafael Montero worked a perfect seventh for his eight save in as many tries this season, though it was the right-handed closer's first since Sept. 1. The Rangers had won only 10 of their previous 13 games.

Jefferies (0-1), a 25-year-old right-hander who had never pitched above the Double-A level, was called up to be the 29th player for the A’s in the doubleheader. He threw 53 pitches over two innings, allowing the five runs on five hits, with one strikeout and two walks.

Both Rangers homers came with two outs in the first, with Odor lining a three-run shot down the right field line just a few rows beyond the wall. Elvis Andrus then had a single before Guzman's impressive 431-foot blast much deeper into the right felt seats. 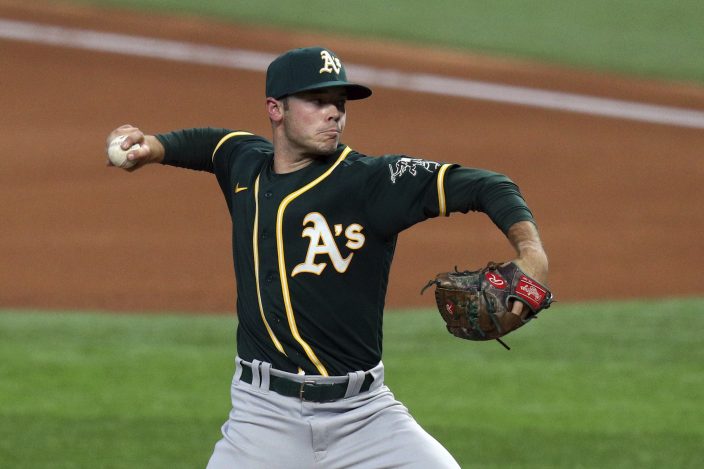 Odor went deep for the second game in a row, and the fifth time this season, though the homer in the first was only his third hit his last 30 at-bats.

It was the first time the Rangers homered in the first inning of a game at their new ballpark with a retractable roof — which was closed Saturday, a day after being opened during Oakland's 10-6 win in the series opener. The five runs matched their most in an inning this season, and the most allowed by the A's in a single frame.

The teams played a doubleheader to make up for the game postponed Aug. 27 when the A's decided not to play the finale of a scheduled four-game series to support calls for racial justice. 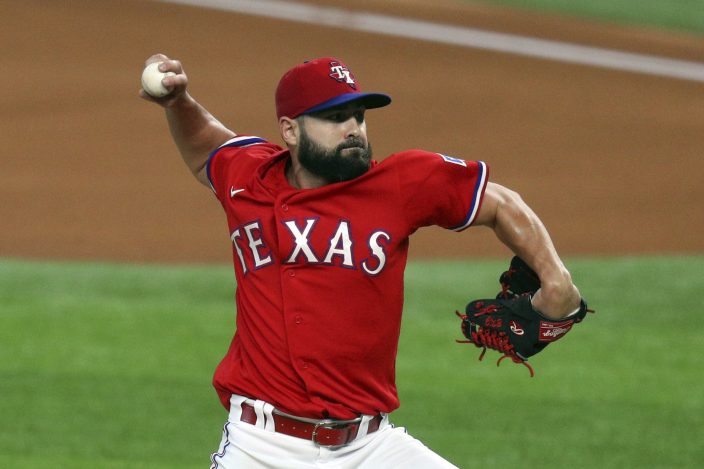 Athletics: All-Star 3B Matt Chapman is expected to miss the rest of the season because of a strained right hip. After not playing since last Sunday, the two-time Gold Glove winner was put on the injured list Saturday and is scheduled to undergo surgery Monday.

Rangers: OF Willie Calhoun, out since Aug. 19 because of a left hamstring strain, likely will be activated from the injured list Tuesday, when the Rangers play at Houston after a day off Monday. 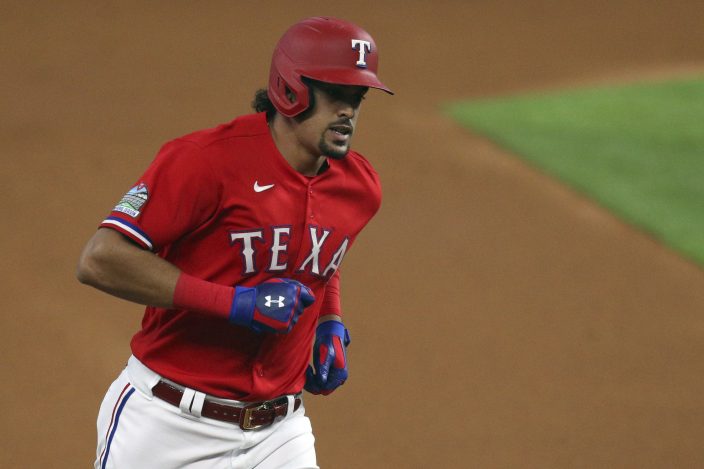 Texas Rangers Ronald Guzman (11) rounds third base after a two-run home run against the Oakland Athletics in the first inning in a baseball game Saturday, Sept. 12, 2020 in Arlington, Texas. (AP PhotoRichard W. Rodriguez)

For the A's, the nightcap of their second doubleheader in five days, with another doubleheader scheduled Monday in Seattle. The Rangers will play twice in one day for the first time this season.