Lynn (6-2) retired 17 straight after the first two batters reached. He walked Marcus Semien with two outs in the sixth, then struck out Stephen Piscotty.

He allowed consecutive one-out singles in the seventh to Robbie Grossman and Mark Canha, Oakland's first hits since Semien's double in the first, then struck out Ramón Laureano and was helped when third baseman Isiah Kiner-Falefa made a diving catch on Jonah Heim's liner. 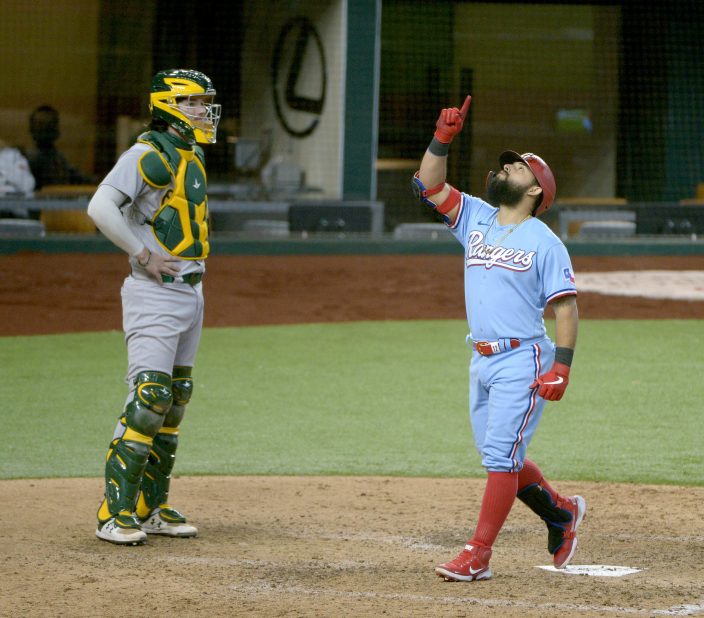 Odor homered for the third straight day covering four games, connecting off Frankie Montas for a 4-1 lead in the sixth. His sixth homer was just his fourth hit in his past 36 at-bats, but three of those hits were homers.

Texas hit three home runs in its new retractable roof stadium for the first time and had seven in the series. Derek Dietrich hit a solo shot in the second, and Jeff Mathis hit a two-run homer in the seventh.

Montas (3-4) allowed at least four runs for the fourth time in five starts since dropping his ERA to 1.57 with seven scoreless innings in a 3-1 win over Houston on Aug. 8. He struck out seven in 5 1/3 innings. 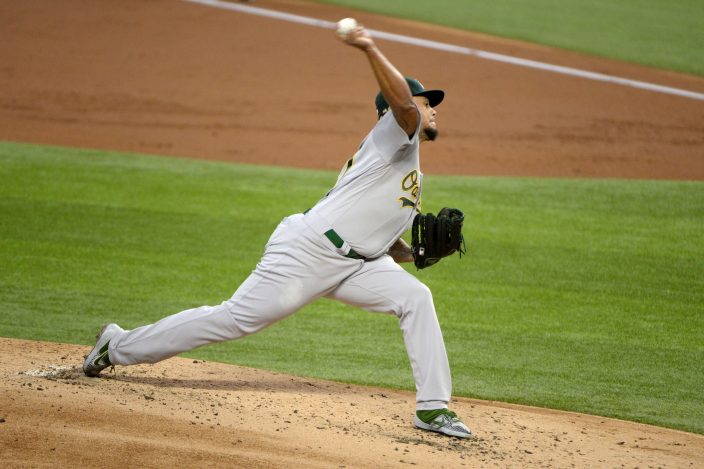 Tommy La Stella hit a solo homer for Oakland in the eighth.

Oakland is headed to Seattle for a Monday doubleheader that will be part of a three-day stretch of four games in three cities and three time zones. The A's start a two-game series at Colorado on Tuesday. The doubleheader, wedged between the Texas and Colorado stops after a three-game series at the Mariners to start September was postponed over COVID-19 issues, will be Oakland’s third in seven days. The 10 games over seven days would be the franchise's most since the Kansas City A’s played 10 from June 16-22, 1966. 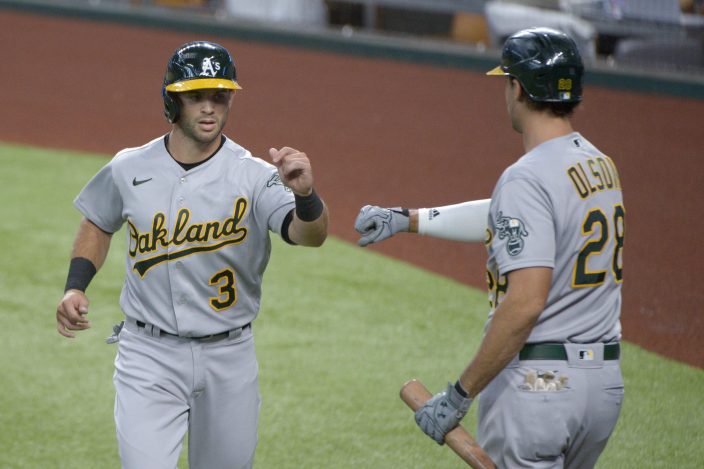 Oakland Athletics' Tommy La Stella (3) is greeted by Matt Olson (28) after scoring a run in the first inning of a baseball game against the Texas Rangers in Arlington, Tex, Sunday, Sept. 13, 2020. (AP PhotoMatt Strasen)

Montas and Lynn struck out the side in the fifth inning. Lynn’s middle K of Matt Olson was the 1,400th strikeout of his nine-year career. Olson struck out four times.

Athletics: Utility man Chad Pinder, among those expected to fill in with 3B Matt Chapman out for the season with a hip injury, went on the 10-day I with a strained right hamstring. INF Nate Orf's contract was selected from the alternate site.

Rangers: SS Elvis Andrus won't play again this season because of a lower back strain. The 32-year-old will treat the injury with injections and isn't expected to have surgery. Andrus, the starter since 2009 but whose production has been declining, has two years left on his contract. ... Manager Chris Woodward said he gave RF Joey Gallo the day off because of a tight hamstring, but said he planned to play the slugger the rest of the season after the final scheduled off day Monday. ... C Jose Trevino went on the IL with a left wrist injury. OF Scott Heineman was recalled from the alternate site.

Athletics: LHPs Jesús Luzardo (2-2, 3.97 ERA) and Mike Minor (0-5, 6.35) are the probable starters for the doubleheader in Seattle. Minor has allowed six runs in 4 1/3 innings in two appearances, including one start, since coming over from the Rangers in a trade.

Rangers: The final trip, the longest at nine games, starts Tuesday in Houston. Rookie RHP Kyle Cody (0-1, 0.93) is the probable starter for the opener against the Astros.