The South China Sea remained a point of contention at talks last week between China and the Philippines, with Manila issuing tough words before withdrawing them without explanation. 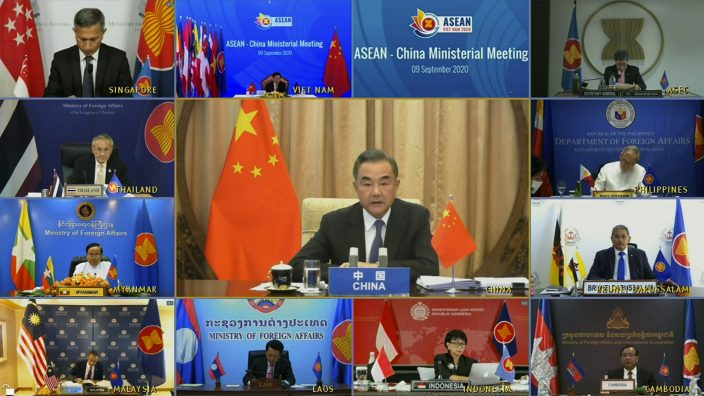 In this image taken from video provided by VTV, Chinese Foreign Minister Wang Yi speaks during an online meeting with ASEAN foreign ministers on Wednesday, Sept. 9, 2020. Southeast Asia’s top diplomats held their annual talks by video Wednesday to discuss the immense crisis wrought by the coronavirus pandemic and rising tensions in the South China Sea amid the escalating rivalry between Washington and Beijing. (VTV via AP)

The Philippine defense chief said his country would adhere “without any possibility of compromise” to a 2016 international arbitration ruling that invalidated most of China's sweeping claims in the South China Sea.

Defense Secretary Delfin Lorenzana made the remark to his Chinese counterpart on Friday, according to a Philippine statement about the meeting. However, the statement was withdrawn soon afterward, and the contentious comment was removed.

The incident underscores the South China Sea’s central role as a point of contention. China maintains overwhelming economic and military advantages over the Philippines.

China refused to participate in the arbitration by a U.N.-backed tribunal. It dismissed its ruling as a “sham” and continues to defy it. Chinese Gen. Wei Fenghe's visit followed a series of protests by the Philippines over China’s increasingly aggressive actions in the busy waterway.

Taiwan says Chinese warplanes entered its airspace in the South China Sea on Wednesday and Thursday during large-scale war games that it called a “serious provocation to the self-governing island and a grave threat to regional peace and stability.”

Taiwan’s foreign ministry said Thursday that its military was fully aware of China's actions and “responds effectively,” without giving details. The war games reportedly took place in airspace between Taiwan’s main island and the Taiwan-controlled Pratas island group to the south.

China says the self-governing democracy of 23 million people is its own territory and has been stepping up its threat to bring the island under its control by military force with frequent war games and aerial patrols.

Taiwan said such actions by China’s People’s Liberation Army threaten the entire region and urged the international community to respond.

“Today, the PLA has chosen to conduct exercises near Taiwan; tomorrow it may engage in similar threats near other countries,” the ministry said in a statement.

Some commentators on the island called the exercises the most serious military threat toward Taiwan since 1996, when China staged war games and lobbed missiles into waters near the island in hopes of intimidating voters in Taiwan's first direct presidential election.

China cut contacts with Taiwan’s government following the 2016 election of independence-minded President Tsai Ing-wen, who was reelected this year, and has sought to isolate her diplomatically while ratcheting up political, military and economic pressure.

Chinese Foreign Minister Wang Yi has fired back at U.S. accusations over China’s actions in the South China Sea, saying it was in fact Washington that was the “biggest driver of militarization” and “most dangerous factor damaging peace” in the region.

Addressing a meeting of East Asian foreign ministers via video link on Wednesday, Wang accused the U.S. of stirring up frictions between China and countries bordering on the South China Sea, and of undercutting attempts by China to negotiate disputes with the 10-member Association of Southeast Asian Nations.

Wang said the U.S. had sent nearly 3,000 sorties of military aircraft and more than 60 warships through the strategically vital waterway in the first half of the year.

While reaching out to regional governments and espousing Beijing’s desire for peace and stability, Wang also laid down the line on China’s claim to virtually the entire South China Sea, saying its sovereignty claims have a “sufficient historical and legal basis.”

Under leader Xi Jinping’s aggressive foreign policy and sharp competition for fish stocks, oil and other resources, China has had limited success in convincing regional states that it, not the U.S., is the more reliable partner to maintain peace and stability in the region.