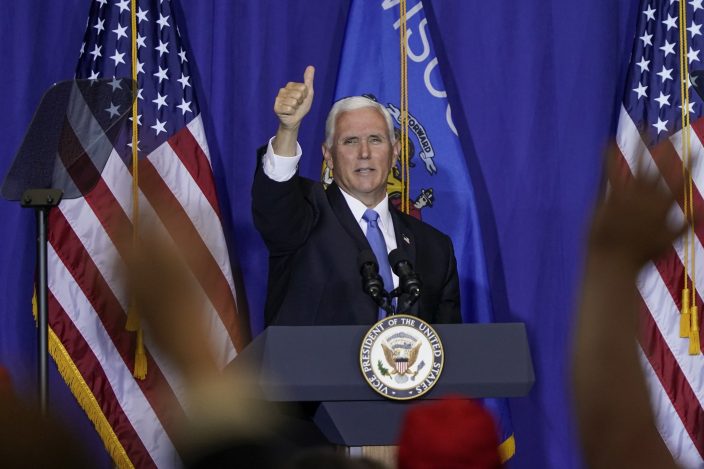 ELECTION 2020-FLORIDA — Florida is the nation’s leading presidential battleground, and there’s mounting anxiety among Democrats that Joe Biden’s standing among Latinos in the state is slipping. By Steve Peoples and Will Weissert. SENT: 1358 words, photos. 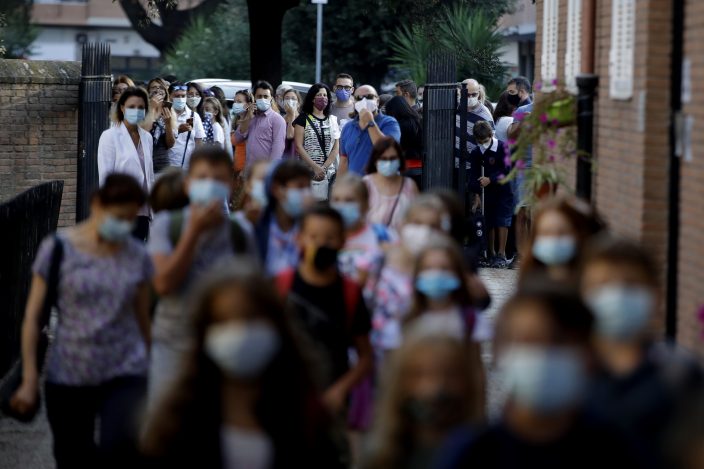 Relatives and parents look at students entering the San Policarpo parish as Italian schools reopened, in Rome, Monday, Sept. 14, 2020. Primary school "Acquedotti" reopened Monday, with four of its classes moved to a parish to increase spaces and guarantee social distancing between pupils. Italian schools closed nationwide on March 5 and never reopened as Italy became the epicenter of the pandemic in Europe. (AP PhotoAlessandra Tarantino)

WESTERN WILDFIRES - With crews battling wildfires that have killed at least 35 people, destroyed neighborhoods and enveloped the West Coast in smoke, another fight has emerged: leaders in the Democratic-led states and President Donald Trump have clashed over the role of climate change ahead of his visit Monday to California. By Lindsay Whitehurst and Sara Cline. SENT: 990 words, photos.

VIRUS OUTBREAK-FOOD INSECURITY — About 2 million New Yorkers are facing food insecurity, a number that the city’s mayor estimates nearly doubled in the pandemic amid the biggest surge in unemployment since the Great Depression. The scope of the problem outstrips previous crises such as the Great Recession, according to those who are working to combat it, and it’s not going away anytime soon. By Luis Andres Henao and Jessie Wardarski. SENT: 1,300 words, photos.

TROPICAL WEATHER - Storm-weary residents of the U.S. Gulf Coast are preparing for a new weather onslaught as Hurricane Sally churns toward them. Forecasters from the National Hurricane Center in Miami say Sally is expected to reach shore by early Tuesday, bringing flooding and other dangerous weather conditions to a region stretching from the western Florida Panhandle to southeast Louisiana. By Janet McConnaughey and Rebecca Santana SENT: 760 words, photo.

VIRUS OUTBREAK-ONE GOOD THING-CAIRO CHOIR — With their concerts on hiatus and their usual routine of rehearsals upended by the coronavirus, members of the Cairo Celebration Choir joined virtually with musicians and soloists to put out song and video that offer a hopeful message amid the virus gloom. SENT: 560 words, photos.

VIRUS OUTBREAK-HIV-FIGHT — The coronavirus pandemic has disrupted the fight against HIV. Clinics have stopped or limited testing for the AIDS virus, and public health officials overwhelmed by demands to control COVID-19 have shifted staff away from tracking HIV patients. SENT: 1,000 words, photos.

VIRUS OUTBREAK-ITALY-BERLUSCONI — Former Premier Silvio Berlusconi has been released from the hospital after what he says was an “insidious” bout with COVID-19. SENT: 500 words, photos.

ITALY-VIRUS-HOTSPOT-BACK-TO-SCHOOL — The morning bell Monday marked the first entrance to the classroom for the children of Codogno since Feb. 21, when panicked parents were sent to pick up their children after the northern Italian town gained notoriety as the first in the West to record local transmission of the coronavirus. By Colleen Barry and Luca Bruno. SENT: 620 words, photos.

SOUTH DAKOTA-ATTORNEY GENERAL-FATAL ACCIDENT — South Dakota investigators says that Attorney General Jason Ravnsborg reported hitting a deer with his car on Saturday night but actually killed a pedestrian whose body was not found until the next day. SENT: 120 words.

GREENLAND-ICE SHEET — Scientists say an enormous chunk of Greenland’s ice cap, estimated to be about 110 square kilometers (42.3 square miles), has broken off in the far northeastern Arctic. SENT: 330 words, photos.

ELECTION 2020-TRUMP RALLIES — President Donald Trump and his campaign are openly defying health and safety guidelines aimed at containing the coronavirus as his rallies grow in size, calling them “peaceful protests” protected by the First Amendment. While Democratic governors have urged the president to reconsider, they haven’t gone all-out to block them. By Jill Colvin. UPCOMING: 800 words by 5 p.m., photos.

ELECTION 2020-SPENDING — President Donald Trump’s massive campaign war chest was supposed to finance an onslaught of attacks that would destroy Joe Biden’s chance of winning in November. But after months of profligate spending, the attacks did little to diminish the Democratic nominee’s standing. Trump’s formidable cash advantage has evaporated. And it is Biden who over the past month has outspent Trump by nearly double, advertising data show. By Brian Slodysko. SENT: 1080 words, photo.

TRUMP-FOREIGN POLICY —- In the past two weeks, President Donald Trump has notched a string of diplomatic wins that he’s showcasing to voters ahead of the election, yet his report card on the most serious threats to U.S. national security shows an incomplete. By Deb Riechmann. UPCOMING: 900 words by 4 p.m., photo. With: UNITED STATES-QATAR — The Trump administration is hoping to capitalize on agreements to be signed this week between Israel, the United Arab Emirates and Bahrain by pressing for an end to a dispute that has roiled relations between the Gulf Arab countries. SENT: 370 words, photo.

ELECTION 2020-BIDEN LEGAL TEAM — Democratic presidential nominee Joe Biden is assembling a team of top lawyers in anticipation of court challenges to the election process that could ultimately determine who wins the race for the White House. By Eric Tucker. UPCOMING: 780 words by 5 p.m. photos.

VIRUS OUTBREAK-SCHOOL CHOICE — Millions of American children are starting the school year online because of the pandemic. The Trump administration is hoping to convert their parents’ frustration and anger into newfound support for school choice policies that Education Secretary Betsy DeVos has long championed but struggled to advance nationally. By Collin Binkley.. SENT: 1170 words, photos.

FATAL-POLICE-SHOOTING-PENNSYLVANIA — A police officer in Pennsylvania fatally shot a man during a domestic disturbance call, leading to street protests and vandalism. SENT: 530 words.

DEPUTIES-SHOT-CALIFORNIA - Authorities were continuing the search for a gunman who shot and wounded two Los Angeles County sheriff’s deputies in an apparent ambush in their squad car. The department announced a $100,000 reward for information leading to an arrest. SENT: 870 words, photo.

RUSSIA-BELARUS - Belarus’ authoritarian president visited Russia in a bid to secure more loans and political support, as demonstrations against the extension of his 26-year rule entered their sixth week. SENT: 850 words, photos.

VIETNAM-LAND DISPUTE — A Vietnamese court has sentenced two villagers to death in the killings of three policemen during a clash over a land dispute. State media say 27 other villagers received sentences of up to life imprisonment. SENT: 300 words.

YEMEN — A new report says warring parties in Yemen’s yearslong conflict are “severely restricting” the delivery of desperately needed aid as the country slides toward famine amid the coronavirus pandemic. SENT: 400 words, photos.

BRITAIN-ASSANGE — An American lawyer has told an extradition hearing for Julian Assange that the WikiLeaks founder faces decades in prison if he is convicted on spying charges in the United States. SENT: 300 words, photos.

ISRAEL-PALESTINIANS — An Israeli court has handed down three life sentences to a Jewish extremist convicted in a 2015 arson attack that killed a Palestinian toddler and his parents. SENT: 400 words, photo.

LEBANON-MIGRANTS — The U.N. peacekeeping force in Lebanon says it has rescued 36 people on a ship carrying migrants outside Lebanon’s territorial waters. SENT: 340 words.

EUROPE-CHINA — The European Union is urging China to further open its markets up to European companies and prove that it really does want to secure an investment agreement this year with the bloc.. SENT: 560 words, photos.

JAPAN POLITICS — Yoshihide Suga was elected as the new head of Japan’s ruling party, all but assuring that he will become the country’s new prime minister when a parliamentary election is held later in the week. SENT: 780 words, photos.

RUSSIA-REGIONAL-ELECTIONS — Early official results from regional elections across Russia show that the main Kremlin party has retained its dominance, although the opposition made gains in some areas. SENT: 600 words, photos.

IRAN-GERMANY-WRESTLER — Iran has summoned Germany’s ambassador after his embassy in a tweet criticized the execution of a wrestler after President Donald Trump asked for the 27-year-old man’s life to be spared. SENT; 400 words, photo.

VIRUS OUTBREAK-TREATMENTS — A drug company says that adding an anti-inflammatory medicine to a drug already widely used for hospitalized COVID-19 patients shortens their time to recovery by an additional day. Eli Lilly announced the results from a study of 1,000 people sponsored by the U.S. National Institute of Allergy and Infectious Diseases. SENT: 340 words, photo.

VENUS-POSSIBLE LIFE — Astronomers looking at the atmosphere in neighboring Venus see something that might just be a sign of life. In a study published Monday, they say they found the chemical signature of a noxious gas called phosphine. On Earth, phosphine is associated with life. It’s found at the bottom of ponds, in badger guts and in penguin guano. SENT: 800 words, photo.

NVIDIA-ARM-HOLDINGS — U.S. graphics chip maker Nvidia plans to buy U.K.-based Arm Holdings in a deal worth up to $40 billion. The move would create a global powerhouse in the semiconductor industry. SENT: 700 words, photo.

TIKTOK-ORACLE-DEAL — The owner of TikTok has chosen Oracle over Microsoft as the American tech partner that could help keep the popular video-sharing app running in the U.S., according to a person familiar with the deal who was not authorized to speak publicly about it. By Matt O’Brien and Tali Arbel. SENT: 940 words.

HKN--GOLDEN KNIGHTS-STARS -- The Stars are on the cusp of their first Stanley Cup Final appearance in 20 years, entering Game 5 with a 3-1 series lead against Vegas. Dallas, behind goalie Anton Khudobin, has been one of the best teams in the bubble. UPCOMING: 750 words, photos. Game starts 8 p.m.

BKN--TIPOFF -- The Clippers are one win from their first conference finals. The Nuggets can become the first NBA team to twice advance from 3-1 playoff deficits in the same season. Game 7 of the West semifinals is Tuesday night. By Basketball Writer Tim Reynolds. UPCOMING: 700 words, photos by 4 p.m.

GLF—US OPEN-THE QUALIFIER — The U.S. Open begins Thursday at Winged Foot in suburban New York. The tradition of qualifying for the tournament dates to World War I. This year, with the coronavirus putting all qualifying on hold, the U.S. Open is not quite “open.” By National Writer Eddie Pells. SENT: 1,050 words, photos.