State and local officials around the U.S. are rolling back social-distancing rules again after an abortive effort over the summer, allowing bars, restaurants and gyms to open. Fans are gathering mask-free at football games. President Donald Trump is holding crowded indoor rallies.

While some Americans may see such things as a welcome step closer to normal, public health experts warn the U.S. is setting itself up for failure — again.

“Folks are becoming very cavalier about the pandemic," said Mark Rupp, professor and chief of infectious diseases at the University of Nebraska Medical Center. Nebraska's governor ended nearly all of his state’s restrictions on Monday, even with new cases of the coronavirus on the rise. 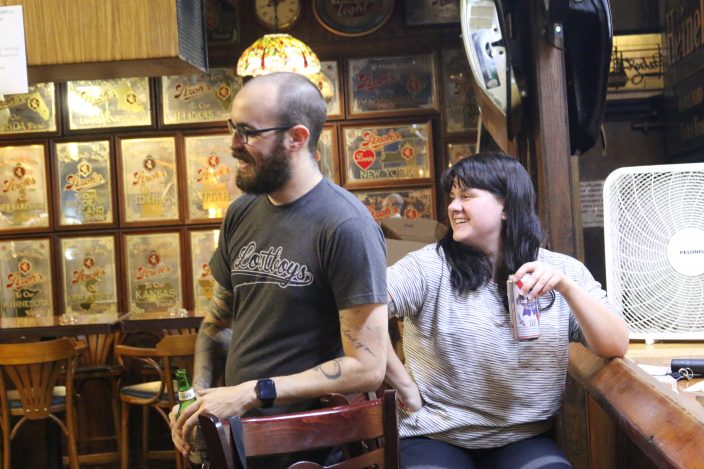 Zach Preston and his wife Allie Preston are regulars at The Leon Pub in Tallahassee, Fla. They spent Monday night, Sept. 14, 2020, at the once-popular watering hole. The pub hopes that more of its patrons will begin returning to help revive business in the wake of the coronavirus pandemic. (AP PhotoBobby Caina Calvan)

“I think it is setting us up for further transmission and more people getting ill and, unfortunately, more people dying," Rupp said.

The virus is blamed for more than 6.5 million confirmed infections and 195,000 deaths in the U.S., by far the highest totals of any country, according to the count kept by Johns Hopkins University.

While case numbers have fallen from a peak average of 67,000 new infections per day in late July to about 36,000 now, the numbers remain staggeringly high. Deaths are running at about 750 a day, down from a peak of over 2,200 in late April.

In recent days, Mississippi has allowed restaurants to expand their customer capacity to 75%. New Jersey reopened gyms and indoor dining at restaurants, though with limited capacity. Michigan’s governor allowed gyms to reopen and organized sports to resume. County commissioners in Pinellas County, Florida, on Thursday are set to discuss whether to repeal their mask ordinance.

Public health experts noted that it is safe to resume certain activities in communities where there are low levels of infection.

The nation’s top infectious-disease expert, Dr. Anthony Fauci, appeared via video at Vermont Gov. Phil Scott’s virus briefing Tuesday and praised the state's response and its steps to reopen safely. He chalked it up to Vermont's emphasis on wearing masks, avoiding crowds and taking other simple precautions.

But elsewhere, experts said, case counts are too high to resume higher-risk activities, such as going to bars, gyms, theaters and stadiums, participating in close contact sports or eating inside a restaurant.

In most communities in Florida, bars were allowed to reopen at 50 percent capacity on Monday, while keeping some precautions in place. But Florida's three biggest counties — Miami-Dade, Broward and Palm Beach — are keeping their bars closed because of high case numbers.

Even in places where drinking establishments have been given the OK to reopen, some owners and customers alike are hesitant.

At The Leon Pub, a smoky bar a mile up the road from Florida’s Capitol in Tallahassee, the Monday night crowd was sparse, as it has been for much of the long, oppressive summer.

Among the few there were Allie Preston and her husband. “We’ve been cooped up for a while. It was nice to have normalcy,” she said.

Jim Smith. owner of Poor Paul’s Pourhouse in Tallahassee, intends to keep his place closed until the outbreak is over.

“I miss going to work every day. I miss seeing the customers and employees," he said. “We have to get this thing under control.”

It’s not just government officials who are letting up on restrictions. In Milwaukee, the Roman Catholic archbishop said he will no longer excuse people from in-person worship unless they are ill or are caring for someone who is sick. Meanwhile, cases in Wisconsin are on the rise.

Some local officials are cracking down as they see cases climb.

In Wichita, Kansas, health officials made bar curfews and mask wearing mandatory. In Framingham, Massachusetts, officials said they have starting issuing $500 fines to property owners who violate the rules on gatherings and mask-wearing.

Public health experts said they worry they are seeing a pattern: A drop in cases leads officials and regular Americans to relax measures to stay safe, and infections and deaths make a comeback.

“Please, you’ve done so well, don’t let your guard down,” Fauci said during a call-in news conference during the video call with Vermont’s governor. “Because if we do, we are going to see surges that are going to put us back to where we were months ago.”

Calvan reported from Tallahassee, Florida, Ring reported from Stowe, Vermont. Associated Press reporters from around the United States contributed to this report.