Questionable play-calling. Debatable clock management. A rash of rookie mistakes. A barrage of injuries. It all added up to another last-minute loss for the Denver Broncos.

The Broncos have surrendered the lead in the final 30 seconds six times in Vic Fangio’s 17 games as their head coach and they’ve lost four of them. 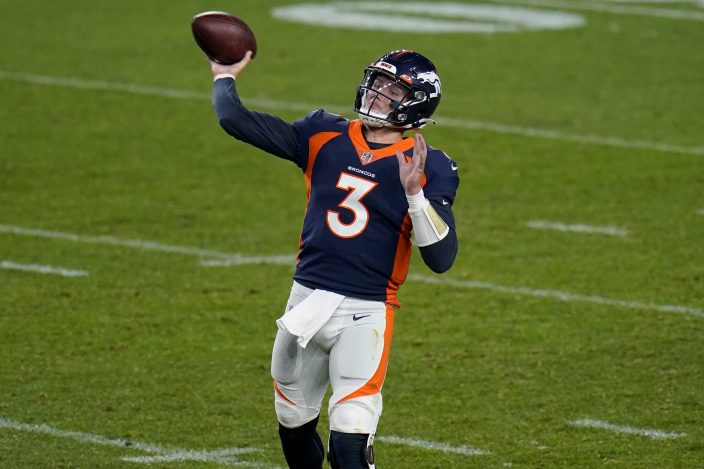 Denver Broncos quarterback Drew Lock (3) throws against the Tennessee Titans during the second half of an NFL football game, Monday, Sept. 14, 2020, in Denver. (AP PhotoJack Dempsey)

The latest one cut especially deep given all the blunders the Broncos had in their 16-14 loss to Tennessee on Monday night when Stephen Gostkowski atoned for four missed kicks by drilling a 25-yard field goal with 17 seconds left.

New offensive coordinator Pat Shurmur’s debut was dismal: 3 total yards in the third quarter to Tennessee's 105, and an ill-advised shovel pass from Drew Lock to Jake Butt on fourth-and-goal from the 1 that went for no gain. 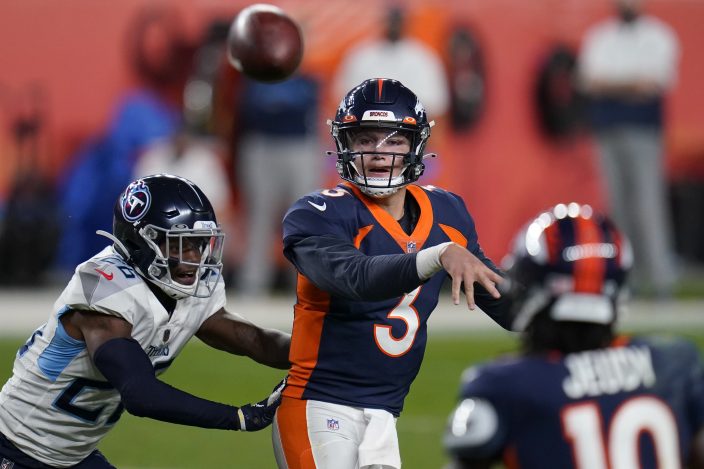 Unlike Titans tight end Jonnu Smith, who hauled in a scoring pass in the same scenario in the other end zone, Butt wasn’t across the goal line when he caught the pass and was stuffed at the line of scrimmage.

The biggest beef with Broncos fans, none of whom were allowed into the stadium over coronavirus concerns, was Fangio’s head-scratching decision to hold onto his timeouts after the Titans crossed midfield at the two-minute warning while trailing 14-13.

Banking on the three-time Super Bowl winner missing a fifth kick, Fangio chose not to ice the kicker or spend his timeouts to save as much time as possible for his young offense to respond.

“I didn’t think icing the kicker was worth it because he had been struggling anyway (but) I did miss a timeout there after the second-down play from the 29-yard line,” Fangio acknowledged a day later.

When Titans running back Derrick Henry “got 13 yards down to our 16, I should have called timeout there," Fangio said. "That was the one I missed.”

Instead, precious seconds ticked away to the amazement and amusement of the Titans.

“It was totally my fault there,” Fangio said Tuesday. “I had too much thought into what I was going to call next on defense. I missed it.”

In previous years, the head coach would lean on Mitch Tanney, the Broncos' former director of football analytics, for advice in these situations. The team parted ways with Tanney in the offseason and Fangio relies now on his offensive coaches for advice, although it's unclear if any was offered Monday night.

“All the coaches help chip in on that — the offensive coaches when we’re on defense and vice versa," Fangio said. "It’s easier when we’re on offense because I’m not calling the plays. It was my miss on that one and nobody else’s.”

So, the clock kept ticking and Gostkowski’s field goal left Denver just 17 seconds to get into Brandon McManus’ field-goal range.

“Yeah, I was doing the math, but 75 (yards) seemed to be too far,” Fangio said, and Lock's last heave hit the grass not far downfield.

The rest of the offense, which couldn’t even top last year’s paltry 17-point average. In the red zone, Lock sorely missed his favorite target, Albert Okwuegbunam, who was inactive. The rookie tight end caught 17 TD passes from Lock in their two years together at Missouri.

Shurmur, for the Broncos' failure to score from the 1 and for not keeping TE Noah Fant going after he had five catches for 81 yards by halftime. He was shut out in the second half.

Bouye (shoulder) and Lindsay (toe) went for MRIs Tuesday. OLB Bradley Chubb looked good in his return from a torn knee ligament. “He’s not where he was but he’s getting there and I think he’ll get there quickly,” Fangio said.

Jeudy’s two drops, including one at the 4-minute mark that might have salted this one away.

Fangio is hopeful Sutton can return this week. If Sutton gets back and Okwuegbunam works his way to the game-day active roster, Lock could settle in nicely against the Steelers.