The seven-time NL West champion Dodgers, being pushed by a Padres team that hasn’t been to the playoffs since winning the division in 2006, bounced back from a 7-2 loss in the opener of the series between the NL’s two best teams.

The Padres, cruising toward a berth in the expanded playoffs, lost for just the third time in 15 games. 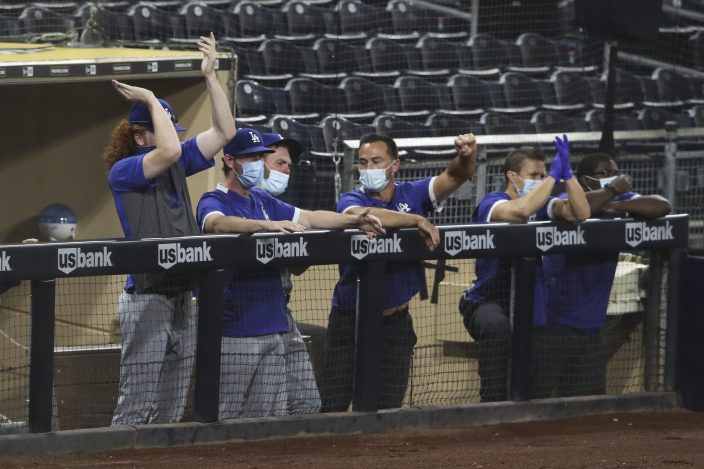 Kenley Jansen made it interesting in the ninth, loading the bases with one out before striking out Wil Myers and rookie Jake Cronenworth to record his 11th save in 13 chances.

Justin Turner had three singles in his return from the injured list, including an RBI hit in the first off Zach Davies (7-3), who had his career-high streak of five straight victories snapped.

Reigning NL MVP Cody Bellinger also had an RBI single, in the third, and Rios made it 3-1 when he homered deep into the seats in right leading off the fifth, his fourth. 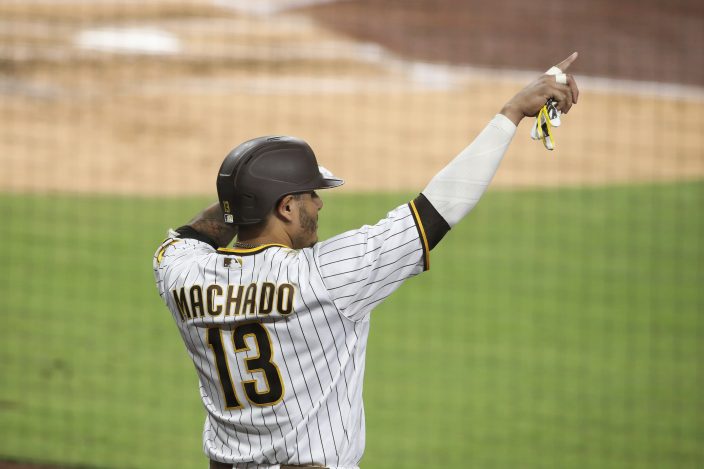 San Diego Padres' Manny Machado reacts after Trent Grisham reaches first base safely on a bunt against the Los Angeles Dodgers in the third inning of a baseball game Tuesday, Sept. 15, 2020, in San Diego. Jurickson Profar scored on the play. (AP PhotoDerrick Tuskan)

Gonsolin (1-1) held the Padres to one run and four hits, struck out two and walked none.

The 26-year-old rookie kept the Padres off balance except for the third, when they manufactured one run. Jurickson Profar hit a leadoff double over right fielder Mookie Betts, advanced on Greg Garcia’s sacrifice and scored when Trent Grisham beat out a bunt for a single.

After Grisham’s single, Gonsolin retired 14 of the next 15 batters. 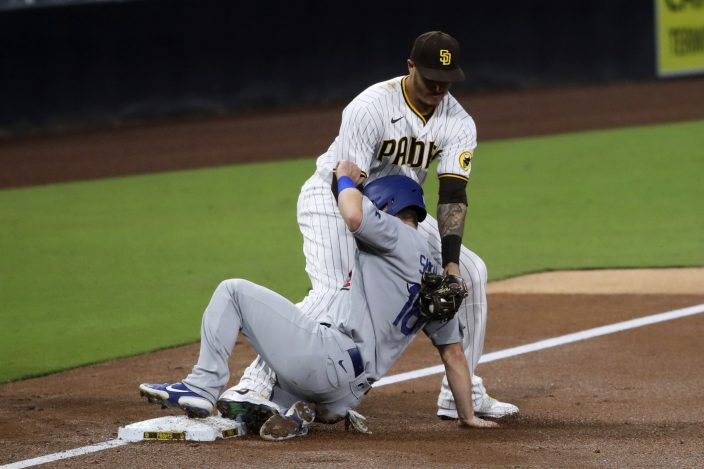 San Diego Padres third baseman Manny Machado applies a tag to Los Angeles Dodgers' Will Smith in the third inning of a baseball game Tuesday, Sept. 15, 2020, in San Diego. The Padres challenged the call of safe and it was over turned after review. (AP PhotoDerrick Tuskan)

Davies, who also lost to the Dodgers on Aug. 12, allowed three runs and eight hits in six innings, struck out five and walked one.

Dodgers: Activated Turner from the 10-day injured list. He missed 13 games with a left hamstring strain. Before going on the IL, Turner was batting .282 with two homers and 20 RBIs in 32 games during the shortened season. He started at DH. In a corresponding roster move, the Dodgers optioned RHP Josh Sborz. ... Reliever Caleb Ferguson left with an undisclosed injury after facing just one batter in the eighth.

Dodgers: RHP Dustin May (1-1, 2.81 ERA) is scheduled to start the series finale Wednesday afternoon. Both of his decisions came against San Diego.

Padres: Were expected to name starter after Tuesday night’s game.