The family holiday so many look forward to each year is going to look different in the pandemic as parents and the people who provide Halloween fun navigate a myriad of restrictions and safety concerns.

Some were looking extra-forward to Halloween this year because it falls on a Saturday, with a monthly blue moon to boot. 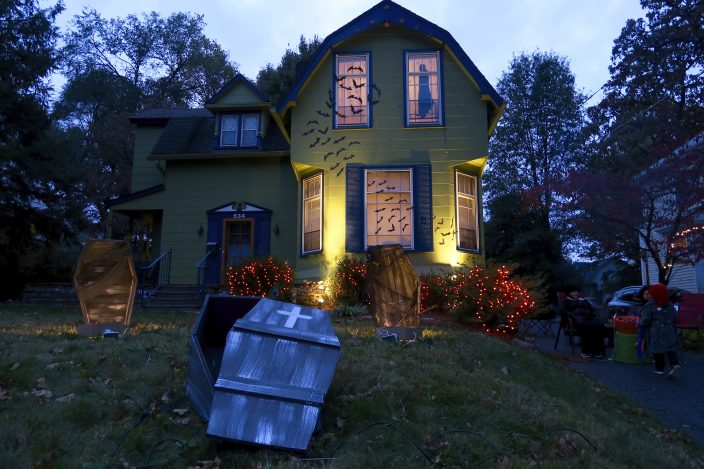 This 2017 photo released by Charles Fremont shows a home decorated for Halloween in Webster Groves, Mo. On a typical Halloween in the St. Louis suburb, neighbors go all out to decorate their houses and yards with spooky skeletons, tombstones and jack-o'-lanterns as up to 1,000 people pack the blocked-off street to carry on an old tradition: Tell a joke, get a treat. This Halloween is going to be vastly different for many. Parents and governments are weighing whether door-to-door trick-or-treating can safely happen. (Charles Fremont via AP)

Decisions are outstanding in many areas on whether to allow kids to go door to door or car trunk to car trunk in parking lots in search of candy, with Los Angeles first banning trick-or-treating, then downgrading its prohibition to a recommendation.

Other events have been canceled or changed, from California's Half Moon Bay to New York's legendary Sleepy Hollow — and points in between.

On a typical Halloween along Clark Avenue in the St. Louis suburb of Webster Groves, neighbors go all out to decorate their houses and yards with spooky skeletons, tombstones and jack-o'-lanterns as up to 1,000 people pack the blocked-off street to carry on an old tradition: Tell a joke, get a treat. 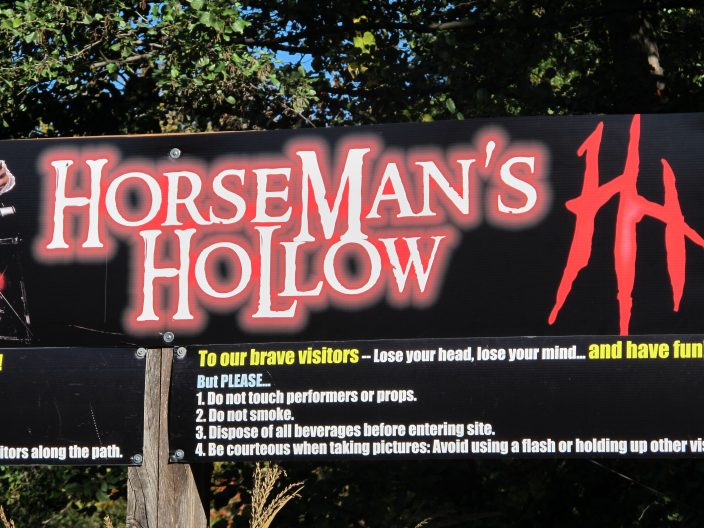 FILE - This Oct. 18, 2013 photo shows the entrance to the Horseman's Hollow Halloween attraction in Sleepy Hollow, N.Y. This Halloween is going to be vastly different for many. An association for haunted attractions estimates half among 800 or so of its members won't open. Parents and governments are weighing whether door-to-door trick-or-treating can safely happen. (AP PhotoJim Fitzgerald, File)

Not this year. There will likely be no warm bags of popcorn, cups of hot chocolate or cotton candy doled out in exchange for the laughs as residents figure out how to pivot.

“We plan to decorate the house as usual so families can feel the Halloween spirit on their evening walks," said Kirsten Starzer, mom to two kids, ages 11 and 15. "We will put up a sign that says, `See you next year!'”

Along the Pacific Coast about 25 miles south of San Francisco, this Halloween was meant to be a milestone for the Half Moon Bay Art & Pumpkin Festival. The two-day event, now canceled, usually draws up to 300,000 people from around the world to show off parade floats and school bands for the holiday.

This mage released by Zolli Candy shows 15-year-old candy entrepreneur Alina Morse posing next to a decorated tree for Halloween. The family holiday so many look forward to each year is going to look different in the pandemic as parents and the people who provide Halloween fun navigate a myriad of restrictions and safety concerns. Morse suggests fashioning a Halloween candy tree decorated with lights and treats so kids can pluck their own from a porch or yard. (Klint BrineyZolli Candy via AP)

“It was supposed to be our 50th year. I guess we'll have to celebrate that in 2021,” said Cameron Sinn, a local business owner and president of the festival. “This year we have other things to worry about.”

The kick-off event the week before, the Safeway World Championship Giant Pumpkin Weigh-Off, will carry on with no public spectators but plenty of humongous orange contestants as the judging goes virtual. With any luck, a potential world record-breaker from the U.K. will make it safely to Half Moon Bay. Its grower has a shot at $30,000 if he sets a new record.

There's still some Halloween fun to be had in Sleepy Hollow more than 200 years after Washington Irving published his classic story about the headless horseman who terrorized a hapless Ichabod Crane. But the undead, evil and insane who usually entertain at Philipsburg Manor won't be present for the annual walk-through horror attraction Horseman's Hollow. 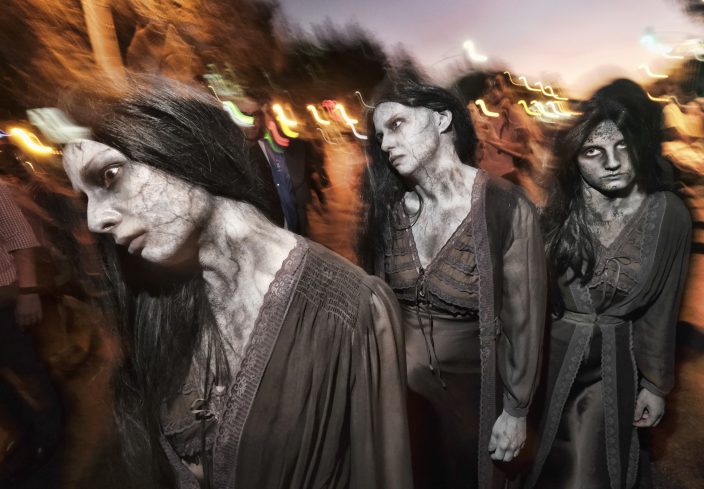 FILE - In this Oct. 31, 2018, file photo, zombie sisters maneuver their way down Santa Monica Boulevard in West Hollywood, Calif., during the West Hollywood Carnaval and Halloween Parade. The holiday so many look forward to each year is going to look different in the pandemic as parents and the people who provide Halloween fun navigate a myriad of restrictions and safety concerns. (AP PhotoRichard Vogel, File)

It, too, is a pandemic casualty.

So is a popular festival in the Kansas City suburb of Shawnee, Kansas, in which children stuff straw into donated clothes to make their own scarecrows.

In North Kansas City, Missouri, the city’s parks and recreation department canceled its Halloween in the Park event, instead inviting families to pick up a mystery box with candy and other surprises inside.

“The health and safety of our children and families are our priority during this time,” the city explained on its website.

While the future is uncertain for trick-or-treating, Americans have been stocking up on candy. U.S. sales of Halloween-themed chocolate and candy were up 70% over 2019 in the four weeks ending Aug. 9, according to the National Confectioners Association.

Ferrara Candy Co., which makes a Halloween staple, Brach’s Candy Corn, said most of its retail partners asked for early shipments of Halloween candy because of expected demand. Target, however, is reducing candy assortments in anticipation of less trick-or-treating. It will give away surprise Halloween bags to shoppers who drive up to its stores in October.

CVS Pharmacy said it has scaled back the number of large and giant bags of candy its stores will receive in favor of smaller bags for smaller outings and family gatherings.

Feeding the desire for safety, Walmart is bringing in more masks that can pull double duty as costume accessories, such as versions that feature the words “princess” or “queen.” Walgreens has increased its assortments of indoor and outdoor Halloween decorations, and it stepped up offerings of beverage and snack options for entertaining at home.

Candy-getting scenarios are afloat on social media, with some planning treat tosses to stationary children in their yards so the young don't have to leave their pandemic bubbles. Others are considering long sticks with hooks for candy buckets at the end, offering social distance at collection time, or long chutes to send the candy through to dressed-up recipients.

Alina Morse, a 15-year-old candy entrepreneur outside Detroit, suggests fashioning a Halloween candy tree decorated with lights and treats so kids can pluck their own from a porch or yard.

"Selecting a treat from the tree makes the safe, self-serve experience much more fun, said Alina, who heads Zolli Candy.

None of that is enough for some parents wary about going door to door with their kids, while others are willing, with care, if their areas allow it.

In Chicago's Lincoln Park neighborhood, Jamie Bender said it all depends for her two kids, ages 3 and 5.

“If our neighbors are wearing masks when they open the door, we would let the kids trick-or-treat a few houses then do the obligatory wipe-down of candy wrappers," she said.

Halloween is Camille Maniago's 10th birthday. With Halloween on a Saturday, her family in Long Beach, California, was going to go big, but the pandemic put a stop to that.

“We’re not sure what we’ll do now, but it will probably involve a family costume and a small celebration with our immediate pod,” said Camille's mother, Rachel Maniago. “I have friends who were thinking of planning Easter egg style candy hunts for their kids in their yards in costumes and finishing it with a movie night. Definitely not the same, but I think it has a festive element to it.”

While many haunted houses and events indoors or in tight spaces aren't happening this year, the folks at the world record-holding largest temporary corn maze in Dixon, California, are pressing on, starting Sept. 27.

At 60 acres, the maze at Cool Patch Pumpkins now has widened paths. Visitors must walk through with live-in household members only, and masks are required when social distance can't be maintained.

On the Halloween haunts front, Brett Hays of the Haunted Attraction Association, said roughly half the attractions among his 800 or so members will not be able to run this year due to the pandemic.

“It's so uneven in terms of regulations right now,” said Hays, the group's president. “Whatever local agencies have been put in charge of this really are clamoring to try to get a hold of what's going on and be able to handle it."

A few haunts have already opened, he said, “and they're having to really stay after people to keep them distanced and to get them to keep their masks on. It's a lot of babysitting the customers."

A few haunts have created drive-thru experiences, an approach Hays isn't a huge fan of, noting the potential danger of the startle reflex in drivers with their feet on gas pedals. Other attractions have gone to timed tickets. Many expect a 50 percent reduction in attendance in an industry that usually generates about $1.14 billion in annual ticket sales, primarily during Halloween season.

“Nobody's going to have a great year,” Hays said. "There's no doubt about it.”