The Los Angeles Dodgers became the first team to clinch a playoff spot in the pandemic-shortened season, beating the San Diego Padres 7-5 Wednesday behind Dustin May's gutty effort out of the bullpen and home runs from AJ Pollock and Chris Taylor.

Will Smith drove in three runs for the seven-time defending NL West champion Dodgers, who opened a 3 1/2-game lead in the division by winning two of three in the matchup of the NL's two best teams. 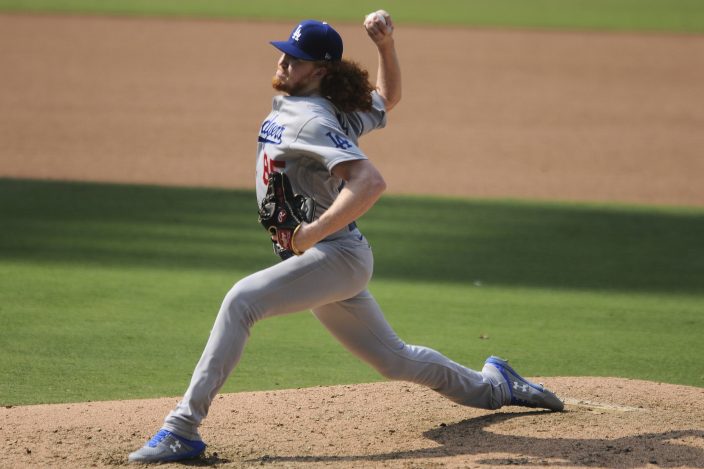 At 35-15, the Dodgers breezed into the expanded 16-team postseason field. Los Angeles is seeking its first World Series title since 1988.

San Diego, quieted by Dodgers pitching a second straight game even as it heads for its first playoff berth since winning the division in 2006, has lost two straight for the first time since mid-August.

San Diego’s Fernando Tatis Jr., who had been considered the NL MVP front-runner recently, went 0 for 4 to extend his slump to 2 for 27 over eight games. His average has dropped from .314 to .281. 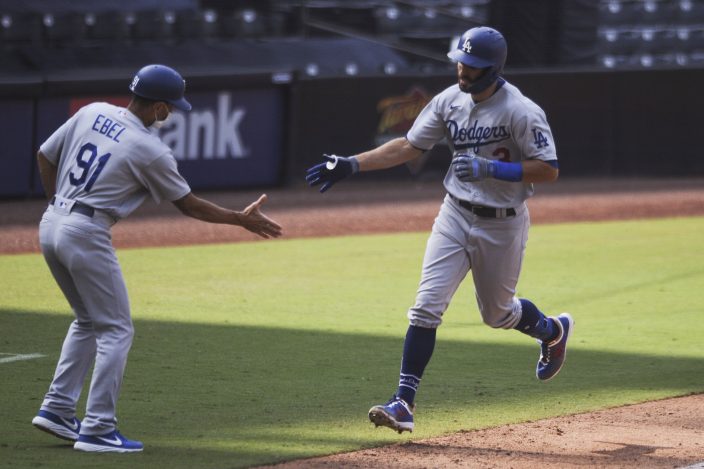 May, who had been scheduled to start before manager Dave Roberts decided to go with a bullpen day, was the Dodgers' third pitcher of the game. He went 5 1/3 innings and was in control until Jurickson Profar homered to right field with two outs in the seventh to pull the Dodgers to 7-3. Mitch Moreland reached on an error by second baseman Gavin Lux opening the inning.

After Profar’s homer, May struck out Trent Grisham and blew off some steam by yelling a few profanities that could be heard around empty Petcom Park. Grisham angered the Dodgers by briefly posing at the plate after homering off Clayton Kershaw in the Padres' 7-2 win Monday night.

May allowed Manny Machado’s solo homer with one out in the eighth, his 14th, and was lifted by Roberts. 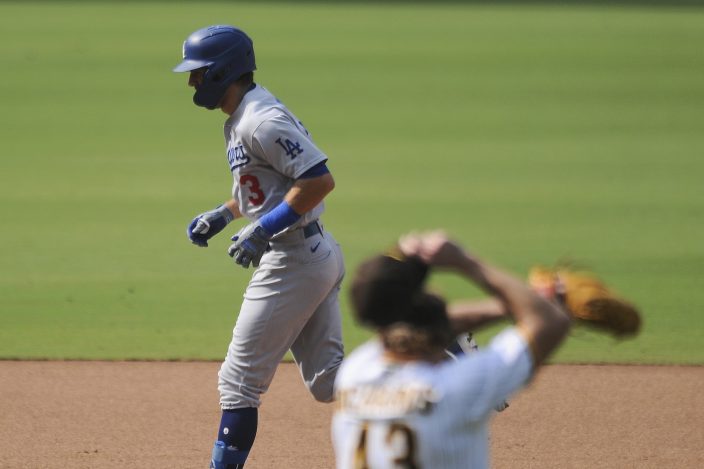 Until the seventh, May had breezed through four innings by allowing only a single and a walk. May struck out six in .

Pedro Baez got the final two outs for his second save. 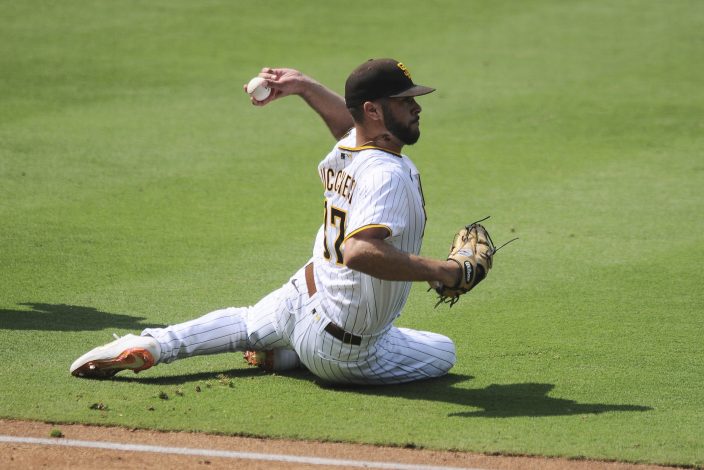 San Diego Padres starting pitcher Joey Lucchesi slips while throwing after fielding a ground ball off the bat of Los Angeles Dodgers' Will Smith during the third inning of a baseball game Wednesday, Sept. 16, 2020, in San Diego. Smith was safe at first on the play and Justin Turner scored from third. (AP PhotoDerrick Tuskan)

Pollock homered past the palm trees to the right of the batter’s eye in straightaway center field off rookie Adrian Morejon (2-1) with two outs in the second. It was his 11th. Taylor greeted Garrett Richards with a leadoff shot into the second deck in left -center leading off the sixth, his sixth, for a 7-1 lead.

San Diego tied it in the bottom of the inning. Wil Myers hit a one-out double off Graterol, who made way for Kolarek. Jason Castro doubled with two outs to bring in Myers. 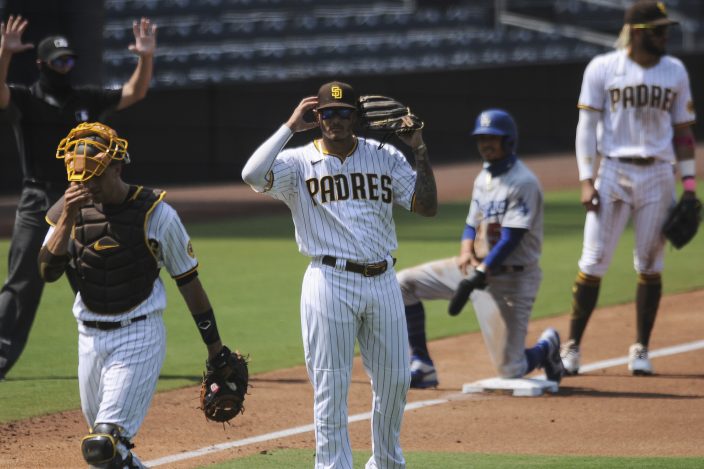 San Diego Padres third baseman Manny Machado signals to the dugout to review a call during the third inning of the team's baseball game against the Los Angeles Dodgers on Wednesday, Sept. 16, 2020, in San Diego. Dodgers' Mookie Betts was called safe on the play at home but after review the call was overturned. (AP PhotoDerrick Tuskan)

The Dodgers regained the lead in the third against Joey Lucchesi, who opened the season in the rotation before being sent to the alternate training site after two starts. Making his first big league relief appearance, he allowed Max Muncy’s two-run double and Smith’s RBI infield single in the third. Lucchesi slipped trying to field Smith’s checked-swing dribbler and the catcher beat it out for a hit.

Dodgers: Placed LHP Caleb Ferguson on the IL with an injured left elbow. He was scheduled to have an MRI in Los Angeles on Wednesday after facing just one batter Tuesday night. To take his roster spot, RHP Josh Sborz was recalled. 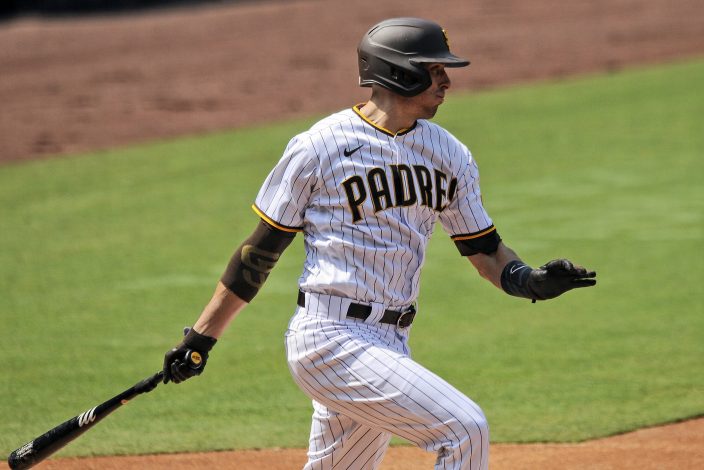 Dodgers: LHP Julio Urías (3-0, 3.53) is scheduled to start the opener of a four-game series Thursday night at Colorado, which will counter with LHP Kyle Freeland (2-1, 3.54).

Padres: RHP Chris Paddack (3-4, 4.74) is scheduled to start Friday night in the opener of a three-game series at Seattle.