Kyle Gibson threw a four-hitter and Joey Gallo hit a ground-rule RBI double with two outs in the ninth inning to lift the Texas Rangers over the Houston Astros 1-0 on Wednesday night.

It was the first career shutout for the 32-year-old Gibson and third complete game — his previous one came in August 2016 with Minnesota against Atlanta.

Gibson (2-5) walked three and struck out a season-high nine to earn his first win since Aug. 15. He was 0-3 with an 8.10 ERA and eight homers allowed in his past five starts. 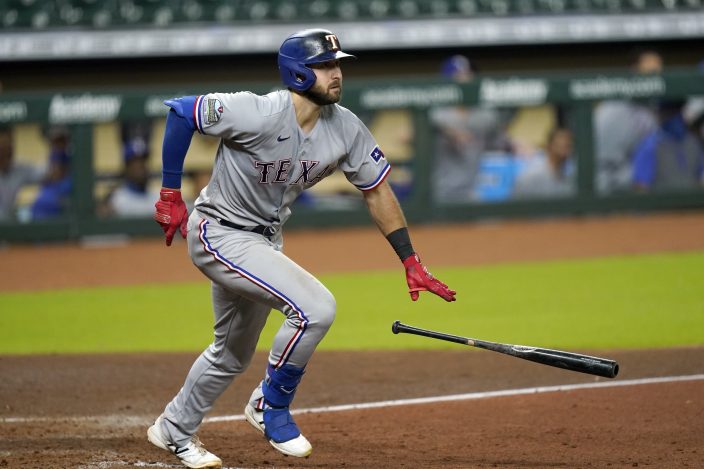 Texas Rangers' Joey Gallo drops his bat after hitting a RBI ground-rule double against the Houston Astros during the ninth inning of a baseball game Wednesday, Sept. 16, 2020, in Houston. (AP PhotoDavid J. Phillip)

The victory snapped a seven-game road skid for the Rangers, who are 5-18 away from home this season.

Leody Taveras singled on a sharp grounder that first baseman Yuli Gurriel couldn’t scoop up to start the ninth and advanced to second on a groundout by Isiah Kiner-Falefa for the second out.

Gallo had two strikes when he connected off Ryan Pressly (1-3) for a line drive that bounced just inside the right field line to send Taveras home. 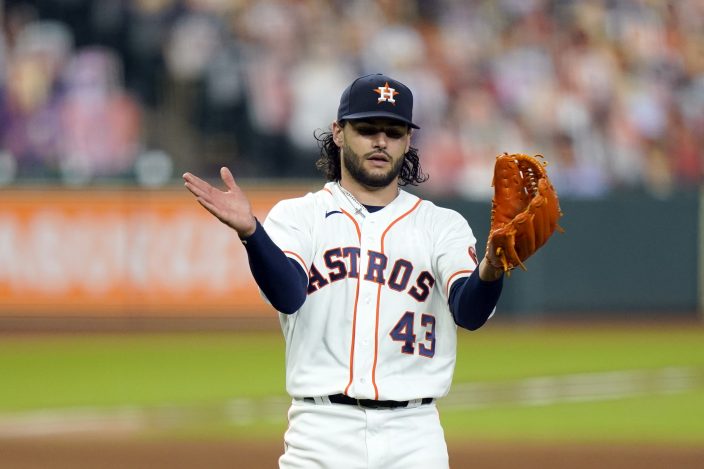 Gibson struck out Jose Altuve and Michael Brantley in the ninth before a double by Alex Bregman. After a short mound visit, Gibson retired Kyle Tucker on a lineout to first to end the game. The players on the field and in the Rangers dugout began to cheer loudly after the final out, and Gibson jumped up and down and smiled.

Gibson and Houston’s Lance McCullers Jr. made this one a pitchers' duel for most of the night. McCullers pitched seven shutout innings in his return after a 10-day stint on the injured list with nerve irritation in his neck. He allowed two hits and struck out eight without a walk.

McCullers allowed a double to Rougned Odor with two outs in the second before sailing through the next few innings, retiring 12 in a row before Taveras doubled with two outs in the sixth. But the right-hander got Willie Calhoun to pop out to end that inning and pitched a perfect seventh to end his night. 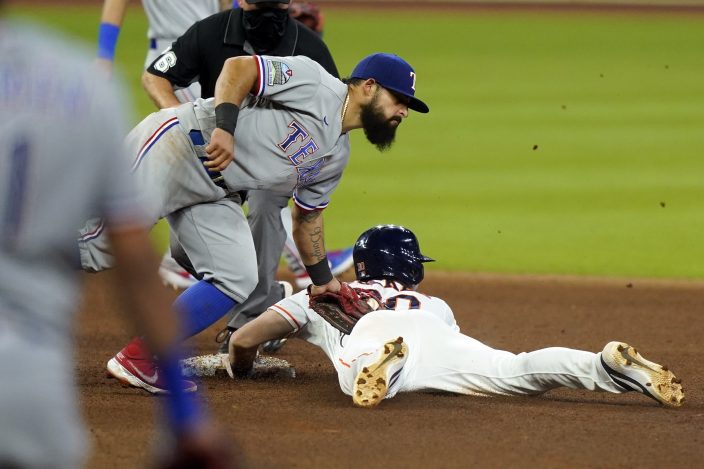 Josh James took over for the eighth and allowed a two-out single to Ronald Guzmán before striking out Jeff Mathis.

Gibson struggled with control early and walked two of his first four batters. But he struck out Tucker to end the first inning as the first of six straight Astros he retired. Altuve singled with two outs in the third, but Gibson set down his next 11 batters before Tucker singled with one out in the seventh.

Tucker was caught stealing and Gurriel lined out to end the frame. Gibson walked Martín Maldonado with two outs in the eighth before fanning George Springer. 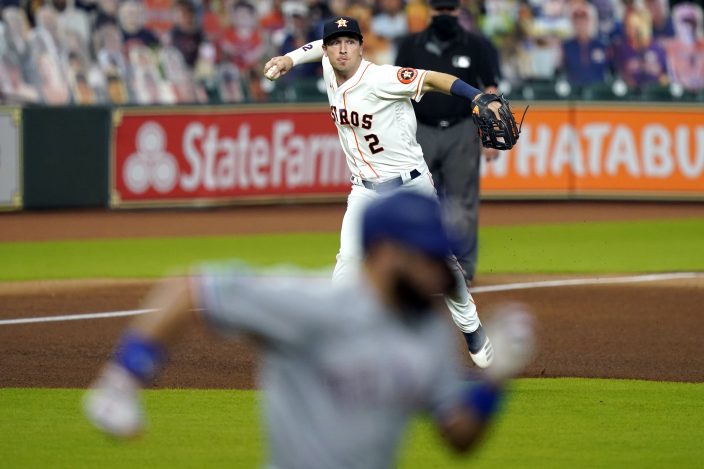 Houston Astros third baseman Alex Bregman (2) throws to first for the out after fielding a ground ball by Texas Rangers' Isiah Kiner-Falefa, bottom, during the fourth inning of a baseball game Wednesday, Sept. 16, 2020, in Houston. (AP PhotoDavid J. Phillip)

Astros: Houston ace Justin Verlander threw to hitters for the first time since he was injured in the team’s opener on July 24. Verlander, who has a strained right forearm, threw 50 pitches in the bullpen before throwing about 25 to hitters in two simulated innings. “He looked real good, especially for his first time out ... his control was good,” manager Dusty Baker said. Baker hopes the Astros can get Verlander back before the end of the regular season. But he said they likely won’t know what’s next for the reigning AL Cy Young Award winner until they see how he feels after Wednesday’s work. ... Third base coach Gary Pettis missed the game because of hip discomfort. First base coach Omar Lopez filled in for Pettis at third, and quality control coach Chris Speier was at first base.