Javier Báez's RBI single in the 10th inning lifted the Chicago Cubs to their fourth straight win, 3-2 over the Cleveland Indians, on Wednesday night in a game that was briefly delayed when a drone entered Wrigley Field and briefly landed on the outfield grass.

After Anthony Rizzo was walked intentionally to load the bases, Maton fanned Willson Contreras and Kyle Schwarber. Then Báez's liner to left scored Happ and sent the Indians to their eighth straight loss, their longest slide since June 2013. 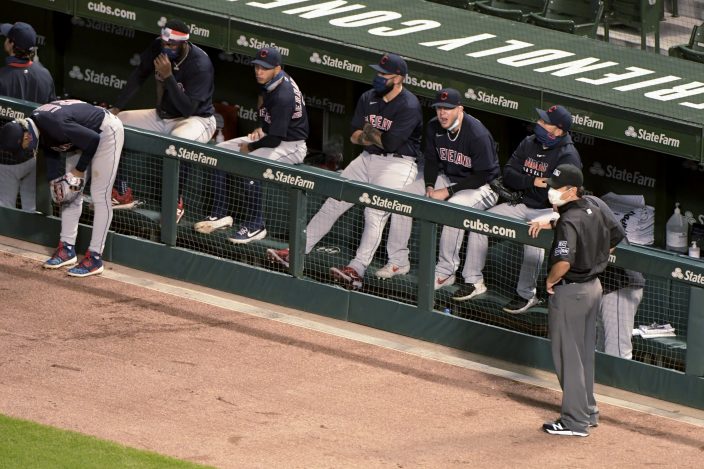 Cleveland Indians wait out a brief suspension of play during the fifth inning after a drone landed in center field, before taking off and flying out of the ballpark during a baseball game between the Chicago Cubs and the Indians on Wednesday, Sept. 16, 2020, in Chicago. (AP PhotoMark Black)

The Cubs won their fourth straight and strengthened their grip on first place in the NL Central.

Oscar Mercado hit a solo shot off Jon Lester in the fifth to tie the game at 2. 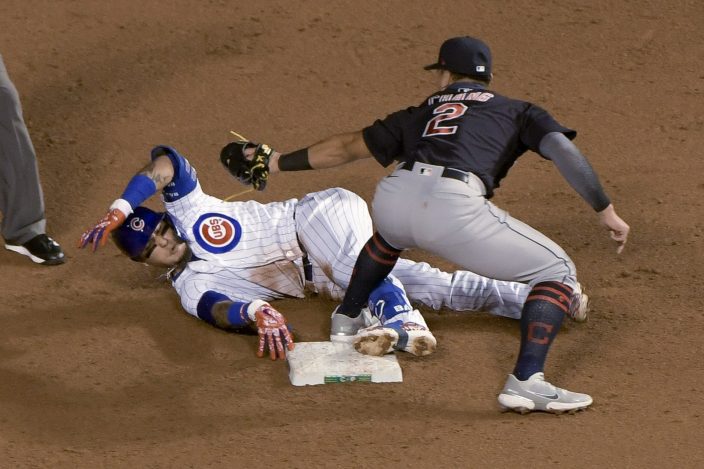 Chicago Cubs' Javier Baez (9) is tagged out by Cleveland Indians second baseman Yu Chang (2) during the second inning of a baseball game Wednesday, Sept. 16, 2020, in Chicago. Baez had singled, and tried to advance to second after the throw went to third. (AP PhotoMark Black)

Umpires hastily cleared the field when the small drone flew into the ballpark over the left-center bleachers as Contreras came to bat with with two outs in the bottom of the fifth.

After it landed, the blinking drone took off, hovered at about 100 feet, then pulled away and vanished into the night beyond the center-field scoreboard.

Following a 7-minute delay, Contreras resumed his at-bat and grounded out. 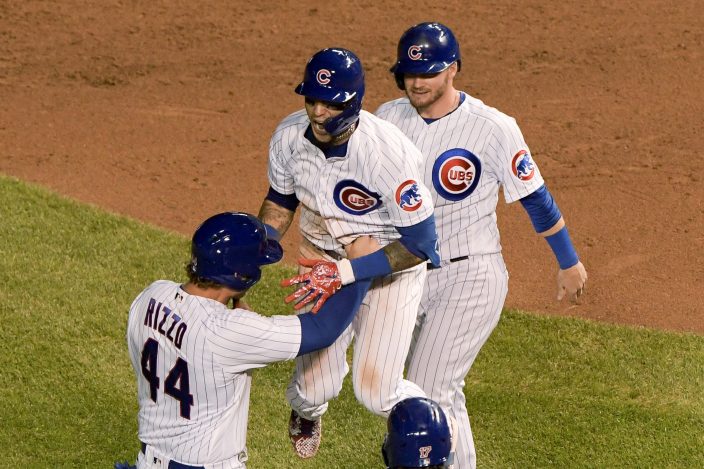 Chicago Cubs' Javier Baez, middle, celebrates with Anthony Rizzo (44) and Ian Happ (8) after driving in the winning run during the 10th inning against the Cleveland Indians in a baseball game Wednesday, Sept. 16, 2020, in Chicago. The Cubs won 3-2. (AP PhotoMark Black)

Aaron Civale allowed two runs on seven hits, leaving with runners at second and third and none out in the seventh. The right-hander hasn’t won since Aug. 19 and is 0-3 in his last five starts.

The 36-year-old lefty settled in after struggling with his control in the first inning. Francisco Lindor, who walked to lead off the game, scored from third on a wild pitch. The Cubs tied it in the second on Jason Heyward’s bloop single. Chicago moved ahead 2-1 in the fourth when Cameron Maybin’s infield single drove in Báez.

OF Ian Happ, the Cubs' union rep, said he supports isolating players in a playoff bubble starting with the division series. But he said rules “like asking permission to go for a walk” will be taxing. “It feels more like being a zoo animal than baseball player or human being,” Happ said. Cubs: LHP Andrew Chafin (sprained left index finger) threw 20-plus pitches in a simulated game Wednesday and “looked really sharp,” manager David Ross said. Chafin, acquired from Arizona at the trade deadline, has yet to pitch for the Cubs.

Indians: Gold Glove C Roberto Perez didn’t play Wednesday so he could get treatment on an condition that has been affecting his swing. Perez, who previously missed three weeks with a right shoulder strain, is expected back Thursday at Detroit. Austin Hedges, acquired from San Diego at the deadline in a nine-player trade, was behind the plate against the Cubs. … 2B Cesar Hernandez (paternity list) rejoined the team. He pinch-hit in the eighth and remained in the game.

Indians: AL ERA leader Shane Bieber (7-1, 1.53) takes the mound at Detroit on Thursday and tries to rebound from his lone loss, to the Twins last Friday in Minnesota. Rookie RHP Casey Mize (0-1, 5.85) pitches for the Tigers.