The first 29 games of the college football season exposed the toll coronavirus restrictions have taken on special teams' play.

The so-called third phase of the game got short shrift at a lot of schools before the season. Few teams made it through spring practices, and there were starts and stops with summer activities and preseason camps because of COVID-19 outbreaks. Throw in last-minute depth chart shuffling because of positive tests and special teams chaos has ensued. 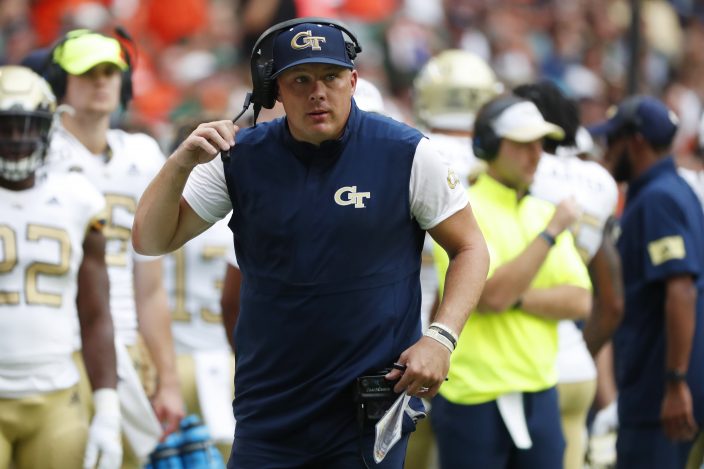 FILE - In this Saturday, Oct. 19, 2019, file photo, Georgia Tech head coach Geoff Collins is shown during the first half of an NCAA college football game against Miami, in Miami Gardens, Fla. Collins said his field goal unit normally runs eight live repetitions twice a week at practice, but he shortened those drills in a nod to social distancing amid the coronavirus pandemic. (AP PhotoWilfredo Lee, File)

Georgia Tech survived three foibles in the kicking game to beat Florida State 16-13, with Jude Kelley having two field goals and an extra point blocked. Kelley recovered to win it with a 32-yard field goal in the middle of the fourth quarter.

“That was the period we had 11 guys within 6 feet of each other for too long,” Collins said. “So we decided during a global pandemic not to do that period in elongated times like we’ve always done." 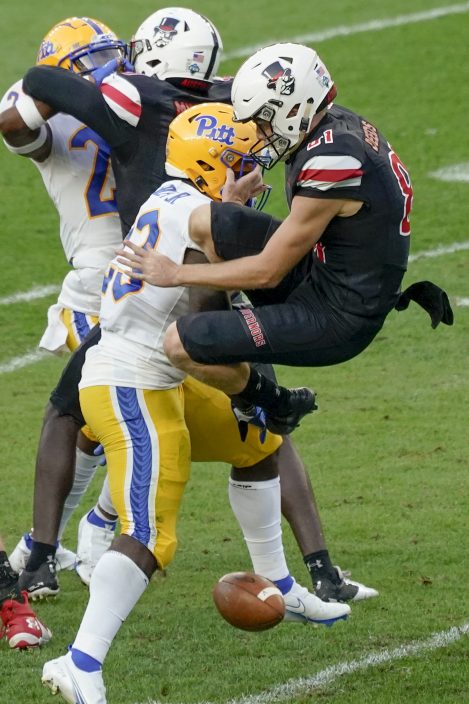 FILE - In this Saturday, Sept. 12, 2020, file photo, Pittsburgh's Todd Sibley Jr. (23) blocks a punt by Austin Peay punter Cole Deeds before returning it for a touchdown during the second half of an NCAA college football game, in Pittsburgh. The first 29 games of the 2020 college football season have exposed the toll coronavirus restrictions have taken on special teams play. (AP PhotoKeith Srakocic, File)

Georgia Tech wasn't alone. Wake Forest’s Nick Sciba, a Lou Groza Award semifinalist who was 24 for 25 on field goals in 2019, had a 44-yard attempt blocked and he hit the upright with a 31-yarder.

There have been 25 missed or blocked field goals in the Bowl Subdivision so far. The national accuracy rate is 65.8% compared with 74.9% for the 2019 season.

Arkansas State’s biggest problem has been punting. Ryan Hanson had his first punt of the season blocked by Memphis. In last week's win at Kansas State, Arkansas State overloaded the right side of the line on its first punt, allowing Will Jones II to fly in untouched from the opposite side for the block. 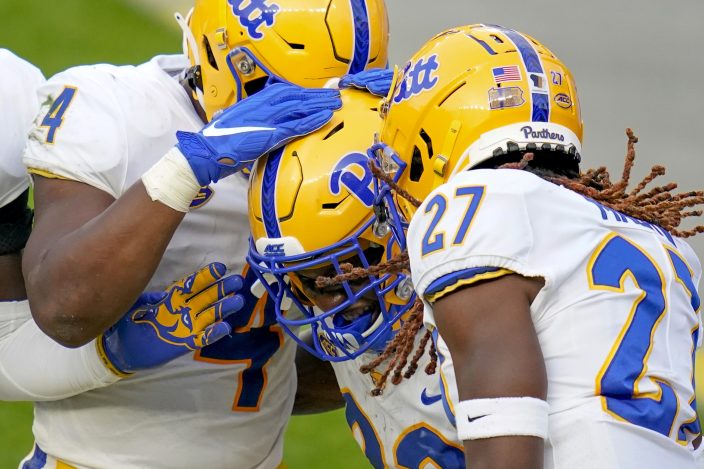 FILE - In this Saturday, Sept. 12, 2020, file photo, Pittsburgh's Todd Sibley Jr., center, celebrates with Buddy Mack III (27) and Daniel Carter (4) after blocking a punt by Austin Peay's Cole Deeds and then returning it for a touchdown during the second half of an NCAA college football game, in Pittsburgh. The first 29 games of the 2020 college football season have exposed the toll coronavirus restrictions have taken on special teams play. (AP PhotoKeith Srakocic, File)

Red Wolves defensive coordinator David Duggan said his team had fill-ins on special teams because several players weren't able to make the trip. Nine starters were out after testing positive for COVID-19.

“You’re coaching some guys on the fly and they’re trying to execute as best they can,” Duggan said. “Usually when you’re down a couple players, the first area that takes the hit is the special teams because your back-line guys are being pulled up to be starters, and those are your major contributors to special teams."

Louisiana-Monroe's special teams struggled in a loss at Army, which blocked a field goal and a punt while ULM return man Isaiah Phillips let two kickoffs slip through his hands. ULM's punt return unit was victimized by a fake that went for 47 yards.

Louisville's Logan Lupo had difficulty punting in the rain in a win over Western Kentucky. He dropped a perfect snap on his first attempt and later had a punt blocked, with both plays setting up WKU touchdowns.

The punting circus continued for Austin Peay in its loss at Pittsburgh. The Governors were down to their fourth long snapper in their Aug. 29 opener against Central Arkansas, and getting the ball to the punter was hit or miss. Against Pitt, the Governors gave up a blocked punt for a touchdown, and on another attempt Cole Deeds dropped the snap, picked up the ball and ran and then slipped as he tried a desperation punt. The ball hit a Pitt player in the chest.

In North Carolina's win over Syracuse, the Tar Heels had a muffed punt set up a Syracuse field goal, and there were two illegal blocks and a roughing penalty on kicks and punts. Syracuse missed a short field goal and on another attempt had to call timeout to get lined up.

Iowa State coach Matt Campbell said part of the problem was that his team had new personnel on special teams.

“Replicating the return at full speed is really a challenge and, especially when you play a team that does have great punt returner and has success in kick returns, that’s hard,” Campbell said.

The UTSA-Texas State game was decided by special teams. Texas State's Jeremiah Haydel ran back a punt 91 yards for a touchdown late in the fourth quarter, and all Alan Orona needed to do was make the extra point to give his team a one-point lead.

Orona hooked his kick wide right and then, with the scored tied in the second overtime, did the same thing on a 20-yard field-goal attempt. The Bobcats lost 51-48.

Texas State coach Jake Spavital said nothing is easy with special teams, whether it's getting the on-field operation to run smoothly or just getting the right people on the field. With players coming and going because of COVID-19 and injuries, the makeup of the units change. Even making sure no players are wearing the same jersey numbers on the field at the same time — a violation of NCAA rules — is a challenge.

“We had to change three kids' jersey numbers right before the game just so there wasn't any conflict of putting the same jersey number on the field,” Spavital said.