Netflix is producing and shooting an original series set in Japan about a journalist who challenges authority, hoping to woo this nation that’s hooked on watching good old TV.

Good timing. The series’ heroine is based on a muckraking real-life reporter, Isoko Mochizuki, who has doggedly questioned a politician who has just become prime minister, Yoshihide Suga. 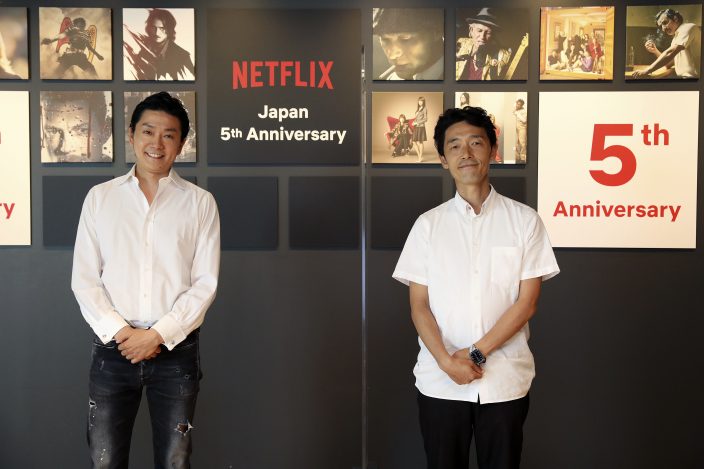 In this photo released by Netflix, Kaata Sakamoto, left, director of its content acquisition, and filmmaker Shinsuke Sato attend a livestream held from the Netflix Tokyo office on Sept. 7, 2020. After five years in Japan, Netflix now has 5 million households that have signed with the video-streaming service. The coronavirus pandemic, which has people staying home, has helped. But that number is still a fraction of Netflix's 193 million global paid members, and just 10% of Japan, where old-fashioned TV remains popular. Sato directs a live-action adaptation of cult manga, “Alice in Borderland” for Netflix. (Netflix via AP)

The Netflix series called “The Journalist” is based on the story of Mochizuki, a reporter for the Tokyo Shimbun, who kept asking questions of Suga at his news conferences as chief government spokesman, despite being cut off, ignored or ridiculed. That’s a sight common in the U.S. and some other nations but rare in hierarchical, orderly Japan.

The series will be directed by Michihito Fujii, who was behind a 2019 award-winning movie that Netflix has adapted for the series. For the Netflix series, Ryoko Yonekura, an actress known for portraying tough women, plays the reporter who like Mochizuki goes after cover-ups and scandals. It's slated for global streaming next year, Netflix announced this week.

The series was decided on long before it became clear earlier this month that Suga was destined to become prime minister.

“People were before looking for the lowest common denominator, a story that has travel ability,” Greg Peters, Netflix’s chief operating officer and chief product officer COO, told The Associated Press.

“What we see is that the stories that connect with people around the world are stories that are authentic, that are anchored in the local culture, a local time that really speak a place,” he said.

After five years in Japan, the video streaming service has 5 million subscribers, up from 3 million last year as the coronavirus pandemic has people looking for entertainment while they stay home. That’s still a fraction of the 193 million global paid members Netflix has, 73 million of them in the U.S. and Canada.

Netfix’s image in Japan suffered over the death earlier this year of Hana Kimura, who was in the reality show “Terrace House.” The female professional wrestler was found dead in an apparent suicide after becoming a target of social-media harassment.

“Terrace House” aired in Japan as a Fuji TV show in 2012, made with production company East Entertainment. Netflix, based in Los Gatos, California, said the series was licensed, although it’s billed as “a Netflix original series.”

Netflix acquired global streaming rights for the show from 2015. The episodes where Kimura appeared have been removed, but other episodes still air on Netflix.

“Our hearts go out to Miss Kimura’s family at this terrible time. Given this tragedy, all production and the launch of any new episodes have been postponed indefinitely,” Netflix said in a statement.

Amazon does not give a breakdown by nation for its 150 million global Amazon Prime users, but its subscribers are estimated to be about three times Netflix's. Netflix officials say some Amazon users may use its online retail services without watching streaming content.

Netflix's director of content acquisition, Kaata Sakamoto, has been with Netflix since its Japan launch five years ago. He said hardly anyone expressed interest in making content for Netflix at first.

One hit among its original Japanese content has been its “The Naked Director,” based on the life of a pornography filmmaker. It premiered last year and a second season is being shot.

The chance to pursue topics shunned by mainstream TV coupled with access to global audiences makes Netflix potentially appealing for content creators, according to Motohiro Tokuriku, an expert on net trends who works at Japanese online content platform Note.

“I used to have the theory that Japanese are too used to viewing TV for free, and won’t ever sign up for paid streaming services, but that’s definitely changing,” Tokuriku said.

Orthodox priest shot at church in France; attacker at l ...