India’s defense minister said Thursday the country faces challenges in its border dispute with China and urged Beijing to sincerely implement an understanding they reached previously to completely disengage forces from the Ladakh region.

Rajnath Singh told the upper house of Parliament that China has amassed troops and weapons in Ladakh in violation of agreements reached in the 1990s and is trying to alter the status quo in the region through aggressive actions.

He said that was not acceptable and that India is seeking a peaceful resolution through talks. 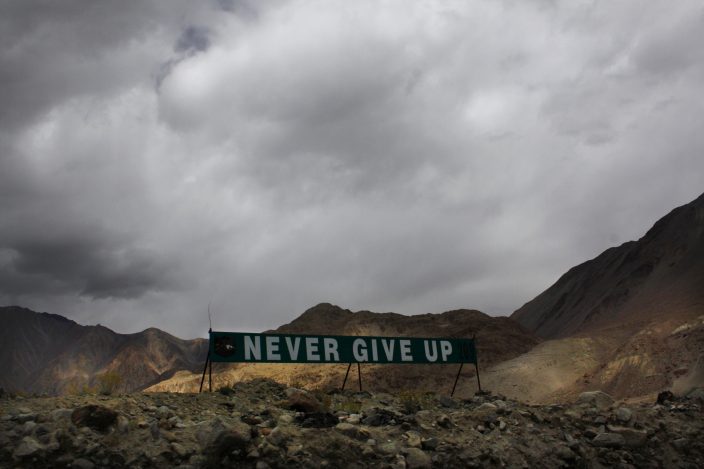 In this Sept. 14, 2017, file photo, a banner erected by the Indian army stands near Pangong Tso lake near the India-China border in India's Ladakh area. India’s defense minister said Thursday, Sept. 17, 2020, the country faces challenges in its border dispute with China and urged Beijing to sincerely implement an understanding they reached previously to completely disengage forces in the Ladakh region. Rajnath Singh said in a statement in the upper house of Parliament that China has amassed troops and armaments in Ladakh in violation of bilateral agreements reached in 1990s and it was creating friction by trying unilaterally to alter the status quo in the region through aggressive postures. (AP PhotoManish Swarup, File)

The two countries' foreign ministers met in Moscow a week ago and agreed to deescalate tensions in Ladakh, but Singh's words to Parliament suggested they have not significantly declined and that settling the impasse will be a long process.

He also said India has counter-deployed troops that have foiled “transgression attempts by China.”

“We should be confident that our armed forces will handle the situation successfully,” Singh said.

He said it was "apparent from Chinese activities that their words don’t match their actions."

In Beijing, Chinese foreign ministry spokesperson Wang Wenbin again laid the onus on India to relieve the tensions and said Chinese border troops have “always strictly abided by the (agreements) between the two countries and are committed to safeguarding China’s territorial sovereignty and maintaining peace and tranquility in the border areas.”

“What is pressing now is that the Indian side should immediately correct its mistake, disengage on the ground as soon as possible and take concrete actions to ease the tension and lower the temperature along the border,” Wang said at a daily briefing.

Relations between the two countries have often been strained, partly due to their undemarcated border.

They fought a border war in 1962 that spilled into Ladakh and ended in an uneasy truce. Since then, troops have guarded the undefined border area, occasionally brawling. The standoff escalated to a deadly clash on a high ridge on June 15 that left 20 Indian soldiers dead.

Singh said India inflicted “heavy” casualties on Chinese forces, but did not provide any numbers. China has not given any details on its casualties.

After that clash, the two countries partially disengaged from the site in the Galwan Valley and at least two other places, but the crisis has continued in at least three other areas, including glacial Pangong Lake.

He said the impasse was due to differing perceptions of the fiercely contested Line of Actual Control that separates Chinese and Indian-held territories from Ladakh in the west to India’s eastern state of Arunachal Pradesh.

Singh said India has doubled its budget on building roads, bridges and other infrastructure along the border to match the Chinese infrastructure to accelerate mobility of forces.

“We are fully prepared to protect the sovereignty and territorial integrity of our country,” he said, adding that China continued to occupy nearly 38,000 square kilometers (14,670 square miles) of Indian land in Ladakh.

Cardinal George Pell, who was conv ...