Ayoub Husseini’s struggle to survive and dream of walking again one day have taken a sudden and cruel turn for the worse.

An Afghan asylum-seeker, he is paralyzed from the waist down but made it to the Greek island of Lesbos in February with the help of his younger brother Iesa. He carries the hope of finding the treatment he needs in Europe.

But the pair, both in their 20s, were left homeless after fires last week destroyed Greece’s largest refugee camp. The site at Moria on the east of the island is infamous for overcrowded and poor living conditions. It housed more than 12,000 people. 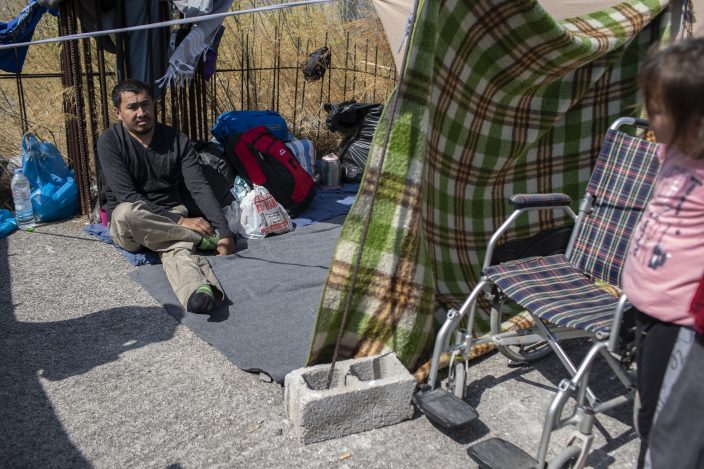 Homeless Afghan refugee Ayoub Husseini, who has lost the use of his legs after a construction accident, sits on a blanket with his belongings on the terrace of a commercial building on the island of Lesbos. Greece, Monday, Sept. 14, 2020. Ayoub who hopes to receive medical treatment for his injuries in Europe, is one of thousands of asylum-seekers left homeless after a fire gutted Moria refugee camp on the island. (AP PhotoPetros Giannakouris)

Ayoub Husseini spends his days propped up in a makeshift wheelchair against the wall on the terrace of an abandoned building, a winter blanket nailed to a post to shade him from temperatures still reaching 30 degrees Celsius (mid-80s Fahrenheit).

A construction accident he suffered in Iran five years ago also left him unable to speak. In a calm and soft-spoken voice, Iesa describes their trip to Greece from Iran that spanned some 3,000 kilometers (1,850 miles).

Parts of the journey were made by bus, and on trucks where they sat among goods being hauled through Turkey. Afghans they met on the road helped carry Ayoub on a folded blanket. Migrants carry their belongings as they flee a road leading from Moria to the capital of Mytilene, on the northeastern island of Lesbos, Greece, Thursday, Sept. 17, 2020. A Greek police operation is underway on the island of Lesbos to move thousands of migrants and refugees left homeless after a fire destroyed their overcrowded camp, into a new facility on the island. (AP PhotoPetros Giannakouris)

They still rely on the kindness of other asylum seekers — mostly fellow Hazaras, a historically persecuted ethnic minority in Afghanistan.

“He needs at least two to three people to help him to go to the toilet or take a shower,” says Iesa Husseini, who spoke in Dari to the Associated Press through an interpreter.

The closest source of clean water is now 3 kilometers (2 miles) away, while hopes of being moved off the island have again been set back.

Migrants carry their belongings as they flee a road leading from Moria to the capital of Mytilene, on the northeastern island of Lesbos, Greece, Thursday, Sept. 17, 2020. A Greek police operation is underway on the island of Lesbos to move thousands of migrants and refugees left homeless after a fire destroyed their overcrowded camp, into a new facility on the island. (AP PhotoPetros Giannakouris)

“They haven’t transferred us. They told us we first need to have an interview (to claim asylum). It was supposed to happen soon, on Oct. 2.”

The Greek army has set up a new camp near Moria, but the rate of transfer has been slowed by the need for strict COVID-19 screening as well as resistance from some migrants who fear they could be detained for years.

The fires at Moria have added urgency to a debate in the European Union which is seeking to overcome divisions among member states and overhaul migration policy, after several years of stalemate, to ease the burden on frontier states like Greece.

It’s some consolation for Iesa and Ayoub Husseini, who keep medical records meticulously stored in plastic binders but who have so far been unable to receive anything beyond basic treatment.

The Supreme Court on Wednesday put ...

Man faces state, federal charges in death of Houston of ...

A man accused of fatally shooting ...