Poland's president, Andrzej Duda, has appointed his 25-year-old daughter, Kinga, to be an unpaid adviser on social issues.

The president stressed on Twitter late Wednesday that his daughter was working as a volunteer and “does not receive any remuneration."

The appointment nonetheless raised some allegations of nepotism by critics of Duda and the ruling right-wing party that backs him, Law and Justice. 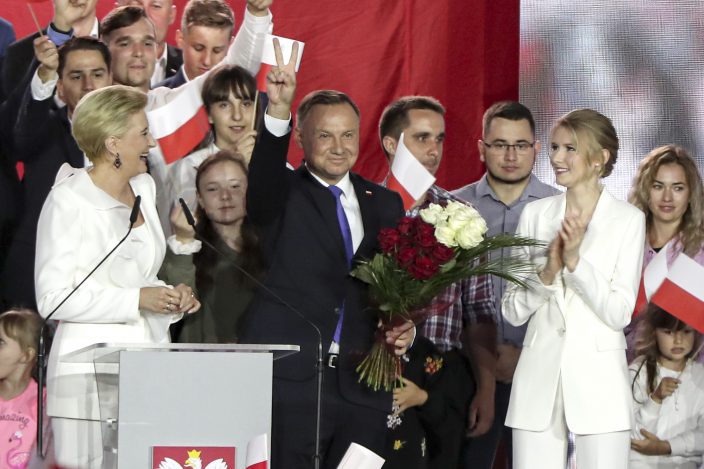 FILE - This Sunday, July 12, 2020 file photo shows Polish President Andrzej Duda flashing a victory sign, joined by with wife Agata Kornhauser-Duda, front left, and daughter Kinga Duda, front right, on the night of his re-election, in Pultusk, Poland. Duda has appointed his 25-year-old daughter as an unpaid adviser on social issues, a move that has triggered accusations of nepotism.(AP PhotoCzarek Sokolowski, File)

Kinga Duda, a lawyer, has already been dubbed by presidential critics as “Poland's Ivanka Trump,” a reference to President Donald Trump's daughter, who plays a key role in the U.S. administration.

Kinga Duda has for the most part not played a visible role in the presidency of her father, who won his first five-year term in 2015 and was re-elected in July.

However she seized the nation's attention with an election night speech in July in which she called for all people in society to be respected despite their differences. It was seen as an attempt to soften her father's image.

During his campaign, Duda spoke out repeatedly against the movement for greater civil rights for lesbians, gays, bisexual and transgender people. He called the LGBT rights movement an “ideology” more dangerous than communism, and said at one point that LGBT people “are not people.”

“Nobody deserves to be hated, absolutely nobody,” she told her father's supporters on election night.

LGBT rights activists say they have seen a sharp rise in the number of hate crimes targeting LGBT people in recent months, and have widely denounced Kinga Duda's appeal as an act of hypocrisy.

The presidential website says she was appointed in August.