Bayern Munich is always the team to beat in Germany. As the European champions, even more so, and Robert Lewandowski knows it.

Lewandowski scored a scarcely believable 55 goals in 47 games last season as Bayern won the Bundesliga, German Cup and Champions League. At 32, he is still a key player, though the team around him looks different with Leroy Sané in and Thiago Alcantara leaving.

“If you play so good in the last season, then everyone is looking at you now and how you will be in the new season," Lewandowski said in the run-up to Friday's season opener. "And if you are on the top you have to work harder to stay longer on the top. And I think so for us that is the big challenge for this season.” 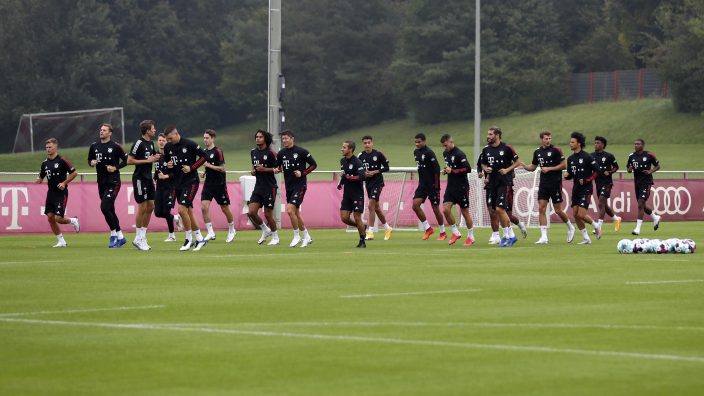 Just like last year, Bayern's main challengers are Leipzig, the only team to stay undefeated against Bayern last season, and Dortmund, whose young stars are rapidly gaining experience and maturity.

Bayern ended up winning the title by 13 points last season, but for most of the campaign it was a much closer battle. The Munich team slipped as low as seventh in December before recovering under coach Hansi Flick to win 19 of its last 20 league games and a record-extending eighth straight Bundesliga title.

Bayern starts Friday at home against Schalke, before Dortmund plays Borussia Mönchengladbach on Saturday and Leipzig hosts Mainz on Sunday. Bayern will follow that with matches against Sevilla in the European Super Cup on Sept. 24 and against Dortmund in the German Super Cup six days later.

After the last campaign finished without fans, a deal between German politicians Tuesday allows supporters back into stadiums for a six-week trial at maximum 20% capacity — with one big exception.

Bayern wanted 7,500 fans on Friday but fell foul of a rule which keeps the stadiums closed if the local coronavirus infection rate climbs too high.

Games with partial crowds have split Germany’s vocal fan groups. Boycotts are rare but many say they won’t take part in any organized displays of support for the team. Social distancing rules kill the atmosphere, some argue, and there’s widespread discontent with the perceived unfairness of barring away fans and allocating the few available tickets by lottery.

With barely four weeks between the Champions League final against Paris Saint-Germain and the start of the new league season, it's hardly surprising that Bayern's squad has changed little.

Forward Leroy Sané is finally eligible to play after joining from Manchester City in July and could make his debut against Schalke, the team he left in 2016. New signings were barred from the Champions League tournament. He will need to find his place in an attack already boasting Lewandowski, Kingsley Coman and Serge Gnabry.

Midfielder Thiago Alcantara left Bayern after seven years for Liverpool on Thursday and likely won't be replaced. Three loan signings have also moved on. Philippe Coutinho is back at Barcelona, with Ivan Perisic returning to Inter Milan and defender Alvaro Odriozola to Real Madrid.

Erling Haaland and Jadon Sancho lit up the Bundesliga last season — Haaland with 13 goals in 15 games and Sancho with 17 goals and 17 assists — but Dortmund's title challenge was once again let down by defensive frailty.

Perhaps surprisingly, Dortmund hasn't bought a center back. However, it has replaced rampaging right back Achraf Hakimi, who was on loan from Real Madrid, by signing the more experienced Thomas Meunier from Paris Saint-Germain.

Sancho is still a Dortmund player — so far — despite a determined attempt by Manchester United to buy him. The transfer window closes on Oct. 5.

Seventeen-year-old English midfielder Jude Bellingham looks like Dortmund's next young sensation after arriving from Birmingham, and scored on his debut in the German Cup on Monday. But there's still a lack of depth at the back, with midfielder Emre Can drafted in at center back for the cup game.

Leipzig's run to the Champions League semifinals was remarkable for a team only founded 11 years earlier, even given energy drink giant Red Bull's financial backing, but it obscured a fundamental weakness for next season.

Without Werner, both of Leipzig's goals in the 2-1 quarterfinal win over Atletico Madrid came from midfielders, and the 3-0 semifinal loss to PSG could have been very different had center forward Yussuf Poulsen not missed a good first-half chance while trailing 1-0.

New signing Hwang Hee-chan started in the center forward role and scored in Leipzig's first game of the new season, a 3-0 win over third-division club Nuremburg in the German Cup. The South Korean is Leipzig's 17th signing since 2012 from Salzburg, Red Bull's Austrian club.

Known for his pace and incisive runs, Hwang is more in Werner's mold, while Poulsen is an old-school center forward known for his heading ability.

Gladbach was the team which surprised everyone last season in the Bundesliga.

During Bayern's blip under former coach Niko Kovac, Gladbach was the early-season leader and eventually secured Champions League qualification by finishing fourth. The pandemic has caused financial strain, though, and on-loan midfielder Valentino Lazaro is the most notable signing.

Bayer Leverkusen, last year's fifth-place finisher, was weakened in attack by selling Kai Havertz to Chelsea and Kevin Volland to Monaco. It has patched the gaps by signing Roma forward Patrik Schick.

Hertha Berlin investor Lars Windhorst's lavish funding hasn't translated to big spending in the off-season. Lucas Tousart is the most notable arrival, though that deal was actually concluded in January.