It's 11 weeks since thousands of citizens of the Czech capital, Prague, sat together at a 500-meter-long table on the medieval Charles Bridge to say goodbye to the coronavirus pandemic and celebrate a return to almost-normal life.

The Central European country was one of the quickest to get the first wave of the virus under control, and began removing restrictions as early as April.

The second wave, though, has hit hard. 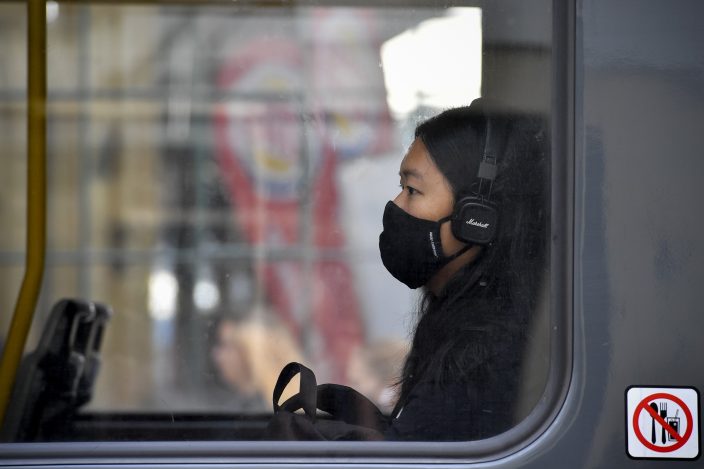 A young woman with face mask is sitting in a tram in Prague, Czech Republic, Thursday, Sept. 17, 2020 The number of new confirmed coronavirus infections have hit a record in the Czech Republic, surpassing 2,000 cases in one day for the first time. (Simanek VitCTKvia AP)

The number of new confirmed cases has been setting records almost on a daily basis. The Health Ministry announced on Thursday that a total of 2,139 positive cases were recorded in the previous 24 hours — more than in the entire month of May and 450 more than the previous record, set the day before.

In recent days and weeks, the day-to-day increase in the Czech Republic has been significantly bigger than in most of its neighbors and similar to that of Germany, which has a population eight times greater. 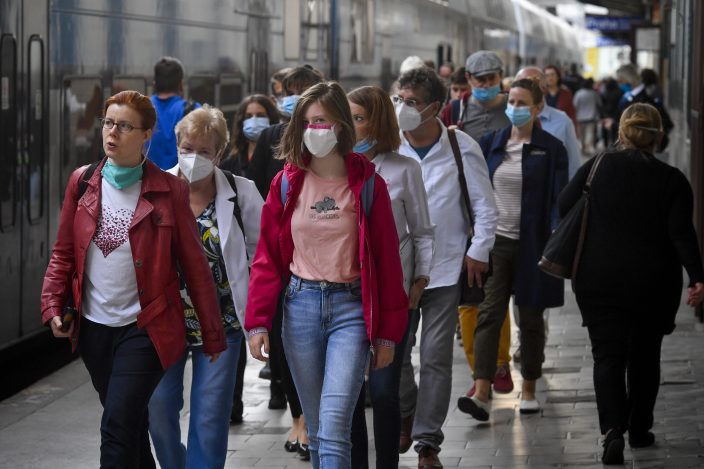 The government on Thursday further tightened its restrictive measures in an effort to contain the surge.

Health Minister Adam Vojtech said all bars, restaurants and night clubs must be closed between midnight and 6 a.m., starting on Saturday. He said the reason for the move is that most of the newly infected people are aged 20-29.

His ministry previously banned more than 10 people from standing in the same indoor space, starting Friday.

If more people are gathering, they must all be seated and wearing masks, and every visitor must have a ticket for a specific seat.

The measure also applies to bars, restaurants and clubs, where the number of visitors cannot be higher than the number of seats. If people stand or move, they have to have a mask.

Also as of Friday, children will have to wear masks in all spaces at school. Dozens of schools have been closed since the beginning of the school year on Sept. 1 after students or teachers became infected, Vojtech said.

“It’s clear that if we don’t adopt more restrictive measures, and if we don’t abide by the current ones, the situation will be serious,” Vojtech said.

The Czech spike has not gone unnoticed. Other European countries, including Slovakia, Denmark, Switzerland and Britain have already imposed travel restrictions on people arriving from the Czech Republic, while Germany did the same for the citizens of Prague and a central Bohemian region.

The capital is the hardest hit part of the country with 154 people infected per 100,000 citizens.

Some of the increase can be attributed to higher levels of testing compared with earlier in the year. The number of people hospitalized with COVID-19 is lower than in the spring. As of Thursday there were 388 people in hospital — 55 more than the previous day — of whom 81 are in serious condition.

To date, the Czech Republic has recorded 41,032 infections, with 482 deaths. For September alone, authorities estimate the number of new COVID-19 cases could be as high as 70,000.

In the first wave, the Czech Republic quickly imposed sweeping restrictions on daily life and became one of the first countries to make the wearing of protective masks obligatory in all public areas.

The measures paid off. Unlike their colleagues in Italy and Spain, Czech hospital doctors didn’t need to make harrowing decisions on which COVID-19 patients would get the best care.

In April, the Czech Republic together with Austria became the first European countries to announce a relaxation of their restrictions.

In summer, as other countries in Europe were making face coverings mandatory, the Czechs stopped using them almost completely.

But the celebrations were premature. In late August, the numbers of infected began to grow again and, that accelerated further after the start of the new school year.

“I am calling on everyone not to underestimate the situation,” Vojtech said.

“The fact is that the situation is not good. The epidemic is gaining strength.”