The House voted Thursday to condemn racism against Asian Americans tied to the coronavirus outbreak, approving a Democratic resolution on a mostly party-line vote. Republicans called the legislation an election-year effort to criticize President Donald Trump and “woke culture on steroids.”

The resolution, approved 243-164, calls on all public officials to condemn anti-Asian sentiment and to investigate hate crimes after a rise in aggression and violence from those blaming people of Asian descent for the pandemic. The measure does not name Trump but notes inflammatory terms used by him and other Republicans — including “Chinese Virus," “Wuhan Virus," and “Kung flu” — and says they have perpetuated an anti-Asian stigma.

House Speaker Nancy Pelosi said that “at the same time that the coronavirus pandemic is broken out, so too has a disturbing epidemic of hate and discrimination” against Asian Americans and Asian immigrants, including physical and verbal attacks and vandalized businesses. She blamed Trump for trying to divert attention from Russia’s meddling in elections to demonize China. 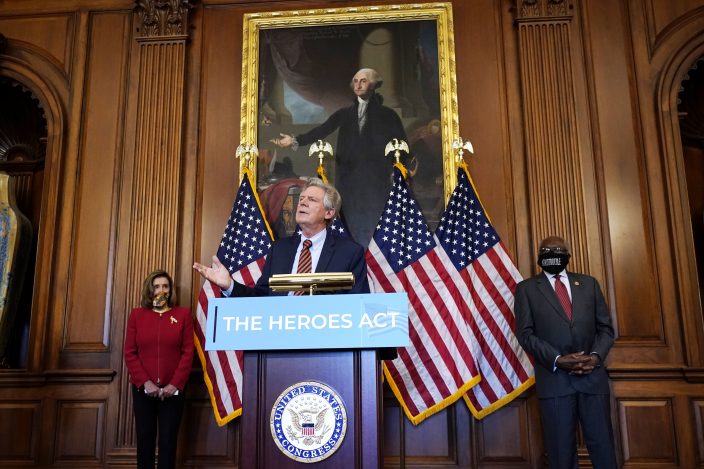 “The president is fueling racism and inspiring violent attacks on Asian Americans and Asian immigrants,” Takano said. Trump has often used the term “kung flu” on the campaign trail as he has tried to turn focus to the virus’s origins in China amid criticism of his response to the pandemic.

Republicans said Trump was turning his ire toward China's government and not Asian Americans. Trump in March insisted that Asian Americans were “amazing people” and not at fault for spreading the virus.

Several House Republicans spoke against the resolution. Ohio Rep. Jim Jordan said it was “just another opportunity to attack the president.” Arizona Rep. Andy Biggs called it “woke culture on steroids.” Republican leader Kevin McCarthy, R-Calif., said it was “ridiculous” and a “waste of time” as the House was about to adjourn for the week and Democrats and the White House have so far failed to agree on additional coronavirus relief.

“At the heart of this resolution is the absurd notion that referring to the virus as a Wuhan virus or the China virus is the same as contributing to violence against Asian Americans, which I will tell you no one on this side of the aisle supports,” McCarthy said.

Anti-discrimination groups have reported hundreds of actions against Asian Americans, especially in the early days of the outbreak. Even before cities began shutting down all restaurants to stop the spread of the virus, Chinese restaurant owners were experiencing steep declines in business because of racial stigma.

Asked in March why he called the coronavirus the “Chinese virus,” Trump told reporters at the White House that he doesn’t consider it a racist remark. “It’s not racist at all,” Trump said, adding that he calls it the “Chinese virus” because he wants to be accurate.

A record surge in coronavirus case ...