Mike McCarthy got the sentimental stuff out of the way before his first home game as coach of the Dallas Cowboys, in the stadium where he won his Super Bowl with Green Bay a decade ago.

After getting hired, McCarthy wanted to know how long the ride was from team headquarters to AT&T Stadium, so he made the trip. Before a glorified practice in Dallas' $1.2 billion home during training camp, McCarthy took himself back in time.

When the Cowboys play Atlanta in a meeting of 0-1 teams Sunday, McCarthy will be thinking about home-field advantage — with a limited number of fans, of course — and other things associated with taking the proud franchise where it hasn't been in the playoffs in 25 years. 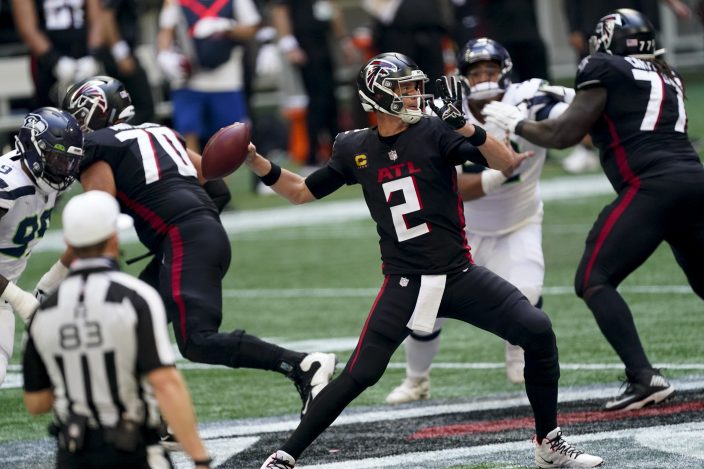 Atlanta Falcons quarterback Matt Ryan (2) works in the pocket against the Seattle Seahawks during the second half of an NFL football game, Sunday, Sept. 13, 2020, in Atlanta. (AP PhotoJohn Bazemore)

“I've had the chance to do the walk down memory lane,” McCarthy said. “I'm really kind of past that and just want to establish ourselves at home this year.”

(For more in-depth coverage of the NFL, listen to the AP Pro Football Podcast apple.co/3iGiX8a)

McCarthy's Dallas debut coincided with the opening of the new stadium in Los Angeles, and the Cowboys lost to the Rams 20-17. The Falcons fell to Seattle 38-25 despite 450 yards passing from Matt Ryan.

Atlanta lost four of its first five games in 2018 and began 1-7 a year ago on the way to a pair of 7-9 finishes. The first 0-2 start in six seasons under Dan Quinn would further cloud the future of a coach who likely needs to make the playoffs to keep his job.

Dak Prescott had a big first half leading the Dallas offense against the Rams, but the Cowboys scored just three second-half points and couldn't produce with a chance to tie or win late. The theme was all-too-familiar after a disappointing 2019, when Dallas was 1-6 in one-score games.

“I take pride in having the ball in my hands late in the game,” Prescott said. “I’m not very proud of the way I’ve handled it and the team has handled it recently. But it’s something I’m sure will change. Everybody has got to embrace that.”

The Cowboys continue to be vague about how many fans will be allowed. Perhaps speaking out of turn, McCarthy volunteered 25% capacity in a stadium with 80,000 permanent seats. Texas Gov. Greg Abbott has authorized up to 50% capacity in stadiums.

Regardless, it will be the first game with fans for both teams. The Falcons didn't allow fans in their opener, same with the Rams at palatial SoFi Stadium.

“I just didn't think it was going to be that quiet," McCarthy said of the LA opener. “We’ll have some live energy in the building. I’m pretty confident the music and the game operations will be a little different than it was this past week.”

Dallas Pro Bowl receiver Amari Cooper suggested the possibility of three 1,000-yard receivers after the Cowboys drafted CeeDee Lamb in the first round to join him and Michael Gallup. The Falcons are off to a much better start in that regard.

The second-most prolific passing game of Ryan's career was most notable because of three receivers surpassing 100 yards. Julio Jones led with 154 yards, followed by Calvin Ridley with 130 and Russell Gage at 114 — each with nine catches.

Gage’s performance was especially encouraging. A sixth-round pick out of LSU in 2018, he is getting a shot to play a much bigger role as the third receiver.

“He’s always been a guy who I thought had a lot of talent,” Ryan said. “You’re always unsure when a guy gets his opportunity, is he going to be able to handle that role and do it week in and week out? He certainly exceeded everyone’s expectations.”

Dallas running back Ezekiel Elliott and Atlanta newcomer Todd Gurley — both top 10 draft picks a year apart — will meet for the fourth time. The first three were when Gurley was with the Rams, including a divisional playoff during the 2018 season.

Gurley leads in yards rushing, 256-249, with Elliott having a slight edge in yards receiving, 116-115. Elliott has five total touchdowns to Gurley's four. Gurley has two wins, including the playoff game when LA reached the Super Bowl.

The Falcons will be looking to tighten up their coverage after Seattle’s Russell Wilson did whatever he pleased in Week 1, completing 31 of 35 passes for 322 yards and four touchdowns.

Most notably, Isaiah Oliver was burned on a fourth-and-short play when DK Metcalf ran by him to haul in a 38-yard touchdown that helped break the game open for the Seahawks.

“It was definitely a technique issue,” Oliver said. “A drop step with my left foot put me behind the receiver immediately. ... You do that with a good receiver and you’re always going to be a couple of yards behind on any route he runs.”

The Falcons’ other starting cornerback is rookie A.J. Terrell, who’ll have his hands full trying to cope with the Dallas trio. Look for the Cowboys to try to exploit Atlanta’s secondary youth.