Peruvian President Martín Vizcarra’s job is on the line Friday as opposition lawmakers push through an impeachment hearing criticized as a hasty and poorly timed ouster attempt in one of the countries hardest hit by the coronavirus pandemic.

Lawmakers appeared to be far short of the two-thirds majority vote required to remove Vizcarra from office, but even if he dodged the impeachment attempt analysts warned that he would not escape the ordeal entirely unscathed.

His ability to carry forward the anti-corruption agenda he has sought to make the hallmark of his short but eventful administration could be further jeopardized if Vizcarra is perceived as having engaged in influence peddling himself. A woman wearing a mask to curb the spread of the new coronavirus waits for food outside the San Francisco de Asis soup kitchen, handing out food for the homeless and poor, in Lima, Peru, Thursday, Sept. 17, 2020. (AP PhotoRodrigo Abd)

“His credibility in carrying through that agenda is already problematic,” said Jo-Marie Burt, a senior fellow with the Washington Office on Latin America. “This really hangs in the balance.”

The political turmoil rocking Peru has briefly distracted attention from one of the world’s worst coronavirus outbreaks and involves a cast of characters that could easily fit into a soap opera.

At the center of the ordeal is Vizcarra’s relationship with a little-known musician known as Richard Swing and nearly $50,000 in questionable contracts that he was given by the Ministry of Culture for activities like motivational speaking. 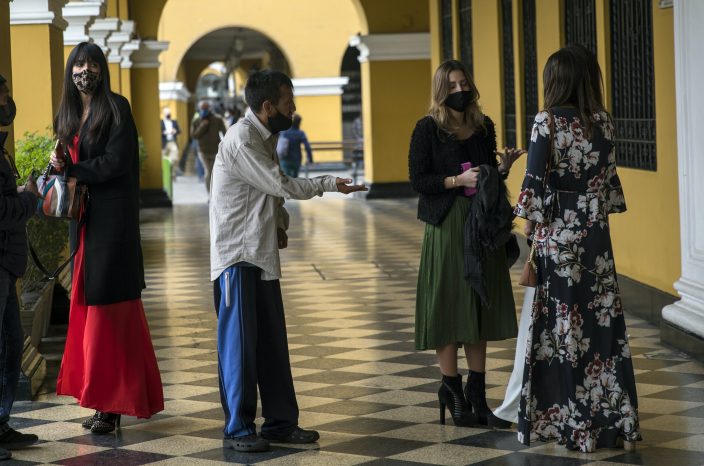 A beggar approaches a group of women wearing maks to curb the spread of the new coronavirus, as they were leaving a wedding ceremony near the Presidential Palace in Lima, Peru, Thursday, Sept. 17, 2020. (AP PhotoRodrigo Abd)

A covert audio recording shared by Edgar Alarcón — a lawmaker himself charged with embezzlement — appears to show Vizcarra coordinating a defense strategy with two aides, trying to get their stories straight on how many times the musician had visited him.

Vizcarra insists no illegal activity took place and he has not been charged.

Though Vizcarra is entitled to speak to Congress in his own defense, it was widely expected that he would be represented by an attorney. But while analysts have criticized the rushed procedure in which the impeachment proceeding was initiated within hours of the audio’s release, many agreed that the president owed Peruvians an explanation. 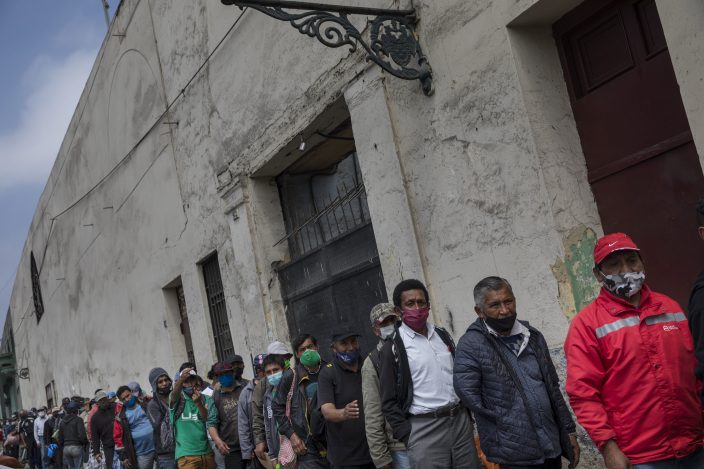 People wearing masks to curb the spread of the new coronavirus wait for food outside the San Francisco de Asis soup kitchen which is handing out food for the homeless and poor in Lima, Peru, Thursday, Sept. 17, 2020. (AP PhotoRodrigo Abd)

“The best thing the president could do is go to Congress, explain the audios and go hibernate,” said Alonso Cárdenas, a politics professor at the Antonio Ruíz de Montoya university in Lima. “Let his ministers take the spotlight until his government is up.”

Vizcarra became president in 2018 after Pedro Pablo Kuczynski resigned the presidency under pressure by Congress after the discovery of about $782,000 in undisclosed payments to his private consulting firm by Brazilian construction giant Odebrecht, which is at the center of a regionwide corruption scandal.

Odebrecht has admitted to paying some $800 million in bribes to officials across Latin America, and nearly every living former Peruvian president has been implicated in the scandal. 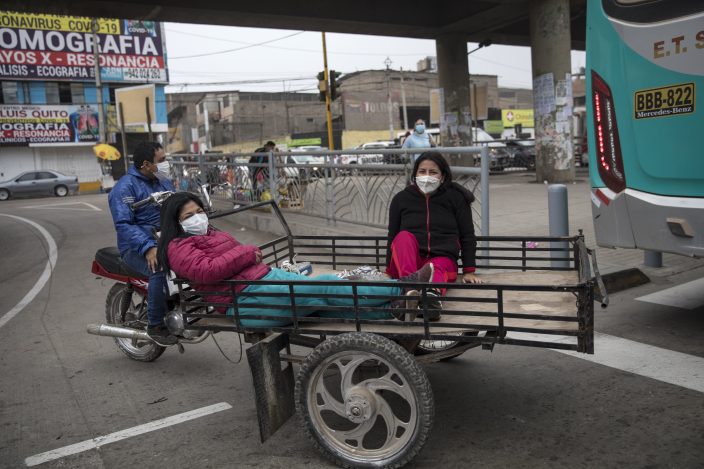 Commuters sit on the flatbed of a motorbike that will take them to work in Villa el Salvador, on the outskirts of Lima, Peru, Tuesday, Sept. 15, 2020. (AP PhotoRodrigo Abd)

Vizcarra, at the time a vice president serving as Peru’s ambassador to Colombia, is an engineer by training and was considered an unknown political novice. But he has managed to become a highly popular president, recently getting a 57% approval rating in a poll despite Peru’s severe economic fallout from the COVID-19 crisis and the high infection rate.

Many Peruvians see him as a frank-talking leader who has taken on corruption, dismissing Congress last year in a brash move cheered by citizens as a victory against a dishonest class of politicians and pushing through initiatives to reform how judges are chosen and bar politicians charged with crimes from running for office.

“He’s the only president who — without a lot of power — has faced off against those shameless people,” said Pedro Quispe, a retired teacher out selling face masks on a recent day.

Steve Levitsky, a Harvard University political scientist, said Vizcarra has made “some modest steps forward” when it comes to corruption.

“He hasn’t been able to carry out all the political reform that he and his allies hope to,” Levitsky said. “But corruption in middle income countries is never eliminated in a single presidency.”

Vizcarra tried to halt the impeachment by filing a lawsuit with the Constitutional Tribunal, but magistrates ruled Thursday that the process could proceed, under the belief that lawmakers would not actually be able to oust him.

To what degree the current scandal could nonetheless taint the seven months he has left in office remains to be seen. The president has no majority in Congress, a pandemic still to deal with and an economic contraction that has put millions into poverty.

His presidency, it appears, will be book-ended by crises.

“He is very isolated, very alone,” Burt said. “I really don’t think anyone is winning in this situation.”