NEW DELHI — India’s coronavirus cases have jumped by another 96,424 infections in the past 24 hours, showing little signs of slowing down.

The Health Ministry on Friday raised the nation’s confirmed total since the pandemic began to more than 5.21 million. It said 1,174 more people died in the past 24 hours, for a total of 84,372.

India is expected within weeks to surpass the reported infections seen in the United States, where more than 6.67 million people have been reported infected, the most in the world. 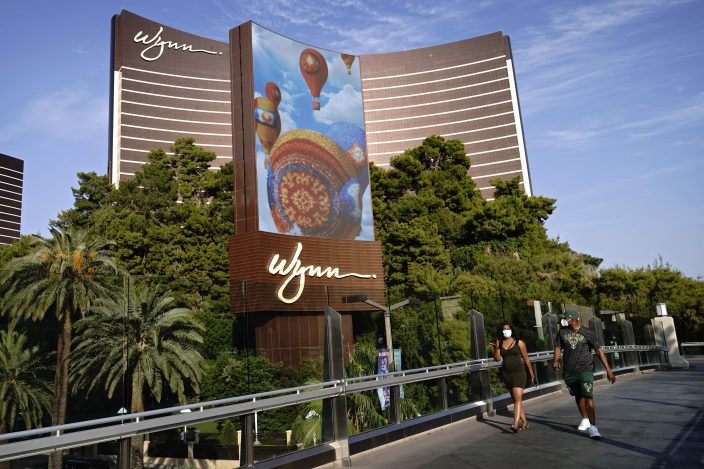 People walk along a pedestrian bridge near the Wynn Las Vegas hotel-casino Thursday, Sept. 17, 2020, in Las Vegas. Wynn Resorts said Thursday that it tallied 548 positive tests for COVID-19 among its 12,000 employees since May, and three workers have died. (AP PhotoJohn Locher)

India’s Prime Minister Narendra Modi on Thursday made a fresh appeal to people to use face masks and maintain social distance as his government chalked out plans to handle big congregations expected during a major Hindu festival season beginning next month. 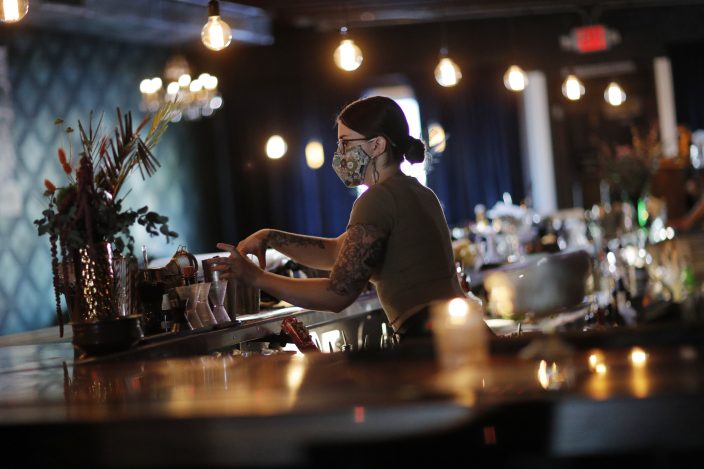 FILE - In this July 10, 2020, file photo, Alanna McDonnell mixes drinks at Velveteen Rabbit, a cocktail bar in the Las Vegas Arts District in Las Vegas. Bars in and around Las Vegas can reopen after this weekend with limited capacity, distance between customers and facial coverings all around, officials announced Thursday, Sept. 17, 2020. (AP PhotoJohn Locher, File)

— Bars in and around Las Vegas will be allowed to reopen

— Report: Much needs doing to shield nursing homes from virus

UNITED NATIONS — U.N. World Food Program chief David Beasley is warning that 270 million people are “marching toward the brink of starvation” because of the toxic combination of conflict, climate change and the COVID-19 pandemic.

Beasley on Thursday urged donor nations and billionaires to contribute $4.9 billion to feed the 30 million he said will die without U.N. assistance.

He reminded the U.N. Security Council of his warning five months ago that “the world stood on the brink of a hunger pandemic,” and welcomed the response, which averted famine and led countries to fight back against the coronavirus.

Beasley said the U.N. food agency is keeping people alive “and avoiding a humanitarian catastrophe” but he said “the fight is far, far, far from over.”

WELLINGTON, New Zealand — New Zealand has reported no new confirmed cases of the coronavirus for the first time in more than five weeks as hopes rise that an outbreak discovered in Auckland last month has been stamped out.

Friday’s report also marked the fourth consecutive day without any cases of community transmission. All recent cases have been found among quarantined travelers returning from abroad.

Authorities have still not pinpointed the origin of the August outbreak, which they believe was imported. Auckland was temporarily placed into lockdown as the country continued its strategy of trying to completely eliminate community spread of the virus.

New Zealand has reported a total of just over 1,800 cases and 25 deaths.

Thirteen of the cases reported Friday were in the northern province of Shaanxi, whose capital Xi’an is a major industrial center. The eastern financial and business hub of Shanghai reported 12.

China has gone more than a month without reporting any cases of locally transmitted coronavirus cases within its borders.

But it remains highly vigilant for cases brought in from outside the country. It has suspended issuing new visas and anyone arriving from abroad is required to undergo a two-week quarantine.

The Korea Disease Control and Prevention Agency said Friday that the 126 confirmed cased added in the past 24 hours took the country’s reported total since the pandemic began to 22,783, with 377 deaths.

The agency says 82 of the newly reported cases were from the Seoul metropolitan area, which has been at the center of the viral resurgence since early last month.

SACRAMENTO, Calif. — California companies must pay workers compensation benefits to any employees that become infected with the coronavirus and they must warn employees of any potential exposure to the virus under two laws that Gov. Gavin Newsom signed Thursday.

Business groups have criticized the measures as “unworkable.”

The law on informing employees requires that businesses tell workers whenever they they have been exposed to someone who has either tested positive, been ordered to isolate or died because of the virus. Companies must do so within one business day of learning of the exposures or they can face fines issued by the Division of Occupational Safety and Health.

LAS VEGAS — Bars in and around Las Vegas can reopen at midnight Sunday with limited capacity, while requiring customers to use facial coverings and obey social distance rules.

The moves relieved a hot-button issue and relaxed the last of the bar closure orders that Gov. Steve Sisolak re-imposed more than two months ago to limit gatherings where alcohol is served in the state’s coronavirus pandemic hot spot areas.

Taverns, bars, breweries, distilleries and wineries were allowed to reopen earlier this week in the Reno area.

Bills return starters at practice in preparing to host ...

AP source: Jaguars' Meyer has no plans to return t ...

Elizabeth Holmes gets emotional under fire by prosecuto ...