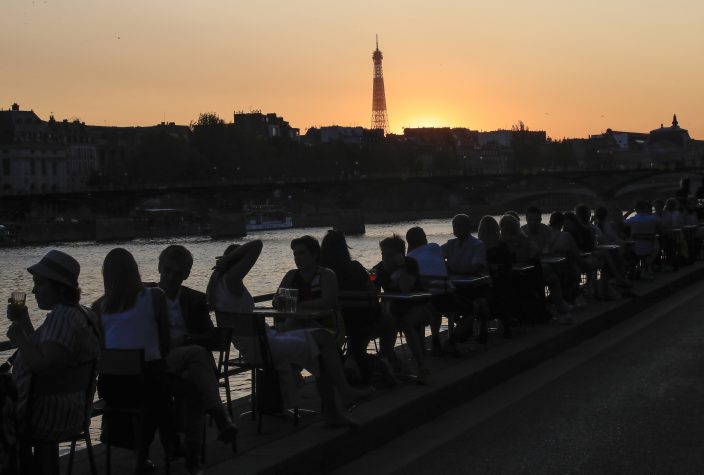 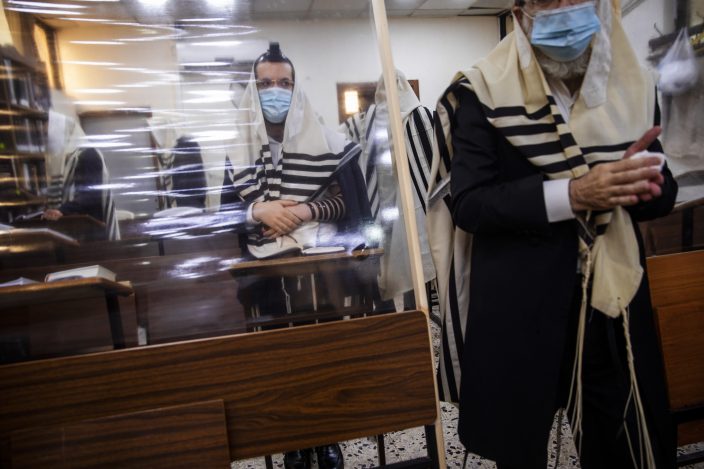 Ultra-Orthodox Jews wearing face masks during a morning prayer in a synagogue separated by plastic partitions, follow new government measures to help stop the spread of the coronavirus, in Bnei Brak, Israel, Friday, Sept 18, 2020. Israel is set to go back into a three-week lockdown later Friday to try to contain a coronavirus outbreak that has steadily worsened for months as its government has been plagued by indecision and infighting. (AP PhotoOded Balilty)

ELECTION 2020-MINNESOTA — Donald Trump almost won Minnesota in 2016 and sees it as a state he can peel away from Joe Biden in November. But Minnesota has steadily moved farther away from the president since then, and polls suggest Biden has built a consistent lead as both he and Trump visit Friday. By Will Weissert and Kathleen Hennessey. SENT: 800 words, photos, video.

ELECTION 2020-BIDEN — Biden derides Trump for his handling of COVID-19, calling his downplaying of the pandemic “criminal” and his administration “totally irresponsible.” Biden spoke at an unusual event: a drive-in of 35 cars near his Pennsylvania hometown of Scranton. By Alexandra Jaffe, Lisa Mascaro and Will Weissert. SENT: 940 words, photos.

VIRUS-OUTBREAK-EUROPE-UNIVERSITIES — Can mandatory masks offer enough protection in lecture halls so packed that late arrivals have to sit on the floor? That’s what worries many students at the centuries-old Sorbonne University in Paris as the coronavirus is on the rebound across France. By Sylvie Corbet and Danica Kirka. SENT: 950 words, photos.

THAILAND-PROTESTS — A two-day rally planned this weekend is jangling nerves in Bangkok, with apprehension about how far student demonstrators will go in pushing demands for reform of Thailand’s monarchy and how the authorities might react. By Tassanee Vejpongsa. SENT: 670 words, photos.

LOUISIANA POLICE DEATH-FEDERAL PROBE — Graphic photos that surfaced online this week appear to show deep bruises on the face of a Black man who died following a police chase in Louisiana last year, raising new questions about whether his injuries were caused by the crash that ended the chase or an ensuing struggle with state troopers. By Jim Mustian. SENT: 800 words, photos.

OBIT-WINSTON-GROOM — Winston Groom, the writer whose novel “Forrest Gump” was made into a six-Oscar winning 1994 movie that became a soaring pop cultural phenomenon, has died at age 77. SENT: 730 words, photos.

VIRUS OUTBREAK-ISRAEL — Israel is set to go back into a full lockdown to try to contain a coronavirus outbreak that has steadily worsened for months as its government has been plagued by indecision and infighting. SENT: 520 words, photos.

VIRUS-OUTBREAK-ASIA — India’s coronavirus cases jump by another 96,424 infections in the past 24 hours, showing little sign of leveling. SENT: 650 words, photos. With VIRUS-OUTBREAK-THE-LATEST.

VIRUS-OUTBREAK-CONFLICT-AND-FAMINE — The World Food Program chief warns that millions of people are closer to starvation because of the deadly combination of conflict, climate change and the COVID-19 pandemic and he urges donor nations and billionaires to help feed them and ensure their survival. SENT: 460 words, photos.

TROPICAL-WEATHER — Rescuers on the Gulf Coast used boats and high-water vehicles to reach people cut off by floodwaters in the aftermath of Hurricane Sally, even as a second round of flooding took shape along rivers and creeks swollen by the storm’s heavy rains. SENT: 990 words, photos, video.

AFGHANISTAN-THREATS — The U.S. Embassy in Afghanistan warns that extremists groups are planning attacks against a “variety of targets” but are taking particular aim at women. SENT: 700 words, photos.

PERU-POLITICAL-CRISIS — Peruvian President Martín Vizcarra’s job is on the line as opposition lawmakers push through an impeachment hearing criticized as a hasty and poorly timed ouster attempt in one of the countries hardest hit by the coronavirus pandemic. SENT: 740 words, photos.

FINANCIAL MARKETS — Asian shares were mostly higher despite some investor attention shifting again to the uncertainties in global economies amid the coronavirus pandemic, as reflected in the overnight fall on Wall Street. By Business Writer Yuri Kageyama. SENT: 570 words, photos.