Fresh restrictions on social gatherings in England, potentially involving limiting pub opening hours, appear to be on the cards soon as the British government seeks to suppress a sharp spike in new coronavirus infections.

British Health Secretary Matt Hancock said Friday that the country has to “come together” over the coming weeks to get on top of the spike, which he noted is leading to a doubling in the number of people being hospitalized with the virus every seven to eight days.

“We want to avoid a national lockdown altogether, that is the last line of defense,” he told BBC radio. “It is not the proposal that’s on the table.” 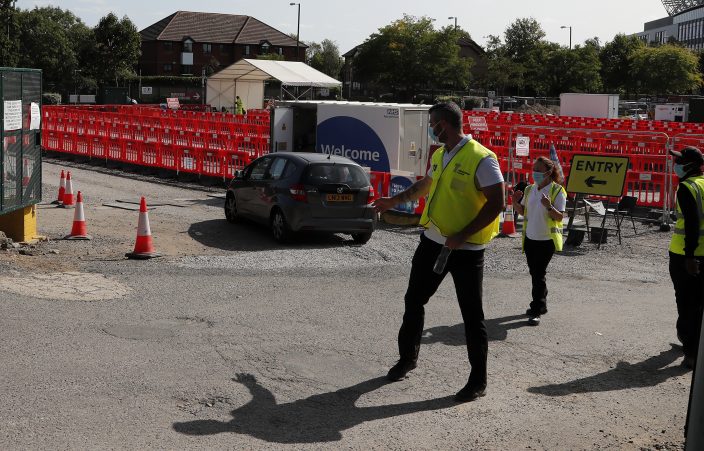 Staff members direct a car to empty lanes of a Covid-19 drive thru testing facility at Twickenham stadium in London, Thursday, Sept. 17, 2020. Britain has imposed tougher restrictions on people and businesses in parts of northeastern England on Thursday as the nation attempts to stem the spread of COVID-19, although some testing facilities remain under-utilised. (AP PhotoFrank Augstein)

Following days of criticism over its testing strategy, there is mounting speculation that the government will announce fresh curbs on the hospitality sector, such as pubs and restaurants, potentially involving curfews — something that has already been put in place in areas that are already under lockdown restrictions.

According to the BBC, the British government's chief scientific adviser and medical officer warned of another serious coronavirus outbreak and many more deaths by the end of October if there were no further interventions. Possible measures are said to include asking some hospitality businesses to close, or limiting opening hours.

The testing that is being conducted has already seen a sharp increase in cases over the past couple of weeks that have raised fears that the country with Europe's deadliest coronavirus outbreak may be in for a second wave during the winter. Critics say it has lost control of the virus and that’s why new measures are being introduced.

Already this week, a ban on social gatherings of more than six people, including children, has come into effect for England. The other nations of the U.K. — Scotland, Wales and Northern Ireland — have announced similar clampdowns on meetings.

Tougher restrictions on people and businesses in parts of northeastern England have also been announced, and there is speculation that an area in northwest England will see fresh curbs on Friday.

The latest daily figures show that another 3,395 new confirmed cases were reported. That down on the previous day’s 3,991, the seven-day average is around double the level a couple of weeks back.

As the experience of the pandemic has shown, there's usually a lag of a week or two between a rise in cases and hospitalizations and then a subsequent lag for deaths.

It's clear that the increase in cases is leading to a higher number of people requiring acute care. The number of patients being treated for the disease in hospitals in England increased to 894 on Wednesday, up from 472 on Sept. 1, according to the latest government statistics. The number of hospitalized patients on ventilators rose to 107 from 59 in the same period.

The worry is that deaths will start to increase markedly in the days and weeks ahead. Though the U.K. is recording far fewer deaths on a daily basis than it did earlier this year, it still registered another 21 on Thursday, taking the total of those having died 28 days after testing positive for COVID-10 to 41,705.

“This is a big moment for the country," Hancock said. “We are seeing an acceleration in the number of cases and we are also seeing that the number of people hospitalized with coronavirus is doubling every eight days.”

The government's strategy over the coming weeks, he said, is to contain the virus down as much as is possible whilst ensuring schools and workplaces remain open.

"And doing everything we possibly can for the cavalry that’s on the horizon of the vaccine and mass testing, and the treatments that, frankly, this country has done more than any other around the world to develop,” he said.

Solskjaer happy to bide his time with Van De Beek at Un ...