Solskjaer said United tried to prevent the 18-year-old Greenwood from joining up with England, believing he needed some rest after his breakthrough season.

While on national team duty, Greenwood was put in front of the media for his first major public news conference, made his debut a few days later in Iceland, and then was dropped from the squad for breaching coronavirus rules by meeting up with women from outside the team bubble. 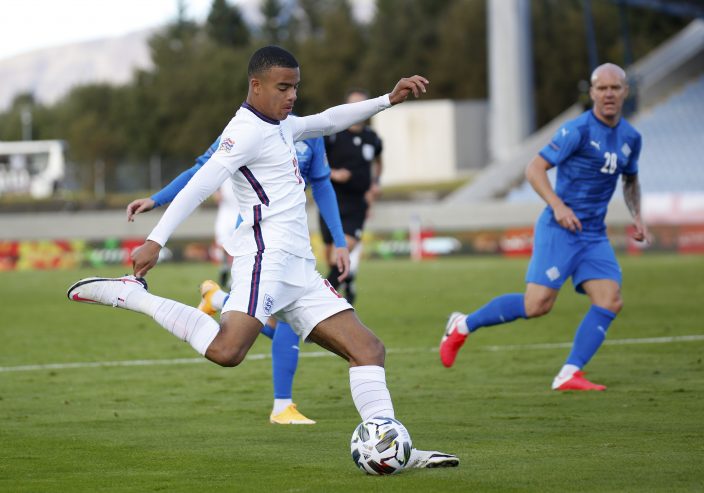 England's Mason Greenwood takes a shot during the UEFA Nations League soccer match between Iceland and England in Reykjavik, Iceland, Saturday, Sept. 5, 2020. England players Phil Foden and Mason Greenwood have been dropped for Tuesday's game against Denmark after breaching coronavirus rules in Iceland. They will return to England from Reykjavik rather than traveling to Copenhagen on Monday Sept. 7, 2020, after social media video was published in Iceland purporting to show the players meeting women from outside the team bubble. (AP PhotoBrynjar Gunnarson)

Greenwood was forced to train alone at United upon his return to England before being reintegrated to the squad, and Solskjaer said his young player’s offseason has been far from ideal.

“As a club, we asked specifically and pointed out that he should have had a rest. He needs it mentally and physically after the season he has had,” Solskjaer said. "First thing that happens is he is called up and he's right there in front of the press.

“We have done whatever we can to protect him. And I will keep on helping him. I know that when he comes back into the daily routine of the club, what we do to him will be fine.”

Pressed on Greenwood, one of the most highly rated young players in England, Solskjaer said United's plan to bring him through slowly “worked really well” but that it was clear he needed a break instead of linking up with England.

“I look at the interview he did for the FA for his first national team game — he is talking about maybe looking back at this season when it is over. And that was the first day of the new season,” Solskjaer said. “There is an 18-year-old kid there who needs managing.”

Solskjaer has also had to deal with the fallout of United captain Harry Maguire getting arrested and being given a suspended 21-month sentence last month for assaulting a police officer, swearing, resisting arrest and attempted bribery during an incident on the Greek island of Mykonos in the offseason.

Maguire has since filed an appeal against his conviction and will get a retrial in a more senior court on a date yet to be announced.

Solskjaer has retained Maguire as the team’s captain but acknowledged Friday he is unsure what the defender's mindset will be once the Premier League season starts. United begins its campaign at home against Crystal Palace on Saturday.

"Knowing Harry, he is a very strong character so hopefully he can put that (to one side) but naturally as a human being, it will be in the back of his mind what happened this summer," Solskjaer said. “You've just got to see how it develops with Harry. Personally I think he will be able to focus on his football. But then again, you can't predict how people will react.”