France on Friday backed Cyprus' calls for the European Union to consider imposing tougher sanctions on Turkey if the Turkish government won't suspend its search for energy reserves in eastern Mediterranean waters where Cyprus and Greece claim exclusive economic rights.

French Minister for European Affairs Clement Baume said sanctions should be among the options the 27-member bloc considers employing if Turkey continues to “endanger the security and sovereignty of a member state.”

“We believe that the European Union must be ready to activate...all available tools and certainly to resort to sanctions, if developments don't proceed in a positive direction," Baume said after talks with Cypriot Foreign Minister Nikos Christodoulides in Nicosia. 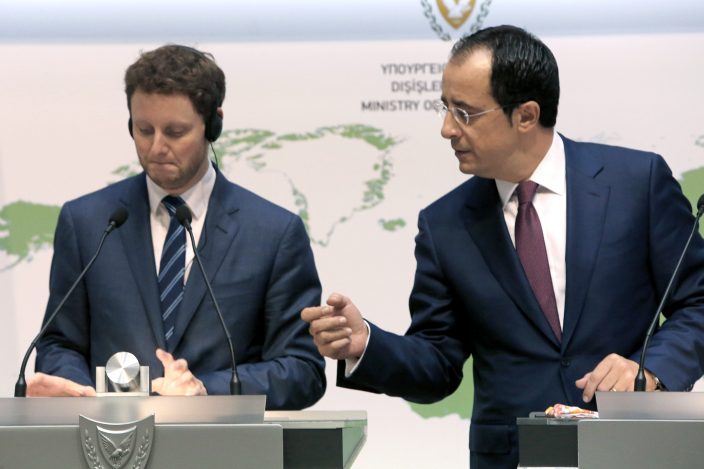 EU leaders are set to hold a summit in a few days to discuss how to respond to Turkey's refusal to recall a warship-escorted research vessel it dispatched to a part of the eastern Mediterranean that Greece maintains is over its continental shelf. The dispute has ratcheted up military tensions between the two NATO allies.

The tensions appeared to ease in the last week, with Greek and Turkish officials having contact after Turkey temporarily pulled back the research vessel. But Ankara extended its gas search in waters southeast of Cyprus until mid-October.

Turkey doesn’t recognize ethnically divided Cyprus as a state and insists it have every right to prospect for hydrocarbons in the eastern Mediterranean. It has vowed vowed do defend its rightful claims to the region’s energy reserves, as well as those of breakaway Turkish Cypriots.

Cypriot officials insist the EU shouldn't set a “double standard" by imposing sanctions against Belarus for alleged voter fraud and police brutality while avoiding doing so when Turkey carries on its exploration at the expense of EU members.

Beaume said the EU cannot accept Turkish actions and that France has “committed" to resolving the issue while making its military presence felt in the eastern Mediterranean in support of its EU partners.