Less than two weeks after getting defaulted from the U.S. Open, Novak Djokovic lost his cool again midway through a 6-3, 4-6, 6-3 win over German qualifier Dominik Koepfer in the Italian Open quarterfinals Saturday.

When Djokovic was broken at love to even the second set at 3-3, he slammed his racket to the red clay in anger.

With the frame broken and the strings all mangled, Djokovic was forced to get a new racket and received a warning from the chair umpire. 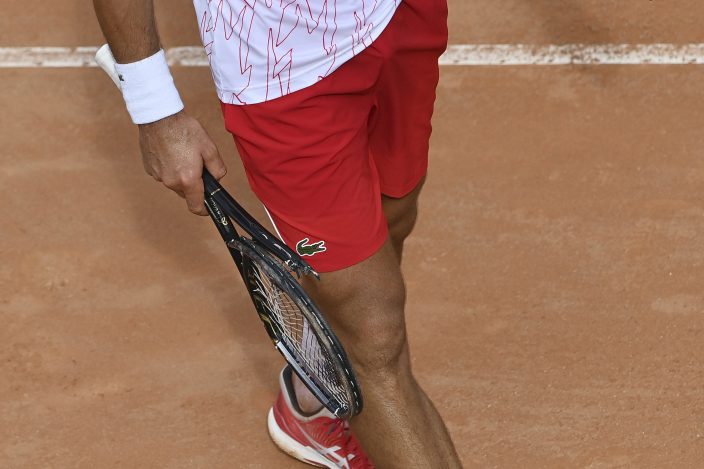 Serbia's Novak Djokovic walks to change his broken racket during is match with Germany's Dominik Koepfer during their quarterfinals at the Italian Open tennis tournament, in Rome, Saturday, Sept. 19, 2020. (Alfredo FalconeLaPresse via AP)

Djokovic had already appeared frustrated the previous game, when he glared toward the umpire following a couple of overrules and a point that was ordered to be replayed.

The top-ranked Djokovic had said Monday that he learned “a big lesson” after he was thrown out of the U.S. Open for unintentionally hitting a line judge in the throat with a ball in a fit of anger. Djokovic also acknowledged then “that I have outbursts and this is kind of the personality and the player that I have always been.”

The 97th-ranked Koepfer, who screamed at himself in frustration throughout the match, was also warned for misbehavior early in the third set. 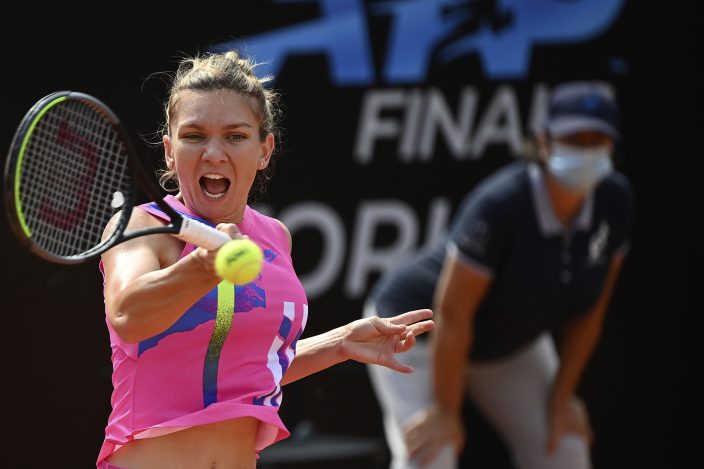 Simona Halep returns the ball to Yulia Putintseva during their quarterfinal match at the Italian Open tennis tournament, in Rome, Saturday, Sept. 19, 2020. (Alfredo FalconeLaPresse via AP)

Aiming for his fifth title in Rome, Djokovic's semifinal opponent will be Casper Ruud, who eliminated local favorite Matteo Berrettini 4-6, 6-3, 7-6 (5) in a match that lasted 2 hours, 57 minutes.

Nine-time Rome champion Rafael Nadal was playing Diego Schwartzman later in the other half of the draw.

Ruud is the first Norwegian to reach the semifinals of a Masters 1000 tournament. His father, Christian Ruud, got as far as the quarterfinals of the Monte Carlo Masters in 1997. While fans have not been admitted to the tournament yet -- Italy’s sports minister said Friday that 1,000 spectators will be allowed in for the semifinals and finals -- workers, family members and other onlookers inside the picturesque Pietrangeli stadium provided some support for Berrettini, who is from Rome.

Nicola Pietrangeli, the 1957 and 1961 Rome champion and the man the stadium is named after -- was also among those sitting on the white marble stands.

“There would have been a lot more adrenaline with fans,” Berrettini said. 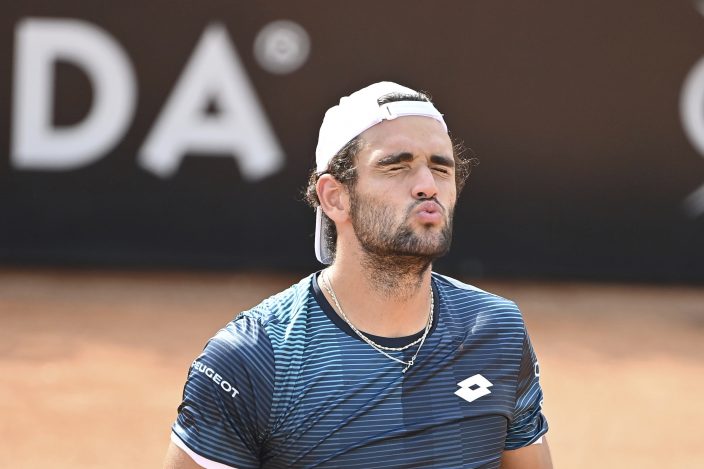 Matteo Berettini reacts during his match with Casper Ruud during their quarterfinal match at the Italian Open tennis tournament, in Rome, Saturday, Sept. 19, 2020. (Alfredo FalconeLaPresse via AP)

In the women's tournament, top-seeded Simona Halep reached the last four when Kazakh opponent Yulia Putintseva retired midway through their match due to a lower back injury.

Halep, who lost two straight finals in Rome to Elina Svitolina in 2017 and 2018, will need to beat two-time Grand Slam winner Garbiñe Muguruza or U.S. Open runner-up Victoria Azarenka to return to the championship match.

“Azarenka is full of confidence because she played really well in U.S. She was amazing. And Muguruza, as well, she feels really well on (the) clay court and here. It’s a big challenge,” Halep said. 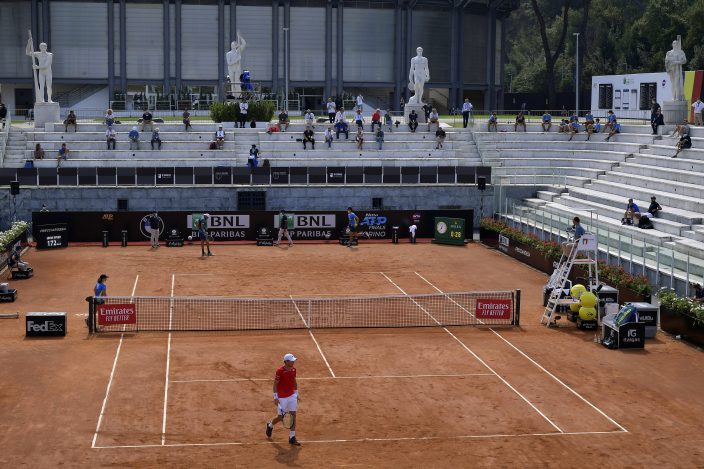 “I really want to win this tournament,” added Halep, who will be playing her fifth semifinal in Rome. “I love playing here. ... It’s one of the biggest goals now.”

Halep was ahead 6-2, 2-0 when Putintseva decided she was in too much pain to continue -- having already taken an off-court medical timeout between sets.

The 30th-ranked Putintseva was coming off two long three-set matches, having upset eighth-seeded Petra Martic and 10th-seeded Elena Rybakina. Entering the match, she had been on court for 7 hours, 22 minutes -- far more than Halep, who had a bye in the opening round and won her next two matches in straight sets.

Putintseva also reached the U.S. Open quarterfinals in her previous tournament, while Halep decided to skip the event in New York due to coronavirus travel concerns.

Halep improved to 8-0 since the tennis restart and 12-0 overall stretching back to February.

Germany on new path as Scholz replaces Merkel as chance ...

Australia joins US in diplomatic boycott of Beijing Gam ...

Khaira stretched off as Blackhawks lose to red-hot Rang ...