Justice Ruth Bader Ginsburg's death has left the Supreme Court shorthanded during a polarizing presidential campaign in which President Donald Trump has already suggested he may not accept the outcome and the court could be called on to step in and decide the fate of the nation.

It's the second time in four years that a justice has died during an election year, though that eight-justice court was not asked to referee any election disputes in 2016. Today, both sides have armies of lawyers ready to take the outcome to court.

The Supreme Court’s role, then, could be vital in deciding a contested election, as it was in 2000 when its 5-4 ruling effectively handed the presidential election to Republican George W. Bush. 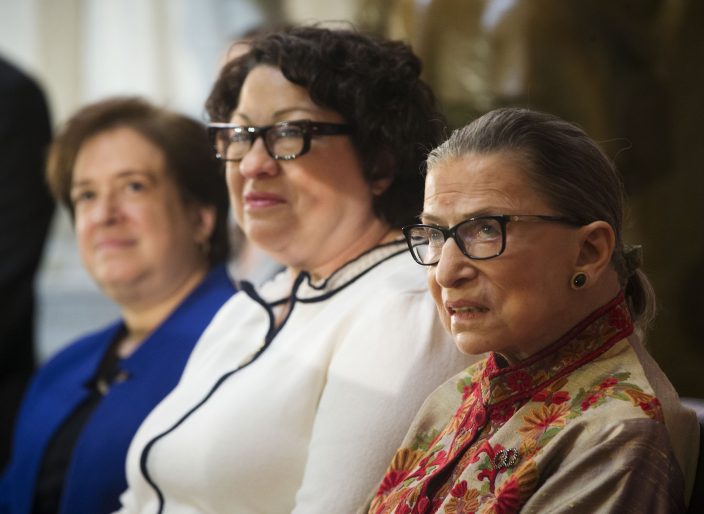 Just moments after Ginsburg's death the prospect of a disputed election and the role of the court in deciding it was already causing anxiety across the political spectrum.

But the makeup of the court is significantly different today from what it was after Justice Antonin Scalia died suddenly in February 2016.

Conservative, Republican-appointed justices hold five of the eight seats, including Chief Justice John Roberts, who is closest to the center of the court on many issues. Liberals appointed by Democrats have the other three. 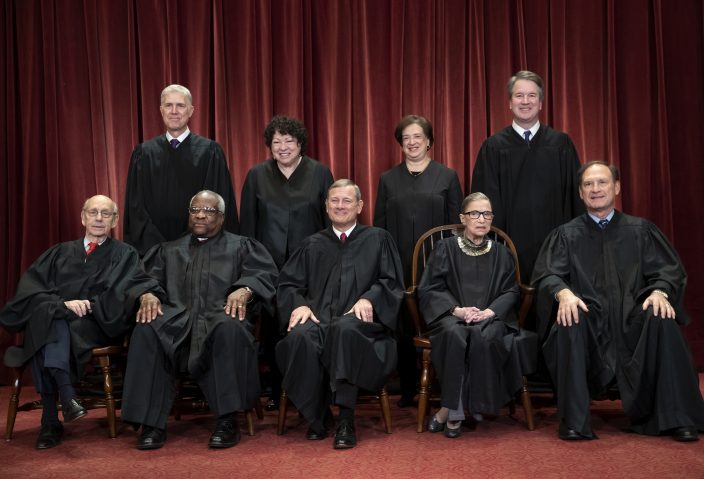 In 2016, Scalia's death left the court evenly divided between four conservatives and four liberals, and it took at least one justice to cross over, in essence, to form a majority on the court.

Any time the justices divide 4-4 in a case, the lower court ruling remains in place. If say, the court were to split that way in a case involving the election, the tie would ratify whatever the lower court decided.

Trump said Saturday he has an “obligation” to fill the seat “without delay,” and Senate Majority Leader Mitch McConnell, R-Ky., is promising to give Trump's nominee a prompt vote in the GOP-controlled chamber. Last time, the court was down one justice for more than a year, when McConnell and the Republicans refused to act on President Barack Obama’s nomination of Judge Merrick Garland. 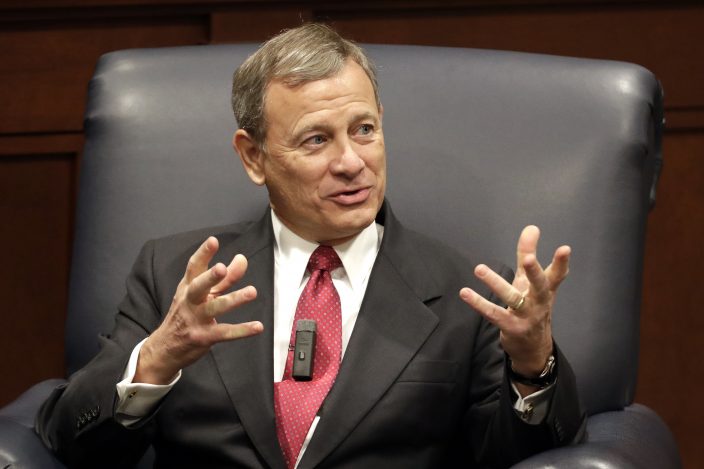 University of Kentucky law professor Joshua Douglas, who worried in 2016 about what he called a nightmare 4-4 election case outcome at the Supreme Court, said it would be worse in 2020 if Trump and McConnell move quickly to fill the seat and the election results wind up in court.

“To me, the scarier prospect is having a 5-4 decision on a presidential election where the swing vote comes from a new justice,” appointed by the candidate who would get another four years in the White House as a result, Douglas said. He said the majority in such a case also likely would include two other justices appointed by Trump, Neil Gorsuch and Brett Kavanaugh.

In 2016, “the court actually did a pretty good job when the court had eight justices for a while. It didn’t have the kind of nightmare 4-4 decision on an issue that affects the country,” he said. 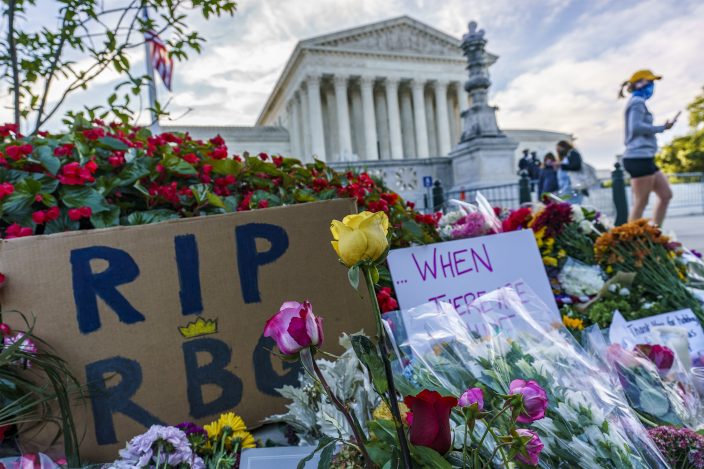 People gather at the Supreme Court on the morning after the death of Justice Ruth Bader Ginsburg, 87, Saturday, Sept. 19, 2020 in Washington. (AP PhotoJ. Scott Applewhite)

Republican Sen. Ted Cruz of Texas, one of more than 40 people identified by Trump as potential high court nominees, backed the delay four years ago. But Cruz said in an interview with Fox News' Sean Hannity on Friday that Trump and the Senate should get the vacancy filled by Election Day, Nov. 3.

“We cannot have Election Day come and go with a four-four court. A four-four court that is equally divided cannot decide anything. And I think we risk a constitutional crisis if we do not have a nine-justice Supreme Court, particularly when there is such a risk of a contested election,” Cruz said.

The justices are supposed to meet by telephone on Sept. 28 to consider hundreds of appeals that piled up over the summer; Some will be set for arguments; most will be rejected. A week later, on Oct. 5, the court will begin its new term, hearing arguments remotely because of the coronavirus pandemic. 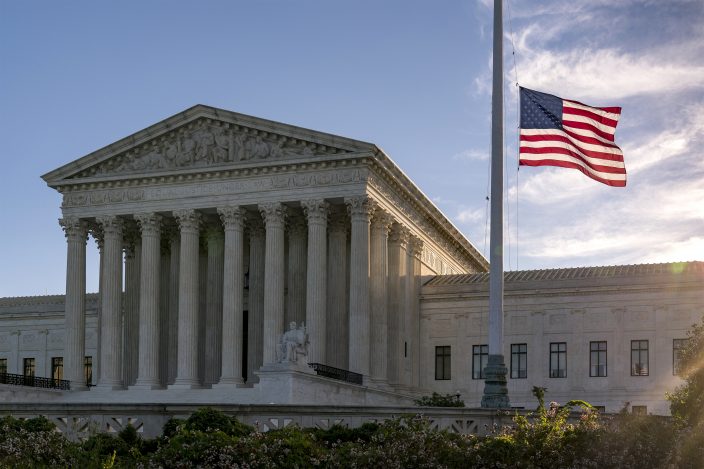 The flag flies at half-staff at the Supreme Court on the morning after the death of Justice Ruth Bader Ginsburg, 87, Saturday, Sept. 19, 2020 in Washington. (AP PhotoJ. Scott Applewhite)

After past deaths of justices, the entrance to the courtroom and the dead justice's place on the bench have been draped in black. That's one of many court practices that have been altered by the pandemic.

The court didn't schedule any politically explosive cases before the election. But it will turn quickly to two such disputes in the election's aftermath.

One case, set for argument a week after the election, could bring down the entire health care law popularly known as “Obamacare,” which is facing its third major Supreme Court challenge since 2012.

Until Ginsburg's death, a five-justice majority that included Roberts and the four liberals remained on the bench.

The other major case, which will be argued on Nov. 4, involves a dispute between Philadelphia and a Catholic agency that finds foster homes for children. At issue is the agency's refusal to place children with same-sex couples.

Any case that divides the court 4-4 after arguments could be held and set for a new round of arguments when the court is back at full strength.

Fifty years ago, the Democratic-controlled Senate rejected President Richard Nixon’s first two choices before Justice Harry Blackmun joined the court in May 1970. The most notable issue the justices put off deciding may have been challenges to the death penalty, according to Bob Woodward and Scott Armstrong’s book “The Brethren.” It was another two years, after the retirements of two more justices, before the court took up the issue and struck down every state death penalty statute.

The Supreme Court heard about 150 cases in those years — twice as many as today — and Blackmun had to deal with hundreds of appeals in which his vote would determine whether or the not the case was heard. In the end, he voted to hear only a handful, according to “The Brethren.”

In the 1987-88 term, President Ronald Reagan’s first two high court picks failed before Justice Anthony Kennedy was confirmed in February 1988. Kennedy came on board and the justices ordered new arguments in four cases in which they had been split 4-4, Jan Crawford wrote in her book, “Supreme Conflict.” Four hundred appeals also awaited Kennedy’s review, Crawford said.

Just a week before November's elec ...