Demonstrators took the streets of London, Tel Aviv and other cities on Saturday to protest coronavirus restrictions, decrying how the measures have affected daily life even with infection rates rising in many places and the global death toll approaching 1 million.

In the U.K., the latest official estimates released Friday showed that new infections and coronavirus hospital admissions have been doubling every seven to eight days. Britain has Europe’s highest death toll since the start of the pandemic, with 41,821 confirmed virus-related deaths.

The government recently banned social gatherings of more than six people in the hopes that it would help reverse a steep rise in COVID-19 cases and suggested that tougher restrictions could be coming. 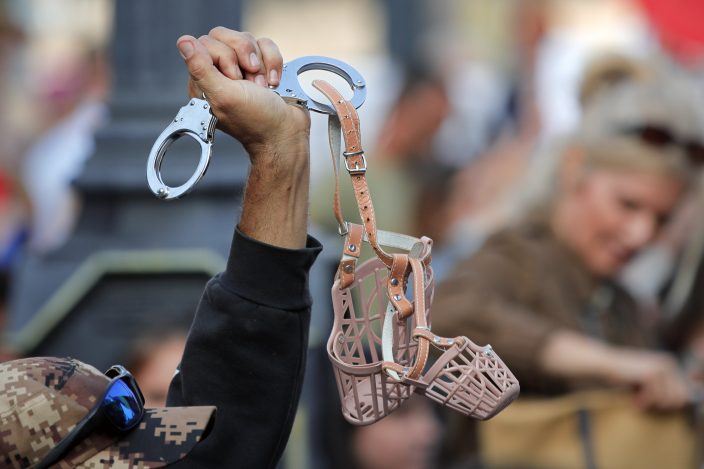 A man waves handcuffs attached to muzzles during a protest in Bucharest, Romania, Saturday, Sept. 19, 2020. Several hundred Romanians, including many families with young children, held a protest in the country's capital against measures meant to curb the spread of the coronavirus, especially social distancing and the mandatory use of masks in schools. (AP PhotoVadim Ghirda)

Saturday's protest in Trafalgar Square, which was themed “Resist and Act for Freedom,” ended in clashes between demonstrators and London police, as officers tried to disperse hundreds of people holding banners and placards scrawled with anti-restriction messages such as “This is now Tyranny.”

London Mayor Sadiq Khan has warned that the city may add curfews, force pubs to close earlier and ban household visits to try to limit the city's sharp rise in new cases.

“I am extremely concerned by the latest evidence I’ve seen today from public health experts about the accelerating speed at which COVID-19 is now spreading here in London,” Khan said Friday. “It is increasingly likely that, in London, additional measures will soon be required to slow the spread of the virus.” 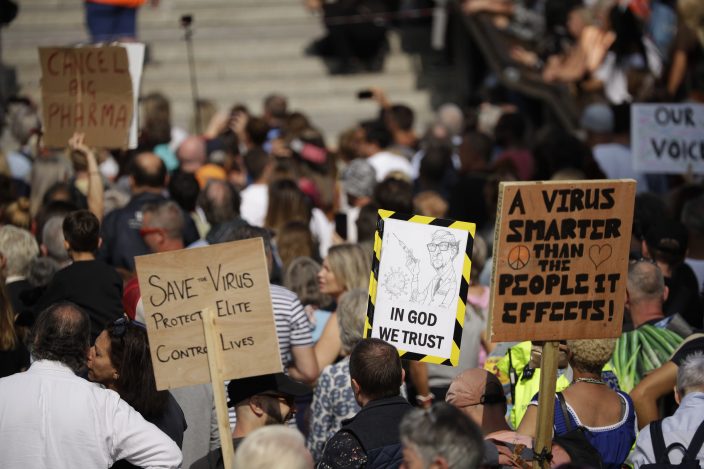 People hold placards including one portraying Bill Gates as they take part in a "Resist and Act for Freedom" protest against a mandatory coronavirus vaccine, wearing masks, social distancing and a second lockdown, in Trafalgar Square, London, Saturday, Sept. 19, 2020. (AP PhotoMatt Dunham)

In Israel, meanwhile, authorities ordered a full lockdown that began Friday and coincided with the Jewish High Holidays, which are typically celebrated with family gatherings and large prayer services.

Demonstrators in swimsuits gathered on a beach in Tel Aviv and waved black and pink flags connoting various protest movements.

In Australia, about 100 protesters gathered in the Melbourne beachside suburb of Elwood on Saturday before being scattered by police. 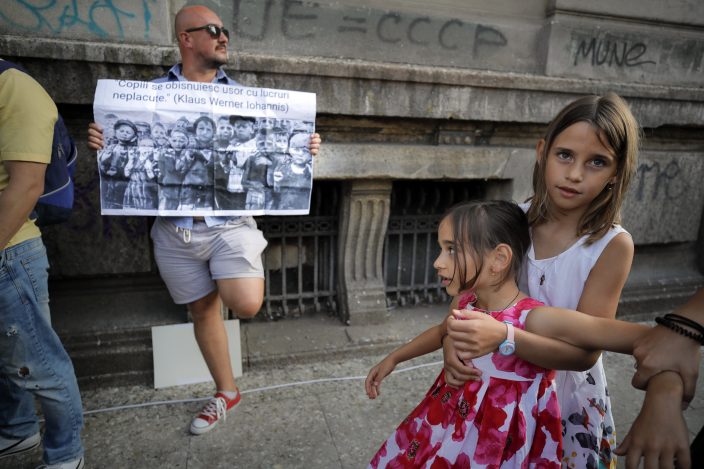 Children play next to a man holding a banner showing children in a concentration camp and a paraphrase from a statement by Romanian President Klaus Iohannis that reads "Children get used to unpleasant things easily" during a protest in Bucharest, Romania, Saturday, Sept. 19, 2020. Several hundred Romanians, including many families with young children, held a protest in the country's capital against measures meant to curb the spread of the coronavirus, especially social distancing and the mandatory use of masks in schools. (AP PhotoVadim Ghirda)

Police in the region have tried to dissuade lockdown opponents from protesting, but the rallies have become routine. The Victoria police said in a news release that “the behaviour of these selfish few who choose to blatantly ignore the directions will not be tolerated.”

In Romania's capital city, Bucharest, several hundred people protested against virus restrictions, including the mandatory use of masks in schools. About 2.8 million children in Romania began the school year Monday and schools took various precautions to try and prevent outbreaks.

Romania is among the countries that has had a new spike in confirmed cases, including a national daily record of 1,713 cases earlier in the week and 1,333 more on Saturday. In all, Romania has had 111,550 confirmed cases of COVID-19 and 4,402 deaths from the disease since the start of the pandemic.

Protesters in Bucharest’s University Square drew parallels between the protective measures against the pandemic and Nazi regimes. One of the speakers compared the measures to the torture of dissidents during communism.

The virulent language and comparisons echoed that of conservative protesters at rallies in dozens of U.S. cities earlier in the pandemic, including some who successfully pressured governors and local officials into lifting restrictions on businesses and social activities.

Experts have said some state authorities gave up on the restrictions too quickly, allowing the virus to continue spreading this summer in parts of the country that didn't experience the full force of the pandemic early in the year.

As of Saturday, Johns Hopkins University reported nearly 200,000 deaths in the U.S. since the start of the pandemic and 6.7 million confirmed cases of the virus in the U.S.

COVID-19 coverage safety net has plenty of holes in US