It was the second day in a row new infections fell below 30. There were also five deaths recorded Sunday.

Melbourne’s lockdown restrictions are due to be eased next weekend when child care centers will be allowed to reopen and gatherings of up to five people from two different households will be permitted. But that depends on the rolling 14-day average of new cases being below 50. It now stands at 36.2. 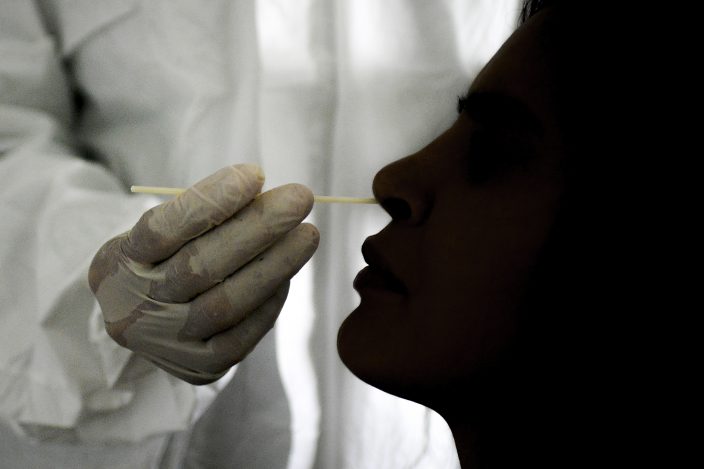 A doctor takes a nasal swab sample to test for COVID-19 at the Cocodrilos Sports Park in Caracas, Venezuela, Saturday, Sept. 19, 2020, amid the new coronavirus pandemic. (AP PhotoMatias Delacroix)

Meanwhile, Australian Prime Minister Scott Morrison described an unexpected fall in Australia’s unemployment rate to 9.3% — down 14 percentage points from its peak during the pandemic — as “pleasant encouragement.”

The figures show about 400,000 Australians recently have returned to work. 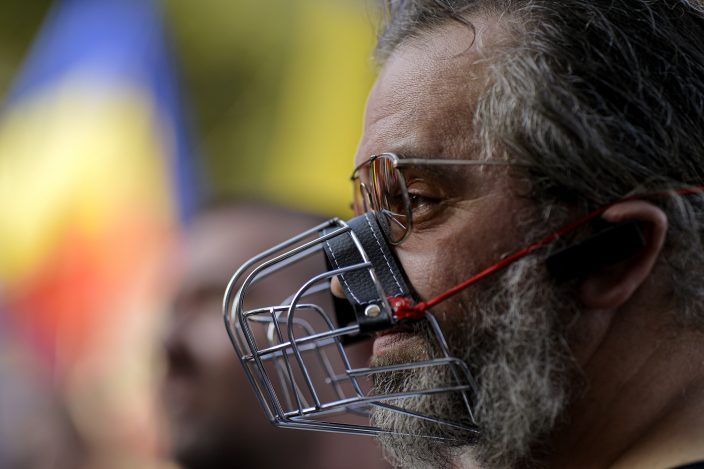 A man wears a muzzle during a protest in Bucharest, Romania, Saturday, Sept. 19, 2020. Several hundred Romanians, including many families with young children, held a protest in the country's capital against measures meant to curb the spread of the coronavirus, especially social distancing and the mandatory use of face masks in schools. (AP PhotoAndreea Alexandru)

— Romanian families protest mandatory use of masks in school 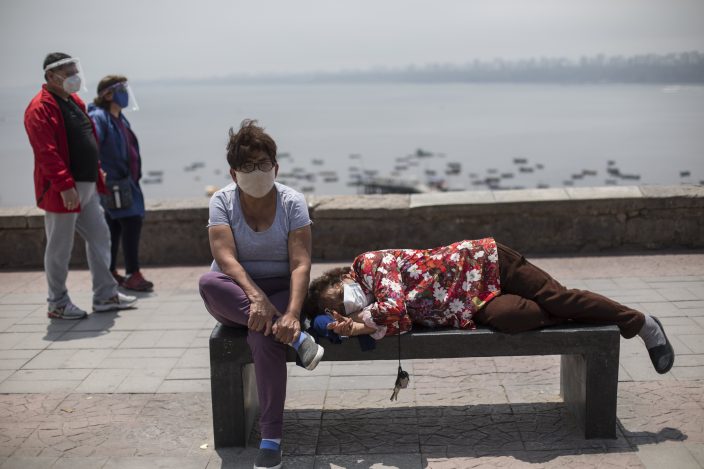 Sisters Alicia, left, and Lucy Marroquin rest while wearing masks due to COVID-19, on the seaside walk in the Chorrillos neighborhood of Lima, Peru, Saturday, Sept. 19 2020. (AP PhotoRodrigo Abd)

— Director of the University of Colorado’s football operations cited for violating coronavirus-related public health orders after a team practice involved 108 people on a mountain hike.

— Police in London clashed with protesters at a rally against coronavirus restrictions, even as the mayor warned that it was “increasingly likely” that the British capital would soon need to introduce tighter rules to curb a sharp rise in infections.

— The official Oktoberfest is canceled in Munich, so 50 of the German city’s beer halls are hosting their own, smaller parties conforming to coronavirus guidelines. 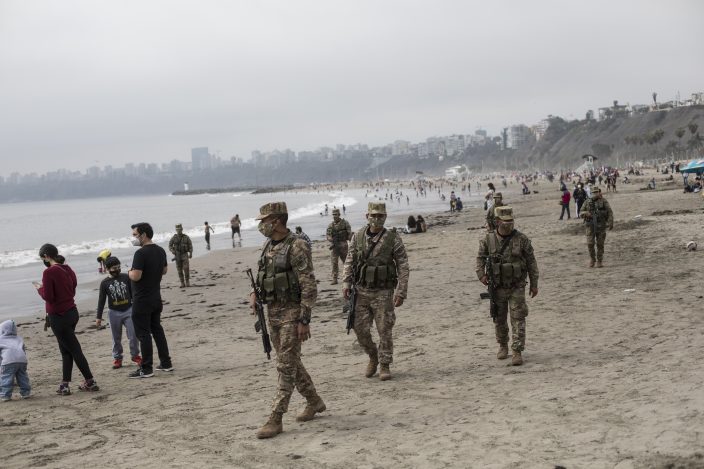 The Korea Disease Control and Prevention Agency said Sunday that the newly counted 82 cases took the country’s total to 22,975 with 383 deaths. 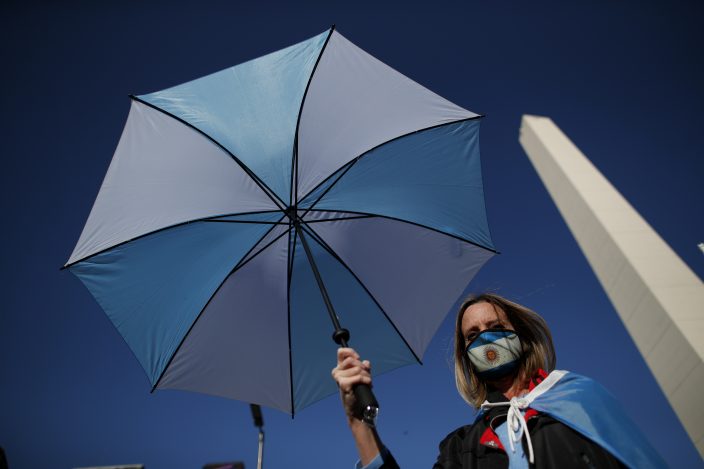 A woman holds an umbrella during a protest against a wide range of issues including government economic policy and state policies to combat the spread of COVID-19, in Buenos Aires, Argentina, Saturday, Sept. 19, 2020. (AP PhotoNatacha Pisarenko)

The drop is likely partly driven by the fact that authorities conduct fewer tests on weekends. But even before Sunday, South Korea’s daily tally has held in the 100s for more than two weeks, down from 400 in late August.

The government is urging the public not to lower their guard as small-scale clusters are still being reported. 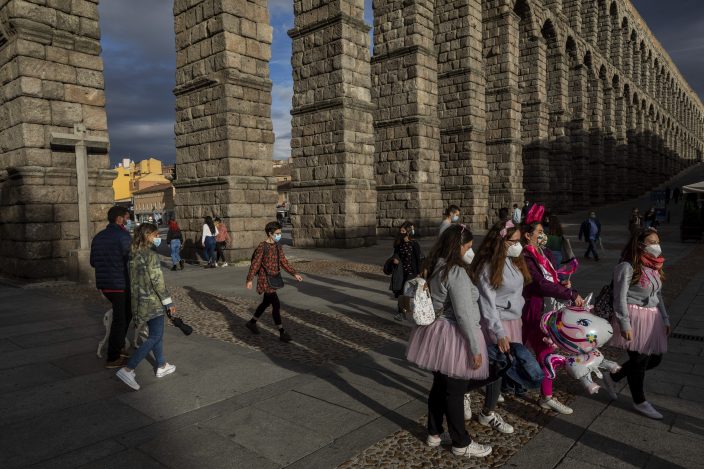 Pedestrians wearing face masks to prevent the spread of coronavirus walk near the aqueduct of Segovia, central Spain, Saturday, Sept. 19, 2020. Spain has been the hardest hit European country in the second wave of the pandemic. (AP PhotoBernat Armangue)

TOKYO — Train stations and airports in Japan are filled with people traveling over the “Silver Week” holiday weekend, in a sign of recovery amid the coronavirus pandemic.

The surge in domestic travel is in contrast to previous holidays, when pressure was high for people living in urban congested areas to stay home and avoid areas with fewer infections.

The new daily cases in Tokyo have recently fluctuated around 200, but Japan does not have widespread testing and many cases are likely going undetected. Baseball games, stores and theaters are open again with social distancing, mask-wearing, hand sanitizers and temperature checks. 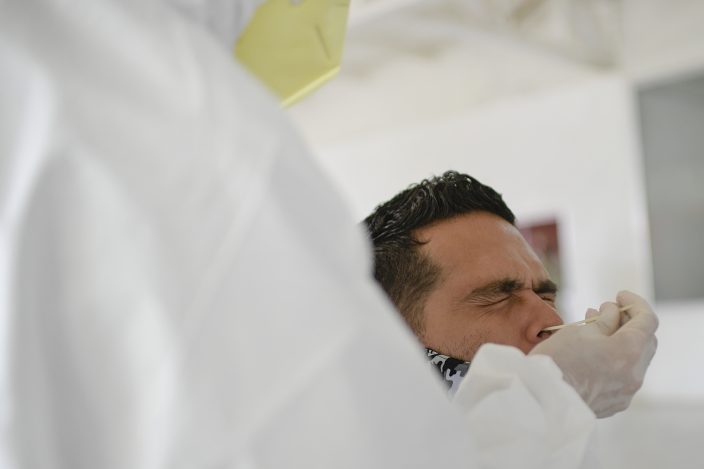 A doctor takes a nasal swab sample to test for COVID-19 at the Cocodrilos Sports Park in Caracas, Venezuela, Saturday, Sept. 19, 2020, amid the new coronavirus pandemic. (AP PhotoMatias Delacroix)

Japan, with about 1,500 deaths related to COVID-19, has banned almost all overseas visitors and requires quarantine and virus checks for returning Japanese. The Silver Week includes this weekend and two national holidays, Respect for the Aged Day and the Autumn Equinox.

PARIS — Coronavirus infections tipped the scales again in France on Saturday with nearly 13,500 new infections in 24 hours. Economy Minister Bruno Le Maire is among them. 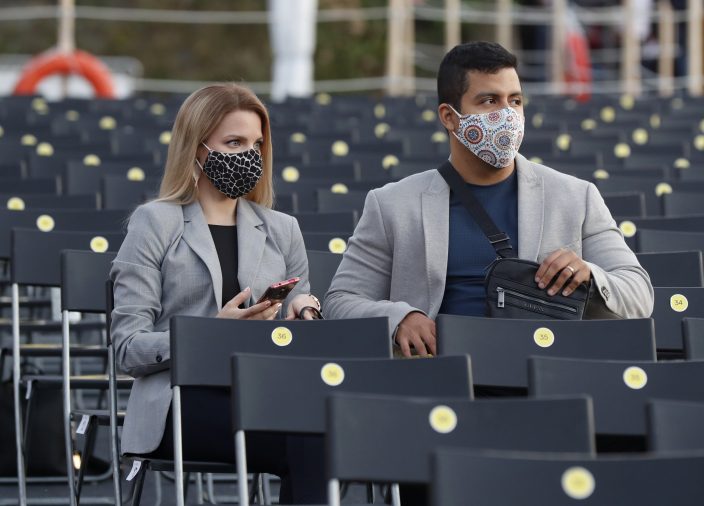 People wearing face masks wait for the start of a concert of British violinist Daniel Hope set on a floating stage on the Vltava river in Prague, Czech Republic, Saturday, Sept. 19, 2020. The Czech Republic has been been facing the second wave of infections of COVID-19. The number of new confirmed coronavirus infections has been setting new records almost on a daily basis. (AP PhotoPetr David Josek)

He announced Friday in a tweet that he had tested positive with no symptoms and was working during self-isolation. The high-profile Le Maire is the fourth French minister to test positive since March.

It was the second day in a row that new COVID-19 cases in France were above 13,000. The French health agency said Friday’s big jump was the result of one hospital in the Essonne region south of Paris belatedly reporting numerous cases. It wasn’t clear whether that kind of add-on effect was at play on Saturday.

For health authorities, it is clear that France needs to worry about the spread of the coronavirus, with over 1,000 clusters detected. There have been 31,274 deaths since the start of the pandemic — among the highest death tolls in Europe — and 26 deaths in the last 24 hours. 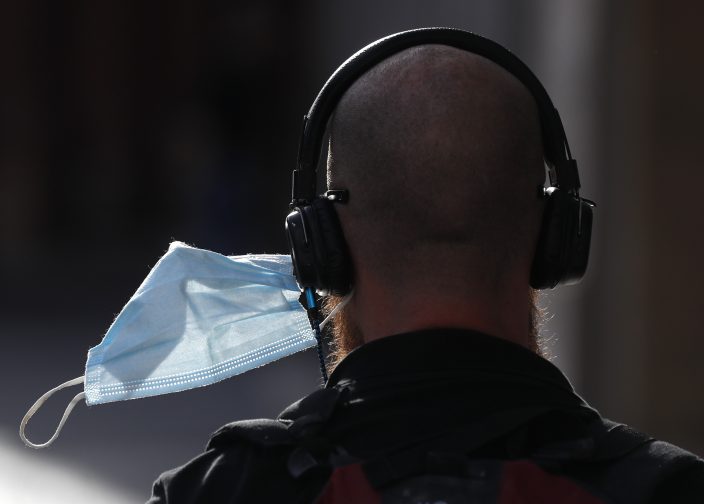 A man wears his face mask attached to his headphones in Prague, Czech Republic, Saturday, Sept. 19, 2020. The Czech Republic has been been facing the second wave of infections of COVID-19. The number of new confirmed coronavirus infections has been setting new records almost on a daily basis. (AP PhotoPetr David Josek)

In Paris, the Prefecture de Police warned in a tweet that there will be no more tolerance for bars and restaurants where rules to counter the virus aren’t respected, like standing at counters or failing to respect social distancing. Police “are intensifying” checks that can lead to closing establishments, it said. In one Paris district, 13 establishments were formally notified that they risk being shut down and 16 others were fined, the prefecture tweeted.

WATERBURY, Conn. — Connecticut U.S. Rep. Jahana Hayes says she and all of her staff will be quarantining after one of her aides tested positive for the coronavirus.

The first-term Democratic congresswoman, who represents much of western Connecticut, said in a Twitter post Saturday that she did not have any symptoms and was awaiting an appointment to get tested. 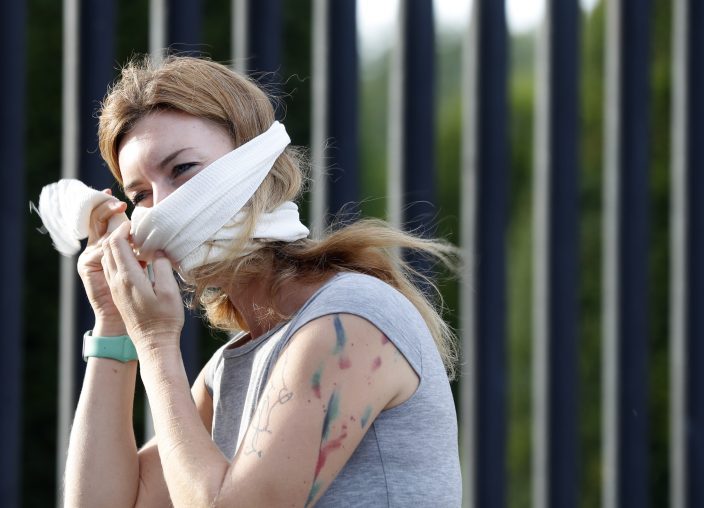 A woman adjusts a bandage in use as a face mask attached to her headphones in Prague, Czech Republic, Saturday, Sept. 19, 2020. The Czech Republic has been been facing the second wave of infections of COVID-19. The number of new confirmed coronavirus infections has been setting new records almost on a daily basis. (AP PhotoPetr David Josek)

“I have been in close contact with the staffer (who tested positive) and I have worked in both my CT and D.C. offices over the last week,” Hayes said. “All of my staff has been notified and directed to quarantine and get tested. I will quarantine until I have the test and receive the results.”

Hayes says all of her staff in Connecticut and Washington will be working remotely until further notice. 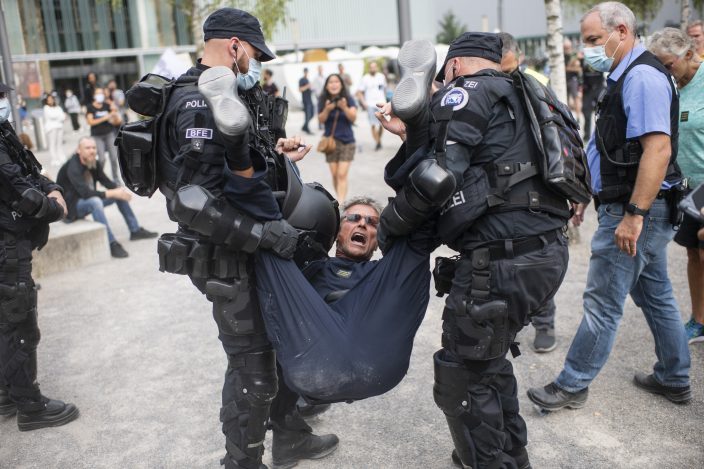 Policemen arrest a demonstrator who attends a protest against the Swiss government's measures to slow down the spread of the coronavirus disease (COVID-19), at the Turbinenplatz in Zurich, Switzerland, Saturday, Sept. 19, 2020. (Ennio LeanzaKeystone via AP)

According to Johns Hopkins University data analyzed by The Associated Press, the seven-day rolling average of daily new cases in Arizona rose over the past two weeks, from 575 new cases on Sept. 4 to 774 on Friday.

The increase followed the state Department of Health Service’s recent changing of its case-counting methodology to adopt an updated national standard that includes “probable” results from less-accurate antigen testing.

The counting change resulted in big bulges of additional cases Thursday and Friday as the department updated its records to include more than 1,300 probable cases from September and previous months.

Meanwhile, the seven-day rolling average of daily deaths dropped during the past two weeks, going from 32 deaths on Sept. 4 to 23 deaths on Friday.

TEL AVIV, Israel — Dozens of Israelis held a beach demonstration against a new lockdown prompted by a surge in coronavirus cases.

The protesters Saturday relied on a loophole in the national closure’s guidelines that allows people to travel beyond the one square kilometer limit if they are to participate in a demonstration. The three-week nationwide lockdown began Friday as Israel celebrates Rosh Hashana, the Jewish new year.

Some protesters carried pictures of Prime Minister Benjamin Netanyahu, who has been the target of weekly protests during the summer for his corruption charges and failure to handle the pandemic.

Israel has largely contained the virus in the spring, but the abrupt reopening of the economy in May worsened the outbreak. The protests against Netanyahu also were fueled by business owners who say the government failed to offer proper compensation in the first lockdown.

The government decided to impose a second lockdown because health authorities are recording thousands of cases a day, with a confirmed death toll of about 1,200.

The monastery, which has about 30 monks, is not allowing visitors.

ROME — The Italian health ministry reported another 1,638 new cases of coronavirus and 24 deaths.

The health ministry says the new cases were based on a record 103,223 tests. While countries such as Germany have been processing more than double that number in recent days, Italy has been limited at around 100,000 tests.

Public health officials said in their weekly monitoring report that Italy’s seven-week uptick in cases represented a “slow and progressive worsening of the outbreak.” However, it’s not as bad as in other European countries where new daily cases have exceeded 10,000.

The Mafia is becoming legitimate i ...

The Latest: Fishing crews arriving in New Zealand have virus