As the coronavirus pandemic began bearing down on the United States in March, President Donald Trump set out his expectations.

In the coming days, the number of U.S. deaths is set to clear the outer band of the president’s projections: 200,000, according to the official tally, though the real number is certainly higher. The virus continues to spread and there is currently no approved vaccine. Some public health experts fear infections could spike this fall and winter, perhaps even doubling the death count by the end of the year. 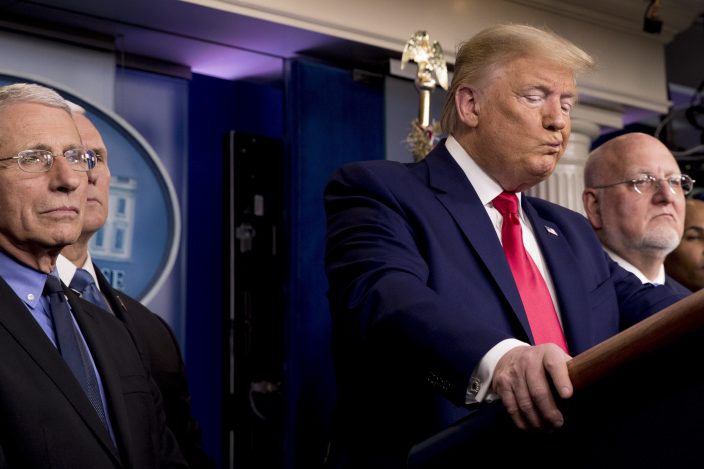 FILE - In this Feb. 29, 2020 file photo, President Donald Trump, accompanied by, from left, National Institute for Allergy and Infectious Diseases Director Dr. Anthony Fauci, Vice President Mike Pence, and Robert Redfield, director of the Centers for Disease Control and Prevention, reacts to a question during a news conference on the coronavirus in the press briefing room at the White House in Washington. Public health officials were already warning Americans about the need to prepare for the coronavirus threat in early February when President Donald Trump called it “deadly stuff” in a private conversation that has only now has come to light. (AP PhotoAndrew Harnik, File)

Yet the grim milestone and the prospect of more American deaths to come have prompted no rethinking from the president about his handling of the pandemic and no outward expressions of regrets. Instead, Trump has sought to reshape the significance of the death tally, trying to turn the loss of 200,000 Americans into a success story by contending the numbers could have been even higher without the actions of his administration.

“If we didn’t do our job, it would be three and a half, two and a half, maybe 3 million people,” Trump said Friday, leaning on extreme projections of what could have happened if nothing at all were done to fight the pandemic. “We have done a phenomenal job with respect to COVID-19.”

Trump’s reelection prospects will hinge in part on whether enough voters agree with that assessment. The challenge he faces in making his case, with just over six weeks before the Nov. 3 election and voting already underway in some states, is clear. 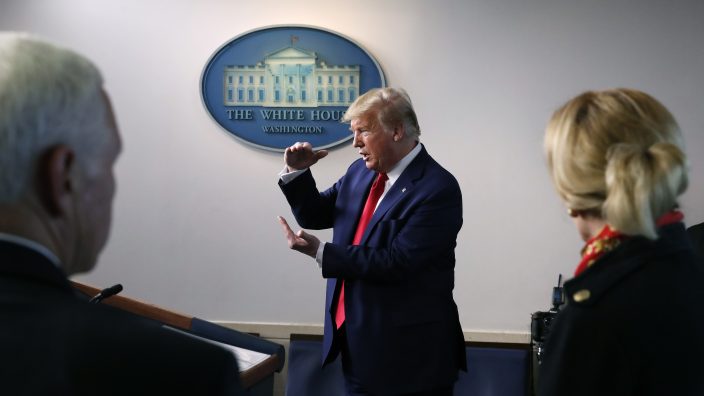 FILE - In this March 31, 2020, file photo President Donald Trump speaks about the coronavirus in the James Brady Press Briefing Room of the White House in Washington, as Vice President Mike Pence and Dr. Deborah Birx, White House coronavirus response coordinator, listen. Trump acknowledged that from early on he was intentionally “playing down” the threat from the coronavirus outbreak that has gone on to kill more than 190,000 Americans. (AP PhotoAlex Brandon, File)

J ust 39% of Americans approve of the president’s handling of the pandemic, according to a poll from The Associated Press-NORC Center for Public Affairs Research. Roughly one-quarter of Republicans say they don’t approve of Trump’s stewardship of the public health crisis, though his overall backing among GOP voters sits at a comfortable 84%.

There's also little doubt that the death toll in the U.S. has soared past where Trump repeatedly assured the public it would be. In February, when the first coronavirus cases were detected in the U.S., the president said the numbers would be “down to close to zero” within day s. In early April, when U.S. officials estimated at least 100,000 people would die from the pandemic even if all conceivable steps were taken against it, Trump suggested the numbers would be lower, saying: “I think we’re doing better than that.”

He's shifted again in recent days, saying that the U.S. remains a success story because some models showed the nation could have 240,000 deaths — a threshold that appears likely to be eclipsed by the end of the year. 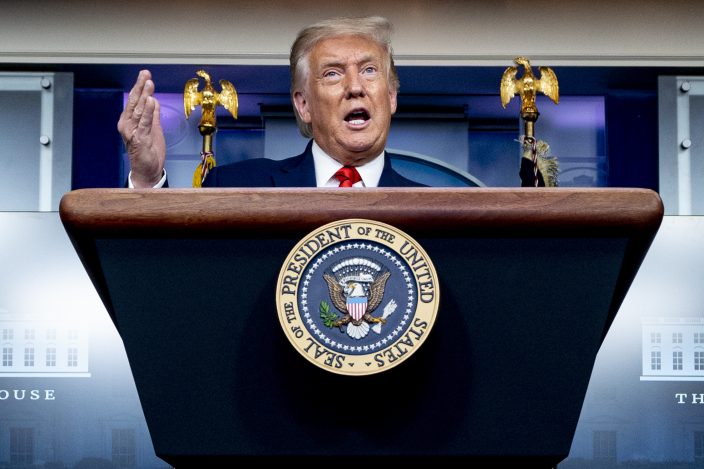 In this Aug. 31, 2020 file photo, President Donald Trump speaks during a news conference in the James Brady Press Briefing Room in Washington. Most Americans are deeply pessimistic about the direction of the country and skeptical of President Donald Trump’s handling of the coronavirus pandemic. That's according to a new poll from The Associated Press-NORC Center for Public Affairs Research. The survey shows that roughly 7 in 10 Americans think the nation is on the wrong track. And as the nation nears 200,000 deaths from the coronavirus pandemic, just 39% of Americans approve of Trump's handling of the health crisis. Americans have a more favorable views of public health officials, as they have throughout the pandemic. (AP PhotoAndrew Harnik)

Well aware of his sluggish standing with voters on the pandemic, Trump has spent recent weeks trying to refocus his race against Democrat Joe Biden on other issues, including promising white suburban voters that he would keep crime in liberal cities from encroaching on their neighborhoods.

Trump will now campaign in particular on the courts, given Friday's death of Supreme Court Justice Ruth Bader Ginsburg, seeking to lure back Republican voters who may have turned on him during the pandemic, with the promise of more conservatives on the high court.

Though the Supreme Court vacancy does significantly jolt the White House race, Biden still wants to keep much of the focus on the coronavirus. He strengthened his standing through the summer by hammering what he calls the Trump administration’s failures to take the virus threat seriously and to provide consistent guidance to the public, including around the effectiveness of wearing face masks.

After revelations in a new book from journalist Bob Woodward that Trump intentionally played down the seriousness of the virus earlier this year, Biden said of a president's responsibilities: “You’ve got to level with the American people — shoot from the shoulder,” adding, “There’s not been a time they’ve not been able to step up.”

Trump has insisted he wasn’t downplaying the severity of virus when he compared it with the seasonal flu and undercut public health officials who pushed for more stringent mitigation efforts. Yet he’s repeatedly flouted his own administration’s safety guidelines, rarely wearing a mask himself and holding large campaign events with little evidence of social distancing among his crowds.

With the death toll continuing to climb, Trump has also repeatedly passed up opportunities to serve as a unifying force for communities and families grieving the loss of loved ones. Instead, he's effectively discounted the deaths of Americans who live in Democratic-leaning states, suggesting he has little responsibility for the well-being of those who don't support him politically.

“If you take the blue states out, we’re at a level that I don’t think anybody in the world would be at,” Trump said this past week about the death toll. “Some of the states, they were blue states and blue state-managed.”

It was a jarring statement from an American president, yet one in keeping with Trump's handling of the pandemic and his presidency. He's long taken a transactional approach to his office, and he spent the opening weeks of the pandemic feuding with Democratic governors in hard-hit states, challenging them to lift restrictions that he deemed harmful to the strong economy he’d hoped to ride to a second term.

“He sees everything, including the implications of this terrible virus, in terms of his own political and personal success — ‘How does it affect me and my electability and my popularity,’” said Margaret Susan Thompson, a professor of history and political science at Syracuse University.

The question looming over his presidency now, as Americans mourn 200,000 lives lost, is what the effects of his handling of the pandemic will be on his political future. The answer will come soon enough from his fellow Americans.

EDITOR'S NOTE — AP Washington Bureau Chief Julie Pace has covered the White House and politics for the AP since 2007. Follow her at https://twitter.com/jpaceDC