Brazil’s Alter do Chao, a sleepy village that blends rainforest and beaches, bet on tourism and scored big. Visitors flocked here to eat Amazonian river fish while gazing out over the water, and to take day trips offering the chance to meet Indigenous people and see pink dolphins.

But this once pristine place is discovering that the perils of becoming a can’t-miss destination extend beyond hordes of weekend warriors sapping its unspoiled charm. Problems rife throughout the Amazon region — land grabbing, illegal deforestation and unsanctioned construction — are plaguing this ecotourism hot spot.

By 2018, land grabbing had grown so pervasive that one of Brazil’s environmental protection agencies said Alter do Chao needed “urgent interventions against the rise of invaders” so it could preserve 67% of its protected areas. 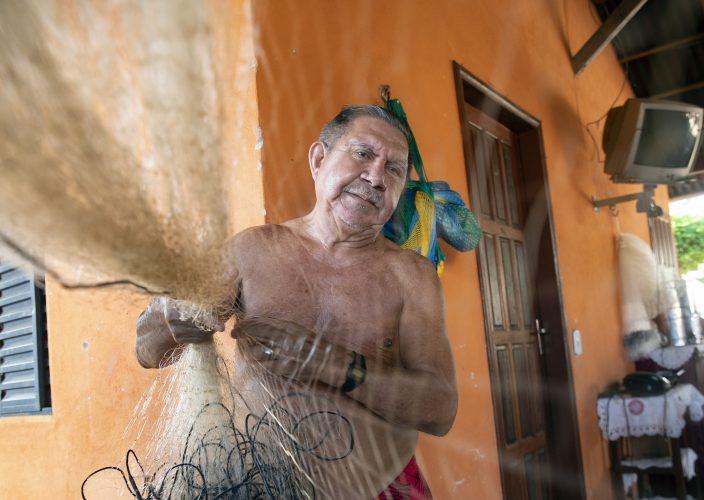 Fisherman Alfredo Jose Branco fixes his net at his home in Alter do Chao, district of Santarem, Para state, Brazil, Thursday, Aug. 27, 2020. Branco was born and raised in this once-isolated Brazilian Amazon district, a tropical paradise that blends dense rainforest and beaches by the clear waters of the Tapajós river. (AP PhotoAndre Penner)

One month later, President Jair Bolsonaro, who has pledged to promote development of the Amazon, was inaugurated.

Alter do Chao’s struggle with land grabbers has only worsened since, residents and activists say, with lawbreakers more brazen about occupying land, then slashing and burning forest to make way for houses and fields. Meanwhile, dozens of projects in this riverside village known as the “Amazon Caribbean” have advanced despite being built within protected areas or lacking proper permits.

Most newcomers say they want to buy land legally and cheaply, said Ederson Santos, a motorboat driver. Failing that, however, many are happy to fence off any unoccupied area and claim it as their own. 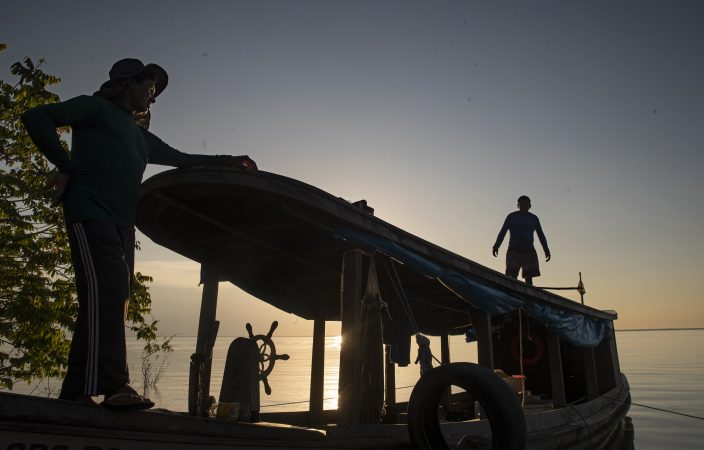 Fishermen walk on their boat as they fish in the Tapajos river in Alter do Chao, district of Santarem, Para state, Brazil, Thursday, Aug. 27, 2020. Last year a massive fire, whose origins are still under investigation, destroyed an area equivalent to 1,600 soccer fields in Alter do Chão. (AP PhotoAndre Penner)

Santos brought The Associated Press to a recent development near the so-called Enchanted Forest, where a massive pier now links to an expansive home beside a stream. Land grabbers like this have seized many of the 17 nearby waterways, he said.

“The family that lives there never asked permission for any of this. The house, the construction, nothing. Everyone knows,” said Santos, 47. “Now they are putting wooden stakes in the water. Soon there will be a net so no one else can come here.”

The residents weren’t home the day the AP visited, and Santos said he doesn’t know the owner’s name. 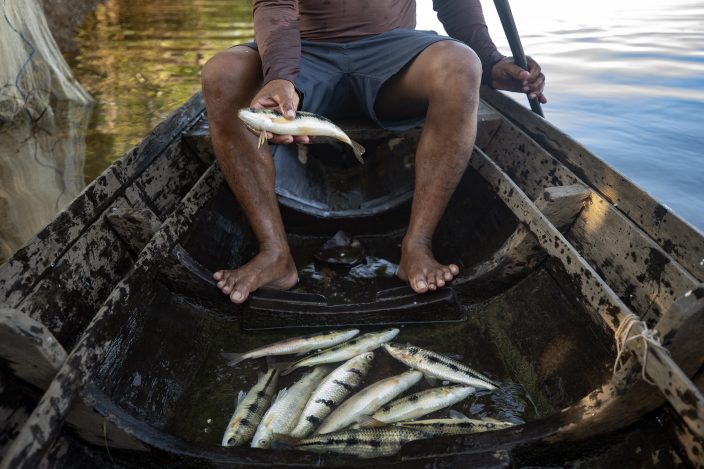 A fisherman shows his catch from the Tapajos river in Alter do Chao, district of Santarem, Para state, Brazil, Thursday, Aug. 27, 2020. Fishermen say they can no longer depend on the river to support their families, as its currently stormy waters scare much of the fish away. They blame that on cargo ships and ferries routed to the Santarém port, which takes Brazil's soybeans, beef and corn abroad. (AP PhotoAndre Penner)

Land grabbing consists of invading public areas and getting documents, forged or not, to certify their possession. Brazil doesn’t have a registry consolidating all municipal, state and federal records for landowners, making it easier for criminals.

Historically, Brazil has done little to stop land grabbing in the vast Amazon. But Alter do Chao should be easier to monitor; it has a total protected area of only 66 square miles (170 square kilometers) and has several non-profit organizations dedicated to its defense.

City Hall in the municipality of Santarem, which runs the village, said in a statement that its agents are constantly conducting preemptive raids to stop land grabbing, but provided no details. Residents said local environment enforcement agents are hardworking, but too few. 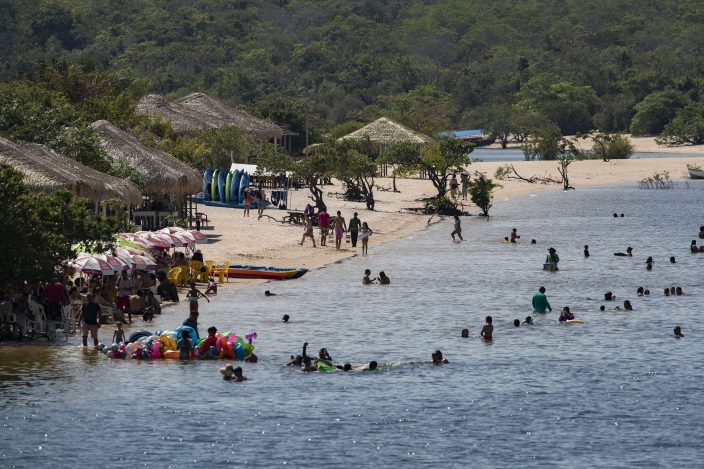 People swim in Alter do Chao, district of Santarem, Para state, Brazil, Thursday, Aug. 27, 2020. One of Brazil’s trendiest destinations, Alter do Chão welcomes up to 100,000 visitors each year in the high season, though considerably less in 2020 because of the COVID-19 pandemic. (AP PhotoAndre Penner)

Rilson Maduro, owner of a restaurant dishing up Amazon cuisine like the tucunare fish, says development is also erasing the area’s origins. Ceramics and bones from his ancestors, of the Borari Indigenous group, have been found there over the years.

“Some land grabbers went there because they like the view, others because it is good for agriculture,” he said. “We want to keep it intact because of our history.”

A seven-story tower under construction near the waterfront will be Alter’s tallest building when it is completed; projects like it will house a growing population of tourists and residents. 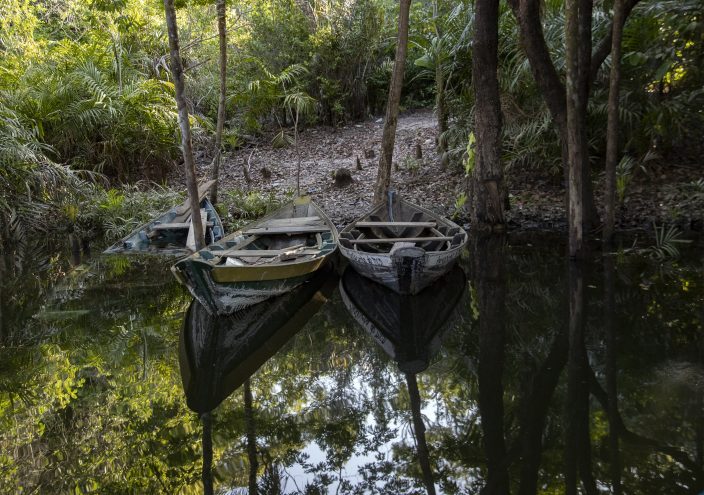 Small boats remain idle on the banks of the Tapajos river in Alter do Chao Para state, Brazil, Wednesday, Aug. 26, 2020. Environmentalists say that up to 500 species of trees and just as many of animals, including a kind of local jaguar, are increasingly under threat of extinction in the area. (AP PhotoAndre Penner)

The village of some 7,000 people attracts about 100,000 tourists during high season. A picture-perfect spit of sand jutting across the water in front of its central plaza — known as Love Island — is the biggest draw for selfie-snapping visitors. And it’s easily accessible, located only 20 miles from Santarem's airport.

These days Alter do Chao more closely resembles the idyll of the pre-tourist boom era, when it still felt untapped. The coronavirus has dried up much of its tourism, though its central square still features stalls serving regional dishes like tacaca, a shrimp soup. It's easy to socially distance while sipping caipirinhas made from Amazonian fruit.

João Romano moved here in 2017 from Sao Paulo, Brazil’s biggest metropolis, in search of a slower-paced life. He and his wife watched monkeys swing past their wooden home, and their daughters pick fruit dangling from trees. He became a volunteer firefighter for an environmental group, and believed he’d found peace. 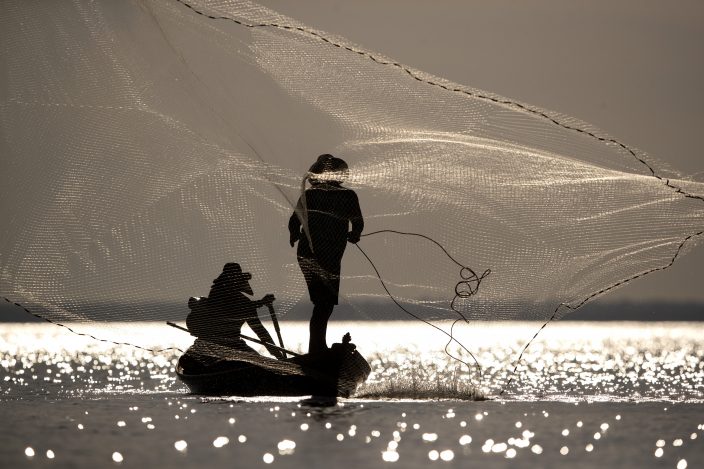 Fisherman Sandro Branco casts his net into the Tapajos River in Alter do Chao, district of Santarem, Para state, Brazil, Thursday, Aug. 27, 2020. Environmentalists say Alter do Chao is increasingly affected by destruction in protected areas on the shores of the Tapajos, which are almost 90% made of rainforest and clusters of tropical savanna. (AP PhotoAndre Penner)

But fighting fires put him in developers’ cross-hairs. His world was turned upside down late last year when local police accused him and three fellow firefighters of setting a protected forest area ablaze. Intense media coverage followed: They were jailed for three days and, upon release, threatened by those who accused them of being radical environmentalists who set the fire to sully Bolsonaro’s reputation and undermine his plans to develop the Amazon.

“There is a big pressure here for what they believe development is. They don’t see potential for sustainable growth,” said Romano, 28.

Bolsonaro trumpeted the police allegations, claiming that scheming non-profits — not farmers, loggers or land grabbers — were responsible for deploying arsonist firefighters, funded by actor Leonardo DiCaprio. Non-profits working to protect the Amazon are a “cancer,” he asserted in a recent Facebook live broadcast.

Fisherman Sandro Branco poses for a photo on teh banks of the Tapajos river in Alter do Chao, district of Santarem, Para state, Brazil, Thursday, Aug. 27, 2020. Dubbed "the Brazilian Caribbean," Alter do Chao, on the edges of the Tapajos River is facing growing environmental concerns. Real estate development, much of it illegal, flocks of tourists and neighboring ports exporting the country's soybeans and corn are affecting the lives of villagers and of an Indigenous group in the region. (AP PhotoAndre Penner)

But a recording of Santarem Mayor Nelio Aguiar revealed that he told Para state Gov. Helder Barbalho that in fact local police were behind the fire.

“This is about people setting fires so they can later split the land, sell it,” the mayor said in the recording. Local police denied the allegation and continue to blame the firefighters for the fire.

The area that was devastated now features several houses visible from the water, with even more hidden from view.

Last month, Federal Police exonerated the firefighters of any possible involvement. The findings of their investigation were sent to the Para state prosecutors' office, which has yet to announce whether it will drop the case.

The federal prosecutors’ office confirmed to the AP that the fire was started in an area where a major land grabber has previously operated. Silas da Silva Soares was sentenced to six years and 10 months in prison in 2018 for seizing land in protected areas, but remains at large.

Caetano Scannavino, coordinator of the non-profit Health and Happiness, where the firefighters worked, said the episode has only emboldened the region’s land grabbers.

“The economic pressure is growing, and if nothing is done now ... it might be too late for Alter to keep its natural beauty. It is that beauty that brings people here,” Scannavino said. “Economically there will be short-term benefits, but a lot of the value will be lost in the long run.”

In June, federal prosecutors sent a recommendation to Santarem City Hall urging that it not grant permits for any construction in protected areas. They highlighted at least 40 “irregular” projects under way, among them the seven-story tower near the waterfront.

“The Alter I once knew is changed and I don’t like many of those changes,” said 71-year-old fisherman Alfredo José Branco, as he slowly moved from a hammock to a plastic armchair in his tiny backyard. His family is among the last of a group that has lived for decades near the beach.

“I will stay, but I wonder if my children and grandchildren will be able to,” he said. “Everywhere I go has invaders now.”