The public declaration by Bedie ahead of the Oct. 31 vote raises the specter of unrest in a country already scarred by post-election violence in 2010-2011 that left more than 3,000 people dead.

In their declaration Sunday, Bedie and several other opposition leaders also called for the return of two prominent politicians in exile including ex-President Laurent Gbagbo who refused to concede defeat after the 2010 vote. 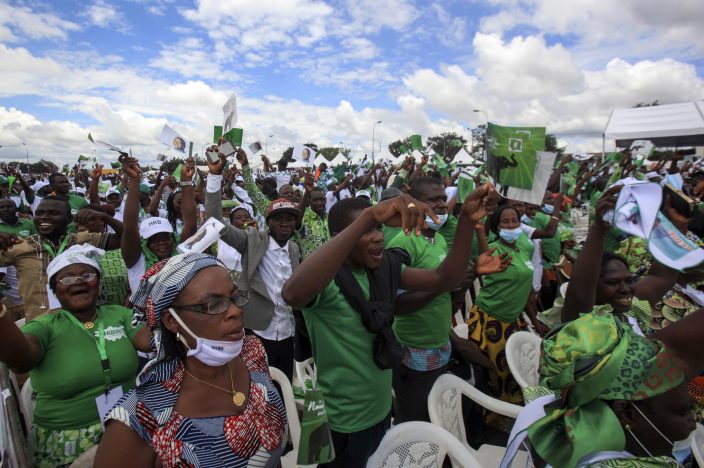 Supporters gather at a party rally to celebrate the presidential candidacy of Henri Konan Bedie for the opposition PDCI-RDA party and as a show of strength ahead of next months presidential election, in Yamoussoukro, Ivory Coast Saturday, Sept. 12, 2020. Bedie, who led the country from 1993-1999, and Pascal Affi N'Guessan of the Ivorian Popular Front party, are the two opposition leaders who pose the strongest threat to incumbent President Alassane Ouattara. (AP PhotoDiomande Ble Blonde)

Ouattara ultimately prevailed and has been in power for nearly a decade. However, after his chosen heir-apparent died unexpectedly the incumbent president said he would run for a third term. Ouattara insists that his first two terms do not count toward term limits because Ivory Coast has since approved a new constitution.

At a meeting over the weekend, the opposition leaders called on Ivorians to “mobilize for legitimate demonstrations throughout the country, in accordance with the Constitution, for the restoration of democracy and the rule of law, for fair, regular, transparent and inclusive elections.”

Activists want Ouattara disqualified from the election although the country's Constitutional Council already has validated his candidacy. The opposition now wants that council dissolved along with the Independent Electoral Commission, though has stopped short of boycotting next month's vote.

They are also demanding an audit of the country's electoral list of voters, and the return of political exiles led by Gbagbo and former Prime Minister Guillaume Soro.

Gbagbo has been acquitted of crimes against humanity charges at the International Criminal Court, but prosecutors are appealing and in the meantime Ivorian officials have denied him a passport to return home. Ivorian authorities, meanwhile, issued an arrest warrant earlier this year for Soro on charges his supporters say are politically motivated, effectively blocking his candidacy too as he has remained in Europe.

Members of the Ivorian Popular Front party who are still loyal to its founder, former president Gbagbo, were in attendance this weekend as were representatives of Soro, witnesses said.