A star-studded cast of NFL players departed their games with injuries on Sunday.

Many of them could miss the rest of the season.

Start with running back, where Giants star Saquon Barkley is believed to have torn the ACL in his right knee early in their loss at Chicago. All-Pro standout Christian McCaffery departed Carolina's loss to the Buccaneers with a right ankle injury, 49ers running back Raheem Mostert left with a knee injury, and the Rams' Cam Akers hurt his ribs. 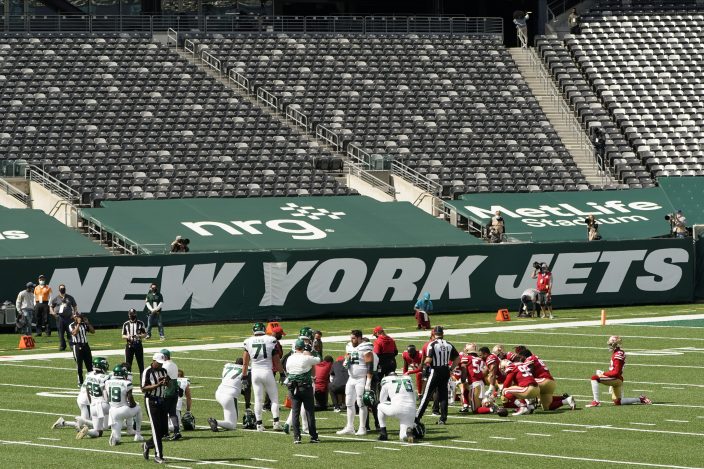 Players gather around an injured person during the first half of an NFL football game between the New York Jets and the San Francisco 49ers at a nearly empty MetLife Stadium, Sunday, Sept. 20, 2020, in East Rutherford, N.J. (AP PhotoCorey Sipkin)

Plenty of wide receivers went down, too: The Packers' Davante Adams hurt his hamstring in a win over the Lions; the Colts' Parris Campbell was carted off with a leg injury against Minnesota; the Giants' Sterling Shepard sustained a toe injury; and the Broncos' Courtland Sutton left their loss in Pittsburgh with a knee injury.

Then there were the quarterbacks: Tyrod Taylor didn't start the Chargers' game against Kansas City after sustaining a chest injury before kickoff, giving way to rookie Justin Herbert. The Broncos' Drew Lock hurt his shoulder. The 49ers' Jimmy Garoppolo tried to play through a right ankle injury before Nick Mullens took over for the second half.

The injury landslide came after an opening week in which most NFL teams escaped relatively unscathed, despite a virtual offseason and the elimination of the entire preseason schedule because of the coronavirus pandemic. 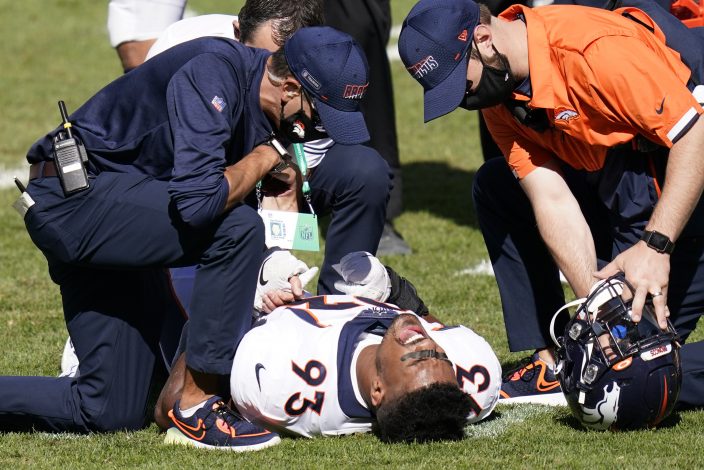 Denver Broncos defensive end Dre'Mont Jones (93) is tended to by team trainers after being injured during the second half of an NFL football game against the Pittsburgh Steelers, Sunday, Sept. 20, 2020, in Pittsburgh. (AP PhotoKeith Srakocic)

The most noteworthy single injury may have been to Barkley — "Going to see some doctors tomorrow. We will wait and see what that is,” Giants coach Joe Judge said — while the hardest-hit team may have been the 49ers.

Garoppolo's high-ankle sprain could keep him out next week, too, while Mostert's will be re-examined Monday for what is thought to be a mild ligament sprain. Tevin Coleman also left San Francisco's win over the Jets with a late knee injury.

The news was more dire on defense. Nick Bosa, the reigning Defensive Rookie of the Year, and fellow lineman Solomon Thomas, the third overall pick in the 2017 draft, were both carted off the field with what the 49ers feared could be torn knee ligaments. Bosa and Solomon will be examined again early this week. 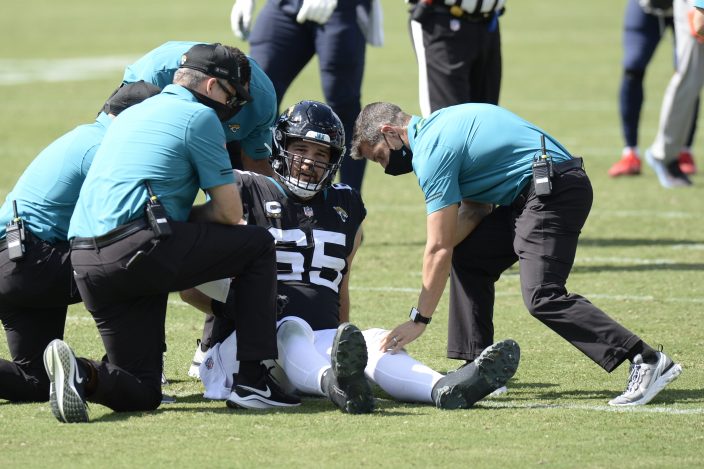 Jacksonville Jaguars center Brandon Linder (65) is helped by medial personnel after being injured in the second half of an NFL football game against the Tennessee Titans Sunday, Sept. 20, 2020, in Nashville, Tenn. (AP PhotoMark Zaleski)

"You have a little mixed emotions when you lose some guys like that,” 49ers coach Kyle Shanahan said. “When you do lose some good guys like we like we did, that’ll probably be for a while, we need guys to get better.”

The Jets also had a considerable injury list by the time San Francisco polished off its 31-13 rout. 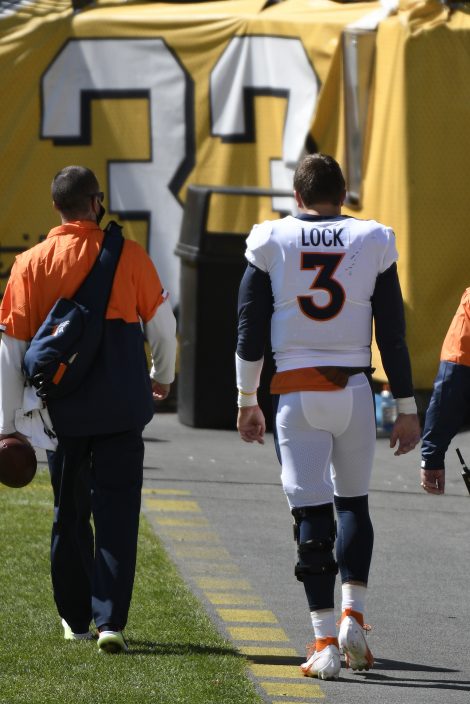 Denver Broncos quarterback Drew Lock (3) walks off the field with a team trainer after being injured during the first half of an NFL football game against the Pittsburgh Steelers in Pittsburgh, Sunday, Sept. 20, 2020. (AP PhotoDon Wright)

The Chiefs were short-handed on defense and in the secondary for their game against the Chargers with cornerback Beshaud Breeland serving his four-game suspension, defensive tackle Mike Pennel finishing his two-game suspension, and cornerback Charvarius Ward out with a fractured hand. Then the Super Bowl champions lost defensive end Frank Clark to an illness and cornerback Antonio Hamilton to a groin injury as they mounted a second-half comeback and won in overtime.

Along with Lock and Sutton, the Broncos lost defensive end Dre'Mont Jones to a knee injury in their defeat at Pittsburgh.

The Colts, who lost running back Marlon Mack to an Achilles tendon injury last week, may have lost two more starters for the season against Minnesota. Campbell was carted off after taking a blow to his left knee and Colts coach Frank Reich said it “didn't look good,” while safety Malik Hooker left in the second half with his own Achilles tendon injury.

The Colts also played without cornerback Rock Ya-Sin, who was sent to the hospital with a pregame stomach ailment.

Minnesota had to finish without running back Mike Boone (concussion) and linebacker Anthony Barr (shoulder).

The Falcons are hopeful offensive tackle Kaleb McGary merely sustained a sprained MCL in their last-second loss to the Cowboys. Defensive end Takk McKinely left with a groin injury, linebacker Foye Oluokun injured his hamstring, and safety Ricardo Allen was lost to an elbow injury.

Washington guard Brandon Scherff, who left early in Arizona with a knee injury, was among the offensive linemen hurt around the NFL on Sunday. The Rams' Joe Noteboom (calf), the Eagles' Isaac Seumalo (knee), Packers center Corey Linsley (hand) and Jaguars center Brandon Linder (knee) also went down with injuries.

Washington No. 2 pick Young injures groin in loss to Browns