Lamar Jackson threw a touchdown pass, Mark Ingram ran for a TD and the Baltimore Ravens added a score on defense to to beat the mistake-prone Houston Texans 33-16 on Sunday.

The victory is Baltimore’s 14th straight in the regular season, the longest streak in the NFL since since Carolina won 18 in a row in 2014-15. 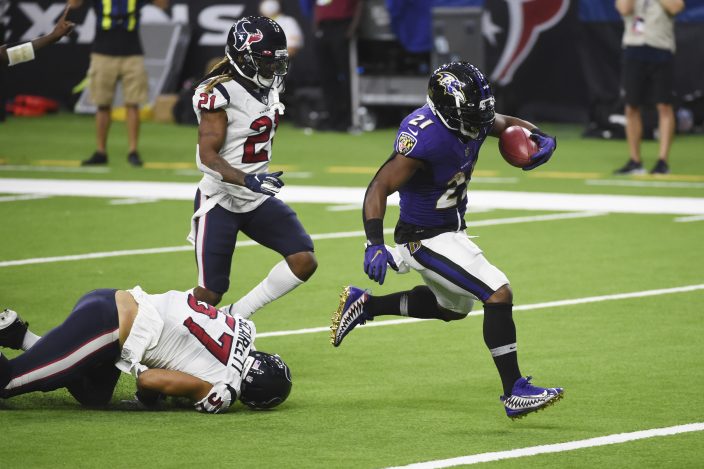 Baltimore Ravens running back Mark Ingram (21) runs for a touchdown against the Houston Texans during the second half of an NFL football game Sunday, Sept. 20, 2020, in Houston. (AP PhotoEric Christian Smith)

Ingram punched and roundhouse-kicked a picture of Houston’s mascot on the wall in the end zone to celebrate the score that was the knockout blow.

The Ravens built a 20-10 halftime lead with the help of a fumble return for a touchdown in the second quarter by L.J. Fort.

Deshaun Watson threw for 275 yards and a touchdown, but also threw an interception and was sacked four times and hit 13 other times for the Texans (0-2), who played their home opener without fans because of the coronavirus pandemic. 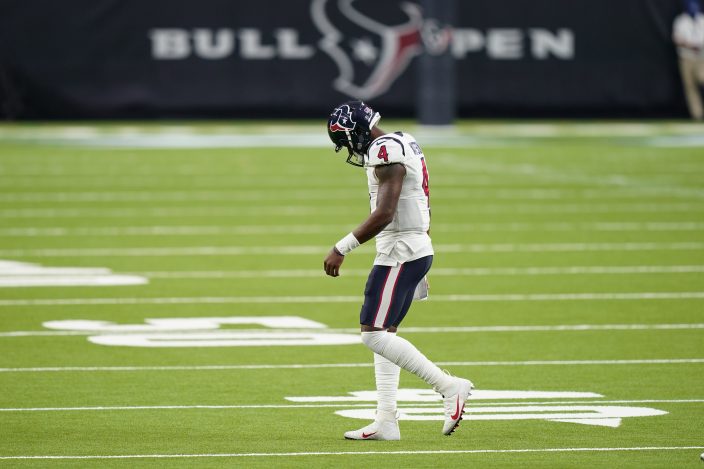 Houston Texans quarterback Deshaun Watson (4) walks off the field after failing to convert on a third down against the Baltimore Ravens during the second half of an NFL football game Sunday, Sept. 20, 2020, in Houston. (AP PhotoDavid J. Phillip)

Jackson threw for 204 yards and had 54 yards rushing on a day when the Ravens outrushed Houston 230-51.

The Ravens were up 3-0 when Houston went for it on fourth-and-1 from their 34 late in the first quarter. Watson’s pass was incomplete, giving the Ravens a short field.

Four plays later, Jackson found Patrick Ricard for a 1-yard touchdown to extend the lead to 10-0.

The Texans cut the lead to three when Watson connected with Darren Fells on a 10-yard touchdown pass. That score was set up by Brandin Cooks' 38-yard reception two plays earlier.

The Ravens added a field goal before Keke Coutee made a short reception and Marlon Humphrey knocked the ball out of his hands. Fort scooped it up and ran 22 yards for a touchdown to make it 20-7 with about five minutes left in the first half.

Houston’s next drive also ended with a turnover when Marcus Peters made a diving interception. 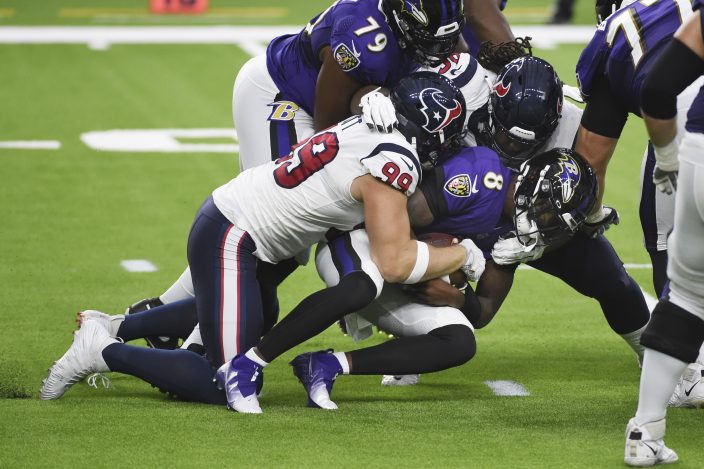 Jackson was sacked twice on Baltimore’s next drive and the Ravens had to punt. The Texans added a field goal as time expired to cut the lead to 20-10 at halftime.

Baltimore added a field goal midway through the third quarter and the Texans cut the lead to 10 with a field goal early in the fourth before Ingram’s score.

Texans: FB Cullen Gillaspia left the game in the second half to be evaluated for a concussion and didn’t return.

Houston coach Bill O’Brien, Watson and several other Texans knelt during “The Star-Spangled Banner” after the team chose to stay in the locker room while the anthem was played in the season opener. Many Ravens players also knelt during the anthem.

Houston defensive end J.J. Watt had two sacks to give him 26 multi-sack games in his career, which is the most in the NFL since 2011. The three-time NFL Defensive Player of the Year also hit Jackson three other times and swatted down one of his passes in the fourth quarter.