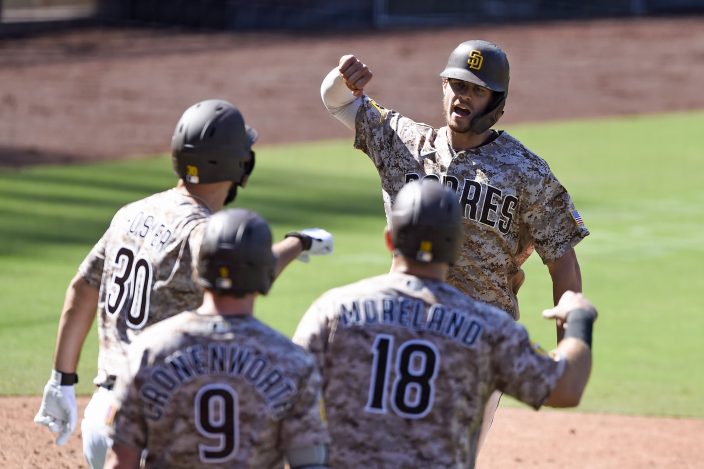 The loss by Seattle also locked up an American League playoff berth for the New York Yankees.

Each team scored in the 10th inning and the Padres started the 11th with Manny Machado on second base. Moreland, obtained in a trade with Boston on Aug. 30, lifted an opposite-field fly down the left-field line off Casey Sadler(1-1) and it dropped just in front of Tim Lopes. Machado, who held up halfway to third, hustled around and scored for a 5-4 lead.

The Padres added on with Jurickson’s Profar RBI single and an error by second baseman Dylan Moore. 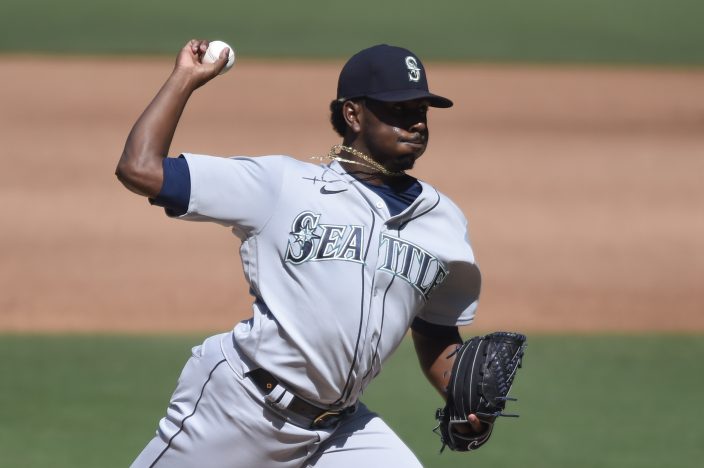 The Padres last reached the playoffs in 2006, when they won the NL West for the second straight season and were eliminated by the St. Louis Cardinals for the second consecutive year.

It’s been so long since the Padres played in the postseason that two members of that team, closer Trevor Hoffman and catcher Mike Piazza, are in the Hall of Fame. One of that team’s outfielders, Dave Roberts, is in his fifth season managing the rival Los Angeles Dodgers.

San Diego took a 3-1 lead on a 430-foot, three-run homer by Wil Myers, their longest-tenured player, into the shrubs in front of the batter’s eye in straightaway center field. 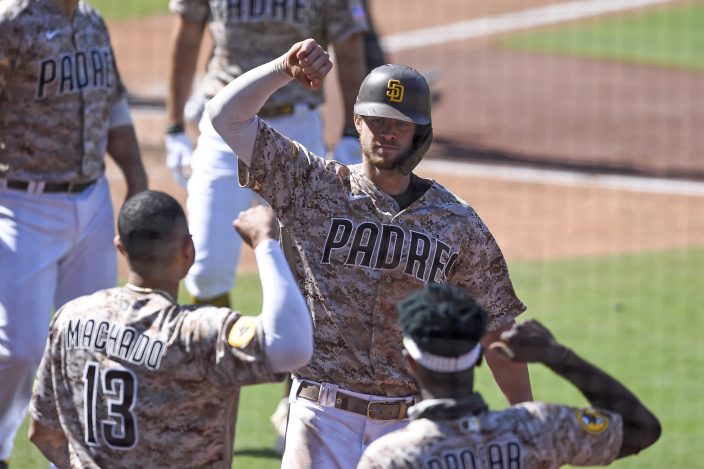 San Diego Padres' Wil Myers (4) is congratulated by Manny Machado (13) and Jurickson Profar (10) after hitting a three-run home run during the sixth inning of a baseball game against the Seattle Mariners Sunday, Sept. 20, 2020, in San Diego. (AP PhotoDenis Poroy)

The Mariners tied it when Moore, who struck out three times against starter Dinelson Lamet, hit a two-run homer to left off Emilio Pagán in the eighth.

Lamet held Seattle to one run and two hits while striking out 10 and walking two in six innings.

Fernando Tatis Jr. hit a go-ahead single in the 10th before J.P. Crawford hit a sacrifice fly in the bottom of the inning.

The Padres drew three walks in the first four innings from starter Justin Dunn, who also hit a batter with a pitch. San Diego stole three bases as well, but failed to score.

The Padres finally broke through in the sixth. Eric Hosmer drew a one-out walk and Moreland hit a ground-rule double with two outs before Myers homered on a 2-2 pitch to put the Padres ahead 3-1. It was his 14th.

Myers knew it was gone, and center fielder Kyle Lewis retreated to the warning track before turning and watching the ball sail well over his head.

Padres: RHP Mike Clevinger, whose scheduled start Saturday night was skipped because of tightness in his right biceps, will throw a bullpen Monday, which is an off day. If everything goes OK, he’ll likely start Wednesday at home against the Angels. ... RHP Austin Adams was activated from the injured list. He was on the 60-day IL recovering from left knee surgery when he was obtained as part of a seven-player trade with Seattle on Aug. 30.

Mariners: LHP Marco Gonzales (6-2, 3.49 ERA) is scheduled to start Monday night in the opener of a three-game home series against the Houston Astros.

Padres: RHP Zach Davies (7-3, 2.69) goes Tuesday night in the opener of a two-game home series against the Los Angeles Angels.